by Noell from Newark

My hero is Peter Pan, yes Peter Pan. He may not be like other famous heroes. For example, a famous basketball player or a football player, but to me he is a true hero. Peter Pan is my hero because he inspired me to take a risk at adventure, and to believe in myself. Also, no matter how old you are, you can still have fun like a kid even though you grew up. "All children, except one, grow up" -J.M. Barrie, Peter Pan.

For me growing up isn't a bad thing because when you grow up you get more responsibilities. Growing up is good because you get to explore more, and be successful in life. In Peter Pan's perspective growing up is not optional. For me there is a time to grow up, but also every now and then its fun to be a kid again, and to have those special moments. Peter Pan feels the only way to have adventure is to stay young, but our adventure is taking on the world while growing up.

Although the character was written by J.M. Barrie, Peter Pan the cartoon character was made by Walt Disney. Peter Pan is a young boy who doesn't want to grow up. He is incredibly adventurous and daring. When his friends are in danger, especially his sidekick Tinker Bell, he is far more mature than any adult can be. He likes to humiliate Captain Hook and his crew. Peter Pan is heroic, fun, charming, and brave.

For me Peter Pan has done a lot in my life. He helped me take on adventures that i was to scared to take. He also taught me that it's okay to grow up, but you're always a kid on the inside. Peter Pan is full of joy and wonder, he knows when to be an adult and a kid but never in between. "..children know such a lot now, they soon don't believe in fairies, and every time a child says, 'I don't believe in fairies,' there is a fairy somewhere that falls down dead."  J.M. Barrie, Peter Pan. This quote shows that when you don't believe something, something dies off inside of you. As i grow up i know I will never lose my imagination, just like my hero Peter Pan. 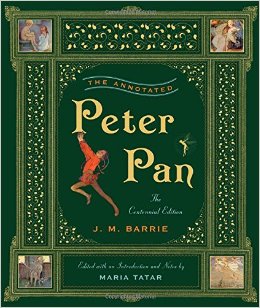