SANTA MONICA, CA – 9/20/14 - On September 20, The MY HERO PROJECT honored a unique group of peace activists at its Annual Peace Day celebration in Santa Monica, carrying out its mission of inspiring audiences around the world with true stories of heroes.  International Day of Peace was dedicated by the United Nations as a day devoted to uniting people in pursuit of peace, and this MY HERO peace event, which is available to view at www.youtube.com/myhero, promotes that transcendent purpose.
Mohammed Sidibay hosted The MY HERO Project's peace event, giving his audience a new dimension on peace activism.  After recounting the horrors of his childhood in which he was forced into  slavery as a child soldier at age 3,  suffering humiliation, cruelty, abuse and violence, he took his audience step by step through the stages of his own personal growth and enlightenment:  forgiveness, compassion, purification, serenity, surrender and finally escape.   He tells his story  with a depth of feeling and humor, honoring his own personal heroes who also spoke at the event.  "I'm going to introduce you to some of the people I've met through MY HERO who inspire me to be the voice of the voiceless, to be an activist, to keep the faith...  the people who remind us, in Anne Frank's words, that "nobody need wait a single moment to improve the world." Members of the audience could not help feeling that they were  listening to a modern day young James Baldwin or Martin Luther King.

photos from Beyond Borders Documentary featuring Mohamed Sidibay
WHAT PEACE MEANS TO A FORMER CHILD SOLDIER
"To tell the Truth,"  is the resounding answer to many of the questions posed at  the MY HERO Peace Event,  including what each one of us can do to achieve peace.  At the Peace celebration, Robert Shutterly was introduced as a peace activist who,  through his brilliant artistry as a  portrait painter,  tells the history of American heroes who have embodied courage, honesty, tolerance, generosity, wisdom and compassion throughout our nation's history by virtue of their "truth telling."  These Americans, who "tell the truth"  carry the legacy of what Shetterly explained during the MY HERO Peace Event, as "the responsibility of all of us, all of us, to try to make a safer and more peaceful world."  (See http://www.americanswhotellthetruth.org.)

ROBERT SHUTTERLY IS APPLAUDED FOR HIS ARTISTIC PORTRAITS OF 'AMERICANS WHO TELL THE TRUTH'
Robert Shetterly speaks at MY HERO's International Day of Peace Celebration
As part of the Peace Event, Mohamed Sidibay introduced his hero Erin Gruwell, the author of The Freedom Writers Diary,  the first book Mohamed read after  arriving in the United States following his rescue.   Gruwell was praised for her educational program which teaches tolerance, compassion and peace in the classroom to students who, like Mohamed,  are all too familiar  with poverty and violence, but who, unlike Mohamed grew up in United States.  Gruwell told Mohamed how proud she was of him and his amazing journey to peace.

ERIN GRUWELL IS HONORED AT MY HERO'S PEACE EVENT
Erin Gruwell speaks at MY HERO's International Day of Peace Celebration
As Sidibay points out in the MY HERO Peace Event, one of the biggest challenges facing humanity is how to forge peace, transcend boundaries and unite people in order to educate the human race on how to save our planet.  He asks: how can we change our behavior so we learn to  protect and preserve our earth's limited natural resources?  Award winning filmmaker, musician, technology wizard  and visionary  Kenji Williams answers this question by offering up his multi media project "BELLA GAIA".  Translated as "Beautiful Earth", Bella Gaia must be experienced to be believed.  It constitutes a collaboration with institutions such as  NASA, the Smithsonian, and the Denver Museum of Nature and Science.  It is being shown in venues around the world, changing lives one by one by the very experience it imparts to the viewer.  Williams's  concept is to combine in a synchronistic   sensory experience  photos, film, music, and scientific data including  views of our planet from distinct vantage points such as  astronauts in outer space, from the ocean itself, the rivers, the animals.  The effect, which is magical, is to impart and transmit the sense of oneness between the observer and what is being observed.
The depth of this witness state gained by the observer, results in creating a direct relationship between the observer (earth inhabitant) and the living, breathing " Bella Gaia,"  which is being inhabited.  Neuroscientists have discovered that this reduction- i.e. the observer and the observed become one, creates the neurological transmission necessary to create a loving relationship between our planet and its inhabitants such that each of us experiencing the connection, will forevermore be changed.  We will gain respect, love, tenderness and empathy for our planet (as a parent has for its own child)  and in turn will we be transformed into stewards of the earth.  The end result is that each of us will become physically linked and will act toward our planet in a way to  protect, defend and save our resources.  Kenji Williams, through his brainchild "BELLA GAIA," promotes peace and has become one of The MY HERO PROJECT's celebrated Peace Heroes.

Ron Kovic, the Vietnam war veteran who became a peace activist upon his return home from Vietnam and  whose life and  heroism are the subject of the award winning film "Born on the Fourth of July", appeared at the Peace Event to announce this year's winner of The MY HERO International Film Festival Peace Prize.  Kovic selected  the film "Blessed is the Peacemaker" which examines a Baltimore outreach program in which former gang members mentor local youth to give up their tendency to commit crimes.  The result of the program was to drastically reduce the incidence of violent crimes in that city.  Kovic gave a moving speech at the MY HERO Peace Event ,  reminded his audience  that the trademark of a peacemaker is courage, to stand up for one's beliefs, to take risks for what one believes in, to be willing to accept the consequences of one's truths. 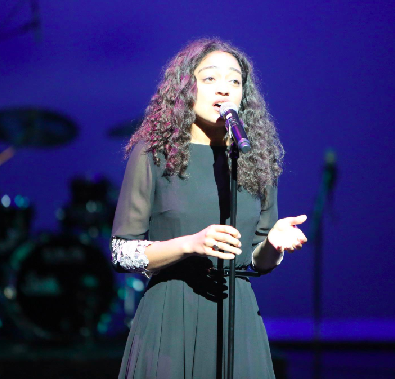 Rising Star finalist Dana Williams sings at the MY HERO International Day of Peace event. (The MY HERO Project) 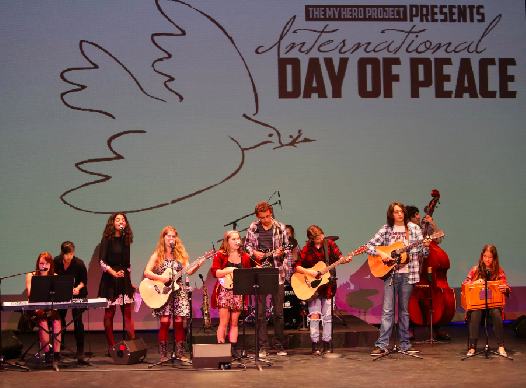 The New Roads Folk City Group sang at the MY HERO International Day of Peace event. (The MY HERO Project)