In high school, my father and I used to stay up late finishing my physics homework until every problem was solved. Many nights he kept working long after I went to bed frustrated, plugging away at a particularly illusive problem. Perseverance is a defining characteristic of someone with physics training. And having attended graduate school for physics, my father was not to be stumped by high school problem sets, which he would jokingly refer to as "baby problems". When unable to conquer one of my "baby problems", however, he'd stand up muttering, and rifle through the bookshelf that housed his old college texts, dragging out his go-to reference on such occasions: the classic Feynman's Lectures on Physics, a comprehensive three-volume set of introductory physics, based on a two semester class that Richard Feynman taught to freshman physics majors (and to the entire physics faculty for that matter) at Caltech shortly after the Second World War. "This is good stuff", I remember him saying about those yellowed, first-edition paperbacks. Over the years, as I became more and more interested in physics and learned more about the history, it became clear that not only was the author of my father's sacred college texts one of the most influential scientists of the 20th century, he was hands-down the most entertaining!!

Richard P. Feynman, the American physicist made famous for his theory of quantum electrodynamics (QED), for which he was rewarded a share of the Nobel Prize in physics, and his reformulation of quantum mechanics that completely revolutionized our conceptual understanding of the physical world. But above all, he was a great teacher endowed with a hopelessly attractive and idiosyncratic character, which seemed to fly irreverently in the face of popular conceptions of what it means to be a physicist: somber, subdued, and anti-social intellectualism. Feynman managed to embody the antithesis of such stereotypes, while at the same time conducting consistent world-class scientific research that touched on almost every fundamental advance in physical theory. As the mathematician Freeman Dyson famously wrote home to his parents while spending time with Feynman at Princeton that he was "half genius, half buffoon," and eventually changed this to "all genius, all buffoon."

It was his fun-loving and child-like curiosity with nature, disdain for pretension and hypocrisy that charms the aspiring physicist into admiration. Feynman makes physics fun. And before I even enrolled in my first rigorous math or physics class I had read mostly all of his popular physics books, each one reinforcing my own innate sense that the study of nature is, at its core, a playful exercise in which everyone, lay or expert, can participate and understand. A brilliant mathematical physicist himself, Feynman's life philosophy exalts the virtues of diverse human experience instead of cold academic pursuit. His playful antics are well known in the physics community. Working as the youngest, and most gifted, theorist on the Manhattan Project at Los Alamos, Feynman would terrorize his colleagues by cracking their safes for fun, and by keeping them up at night, banging on his bongo drums well after curfew.

Make no mistake: Richard Feynman was a once in a generation physics prodigy. Born in the Far Rockaway neighborhood of Queens, NY, Feynman was a precocious youth, making a name for himself with friends and neighbors repairing radios and other electronics, and his extraordinary abilities in mathematics were apparent from an early age: he filled notebooks deriving equations, and taught himself calculus and advanced trigonometry before high school. "His notebooks contained not just the principals of these subjects but also extensive tables of trigonometric functions and integrals - not copied but calculated, often by original techniques that he derived for the purpose. When his classmates handed out yearbook sobriquets, Feynman was not in contention for the genuinely desirable Most Likely to Succeed and Most Intellectual. The consensus was Mad Genius." At M.I.T, where, his undergraduate institution, Feynman was famous with the physics faculty for many times outsmarting them in front of the class, solving problems faster, and more creatively than the professors. Despite his Feynman's obvious brilliance in the physical sciences, Princeton was initially reluctant to take in on as a PhD candidate due to the fact the he was Jewish before finally accepting him. At Princeton, Feynman worked the famous theorist John Archibald Wheeler, the physicist who coined the term "black hole", on fundamental reformulations of quantum mechanics that would lead to his famous QED theory. Before finishing his doctoral work, Feynman was recruited to participate in the Manhattan Project, and quickly impressed the all-star team on physicists assembled at Los Alamos, included Oppenheimer and Hans Bethe. After the war, Feynman followed Bethe back to Cornell to teach, and later joined the faculty at Cal Tech, where he would spend the rest of his life with research and teaching. As one biographer later wrote of his revolutionary Cal Tech freshman physics lectures: "No scientist since Newton had so ambitiously and so unconventionally set down the full measure of his knowledge of the world." Indeed, the lectures were so advanced, that "as the course wore on, attendance by the kids at the lectures started dropping alarmingly, but at the same time, more and more faculty and graduate students started attending, so the room stayed full, and Feynman may never have known he was losing his intended audience." And it was Feynman who, very late in his life, solved The Challenger space shuttle disaster with unerring intuition and simple demonstration before the presidential commission. Indeed, throughout his remarkable career as a scientist, Feynman's work traces much of the progression of 20th century physics.

In my studies in physics I found that, unlike many who enter the field, my personal path to physics was not a life-choice, planned, and executed as a purely academic goal. I like to think of physics as a beautifully human activity that gives rigor to mankind's natural and sometimes chaotic curiosity for nature. The curiosity that led Feynman to unify quantum field theory with relativistic electrodynamics is the same curiosity that made him wander into topless bars and experiment with marijuana and sensory deprivation tanks. Feynman is a hero of mine because he had the rare ability to put science in its natural place within the human condition. Not as an obscure and unnatural intellectual exercise, but as the ultimate and most noble expression of human curiosity. What is reality? How do you pick up a woman at a bar? To Feynman these were two seemingly disparate questions are on an equal footing. And he was, and continues to be, the most articulate advocate of this perspective.

Now, as I look back with a little more physics under my belt, but still with a frustrating ability to get stumped on clever introductory physics problems, I know what my dad meant by, "this is good stuff." For even in his treatment of elementary physical principals, Feynman is able to communicate in an original and engaging manner that employs not only his student's analytical capabilities, but also their innate sense of curiosity as human beings.

As he said himself: "The fact that I beat a drum has nothing to do with the fact that I do theoretical physics. Theoretical physics is a human endeavor, one of the higher developments of human beings - and this perpetual desire to prove that people who do it are human by showing that they do other things that a few other humans do (like playing bongo drums) is insulting to me. I am human enough to tell you to go to hell." 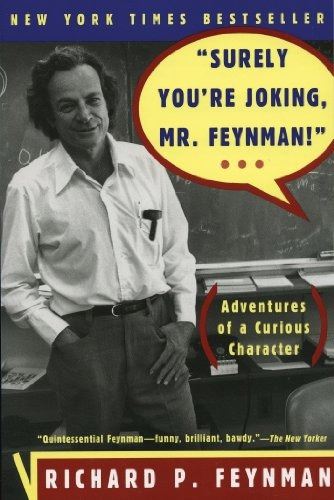