“We must use our imaginations to consider what other people's lives are like and remember
they are people just like us who want the same out of life.”
- Robert Shetterly -

Getting to know my hero, Robert Shetterly, is like looking at one of those collages where, if you stand way back, you see the face of a smiling man. But as you move closer, you realize that this face is actually made up of many others.

These other faces are Robert’s paintings, over 150 portraits that go by the title of Americans Who Tell The Truth. And they tell you everything you need to know about the artist because here lie the thoughts and words of Shetterly’s heroes.

From Presidents to drifters, musicians to soldiers, this group of Americans is accompanied by the things they’ve said or written, things the artist holds most dear: freedom and equality for all people, a reverence for the Earth and all her creatures that supersedes profit, an America that strives to live up to her promise.

A peace activist and Harvard graduate with a degree in literature, it was art that ultimately won Shetterly’s devotion. After graduating, he “went back to the land,” moved into rural Maine, started a family and started painting. The Americans Who Tell The Truth paintings wouldn’t come until much later…2001.

It was just after the bombing of the World Trade Center on September 11th and Shetterly, like many Americans was struggling to assimilate the tragedy.

“I was so upset … All I could think of were the victims. I felt helpless to do anything about it.”

And he wasn’t alone. Like most of his countrymen, Shetterly saw the events of 911 and those immediately following, as a direct attack on his country and all it stood for. He was devastated by the loss of life that day, the innocent Americans as well as the brave men and women who gave their lives in attempting to rescue them. But it was the response to the attack, the calls for vengeance and war, that motivated him to action.

“I felt I had to deal with this moment and make myself real by being engaged in the moment. And how do you do that?”

It was then that Shetterly made the decision to step forward and defend his country...only Robert's weapon of choice would be a paintbrush; his ammunition, the ideals of the great Americans who had shaped his homeland. Abraham Lincoln, Martin Luther King Jr., Rachel Carson… Americans who had stepped up and spoken out for the things Shetterly, as an American, treasured most.

Robert explains, “The best of American history has progressed because American citizens have had the nobility to demand we close the gap between what we say as a people and what we actually do. That’s what gives us our history.”

And that’s what gives “Americans Who Tell The Truth” such impact. Because Shetterly’s heroes are those people, the ones demanding we walk our talk, say what we mean and mean what we say. And they aren’t just drawn from the annals of history, many of them live and breathe and speak up for what they believe today. People like Bill McKibben, a modern day Paul Revere, warning anyone and everyone who will listen of the approaching enemy that is global warming; retired Colonel Ann Wright, who after more than 30 years of service, resigned rather than engage in a war she considered unjust; or Lateefah Simon, who advocates tirelessly for at-risk youth in her quest to "create a country that is about reverence and reconciliation, not a world of shackles and concrete cells."

One might ask how he picks these heroes. The short answer is courage.

“Everyone we call our heroes – they were all tarred and feathered with that language, humiliated, actually killed. What I’m trying to do is give some authenticity to people living today who are being discredited and humiliated. These are going to be the people that we look back on and say, ‘those are the people who stood up for our best, our humility… our nobility as a country.’”

The collection is, at first glance, a stunning body of work, stylistically consistent from portrait to portrait, not just in the portrait-accompanied-by-quote template, but in that each likeness tells a little bit about its subject. Betty Burkes has the calm, loving look of the Aunt you’ve always adored. Lily Yeh’s eyes are a little sad, her lips bent into a Mona Lisa smile that says, “Yeah, it’s not perfect, but together we can make it better.” And more than thirty years after her death, through the prism of Shetterly’s paint, Fannie Lou Hamer can still back you up a step with the resolve in her gaze. I’ll never forget the first time I saw that one. I’d never heard of Fannie Lou Hamer, but I liked the fire in her eyes, the way she held herself, so I couldn’t resist looking a little closer to read what she’d said: “Sometimes it seem like to tell the truth today is to run the risk of being killed. But if I fall, I'll fall five feet four inches forward in the fight for freedom. I'm not backing off.”

It’s good to be reminded from time to time, that people have fought and died for the freedoms I take for granted. It’s good to look into the fierce gaze of a black woman and remember all the advantages that fell into my lap at birth. A couple other heroes of mine, my mom and dad taught me a lesson that reverberates in the words and works of these great Americans: that when we forget our blessings we risk losing them.

I asked Robert to single out a hero for this story, a task that, as you might imagine, took no small amount of consideration. After some thought, he said, “Howard Zinn” (author of A People’s History of The United States: 1492 – present). “The reason is because he’s probably done more than anybody to tell the real stories about American History – put it in one place where anybody can read the real story. We are the stories we tell… Dishonest stories handicap us. Howard Zinn got people to think about what the real stories are.”

“I am not painting extraordinary people to be idolized, but, rather, ordinary people, people like all of us, who make choices to do the right thing. People who are role models. Not saints. Flawed, everyday people who act with courage. That’s what helps the world become a better place: courage. And the survival of our democracy depends on all of us making the choice for courage.”

In the words and teachings of his subjects, in the way he lives his life, my hero Robert Shetterly has shown me what courage looks like. With his collection of “Americans Who Tell The Truth,” he’s reminded me what it means to be a citizen of the United States of America. He’s shown me that patriotism is less about being great than striving to become greater. He’s given me something for keeps; a gift that grows the more it’s given: the truth.

EXCERPT FROM A CLASSROOM VISIT
BY ROBERT SHETTERLY

Annie said, “I liked these paintings for all the same reason. The reason was that these people that you painted went beyond what anybody thought they could do to help change things in our world. They changed the way that we look at things now. I am glad that you gave them these tributes. I hope someday I can help the world like they did.”

And then Annie read her poem.

Annie’s poem beautifully sums up the entire intent of this project. It’s all about choices.

About courage. Everything from confronting a bully who is berating a classmate to committing civil disobedience to challenge a bad law. We have those choices nearly every day. And she understood a further intent --- that I am not painting extraordinary people to be idolized, but, rather, ordinary people, people like all of us, who make choices to do the right thing. - RS 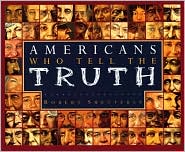