by Becky from Spokane 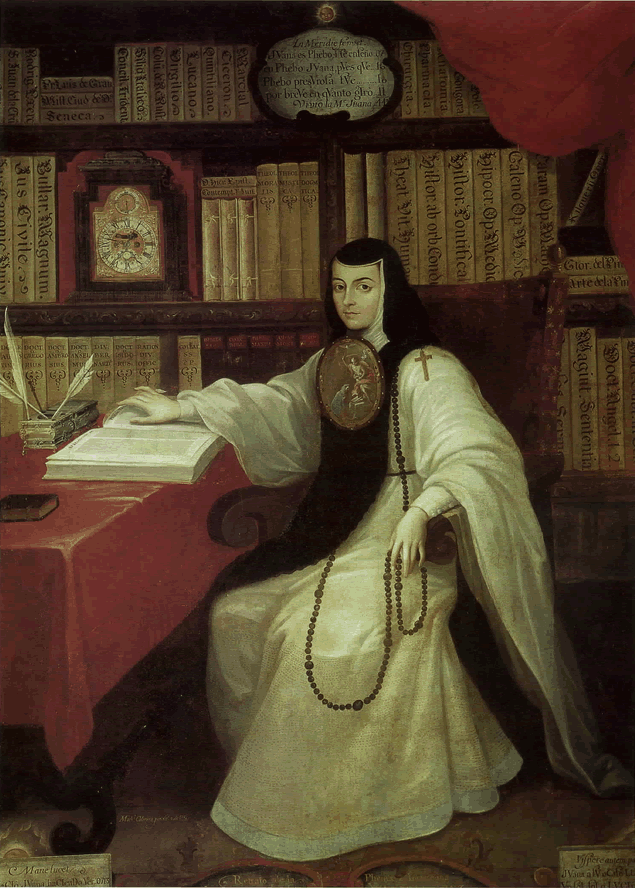 Sor Juana Ines de la Cruz in her libraryMiguel Cabrera [Public domain] via Wikimedia CommonsMy hero is Sor Juana Inés de la Cruz. Sor Juana was a famous Mexican writer, poet, nun, and influential women's rights leader from the late 17th century. Sor Juana grew up in a Catholic family and was always praised for her intelligence. Although she was sought by many promising men, she decided to decline marriage and wished to pursue her love for education in the convent. For the rest of her life, she remained in the Convent of Santa Paula, receiving a well-versed education, which shaped her compelling writing style.

The most empowering part of Sor Juana's life is based in her writing. Sor Juana constantly produced literature works on women's freedom and women's rights. In particular, she criticized "holy men" for condemning prostitutes while, in the meantime, they were privately hiring them for themselves. Sor Juana also wrote a few literary works such as Los Empeños de una casa. This novel is about a brother and sister trapped in a web of love. The themes of love and jealousy in the story are common themes throughout Sor Juana's writing. Not only did Sor Juana write, but she also found the time to teach music and drama to the girls attending Santa Paula's school.

During the Counter Reformation, Sor Juana expressed her opinionated responses (which contradicted the intentions of the church), through her writing. Anyone wishing to object to the church would be condemned and reprimanded for such behavior. Sor Juana, of course, was attacked in 1690 for some of her comments to the sciences and was told to focus on theology. This backlash from the Catholic Church, however, did not detain Sor Juana from impacting the world of Spanish and Mexican literature.

The reason I find Sor Juana so intriguing is that despite being attacked by the Catholic Church, she still surpassed any religious opinions that could possibly condemn her for her literary achievement. Although Sor Juana lived in Mexico, she influenced Spanish 17th literature and was one of the most prominent woman writers of her time. During a time when gender was associated with power, I think that it's impressive that Sor Juana went beyond the power limits of women and made an impact on the Catholic Church and the Spanish-speaking world. Although her actions were controversial, she created poetry and literature that celebrated the knowledge and reasoning of women. By being an opinionated woman, Sor Juana did suffer some consequences for her outspokenness and was pressured to sell her literary works, renew her religious vows, and sign penitential documents.

This that you see, the false presentment planned
With finest art and all the colored shows
And reasonings of shade, doth but disclose
The poor deceits by earthly senses fanned!
Here where in constant flattery expand
Excuses for the stains that old age knows,
Pretexts against the years' advancing snows,
The footprints of old seasons to withstand;

'Tis but vain artifice of scheming minds;
'Tis but a flower fading on the winds;
'Tis but a useless protest against Fate;
'Tis but stupidity without a thought,
A lifeless shadow, if we meditate;
'Tis death, tis dust, tis shadow, yea, 'tis nought.