by Daniel from Sulphur

Young cat, if you keep your eyes open enough, oh, the stuff you would learn! The most wonderful stuff!

An author, cartoonist, activist and literacy advocate, Dr. Seuss was born to Henrietta Seuss and Theodor Robert Geisel on March 2, 1904. They named him Theodor Seuss Geisel after his father and mother. His father was a parks superintendent in charge of Forest Park, a large park and zoo in Springfield, Massachusetts, as well as a brewmaster. In his lifetime, Dr. Seuss gained great acclaim for his poetic, imaginative, and revolutionary children’s books. He also wrote political cartoons, helped in the World War II cause, strongly opposed racism and fascism, and improved the literacy of our nation.

As a student of Dartmouth College, he became editor-in-chief of the Dartmouth Jack-O-Lantern, the school newspaper. He was so passionate about writing that even after being banned from extracurricular activities for violating Prohibition, he rejoined the paper under the pen name Seuss, also his middle name and his mother’s maiden name.

Now would be a great time to introduce Geisel’s three pen names. Dr. Seuss was the most used, with fifty-one of his best books under that name from 1937 to his death. Theo LeSieg (Geisel spelled backwards) was used on Come over to My House and twelve other books, and the pen name Rosetta Stone was only used once. The pronunciation of his first pen name is debatable. He personally pronounced Seuss in the German fashion (rhymes with “voice”), though most readers mistakenly assume it rhymes with “juice.” The “Dr.” is a reference to his father’s wishes that Geisel would become a medical doctor, but instead, Geisel obtained a PhD in literature, so he should have been Seuss, PhD. 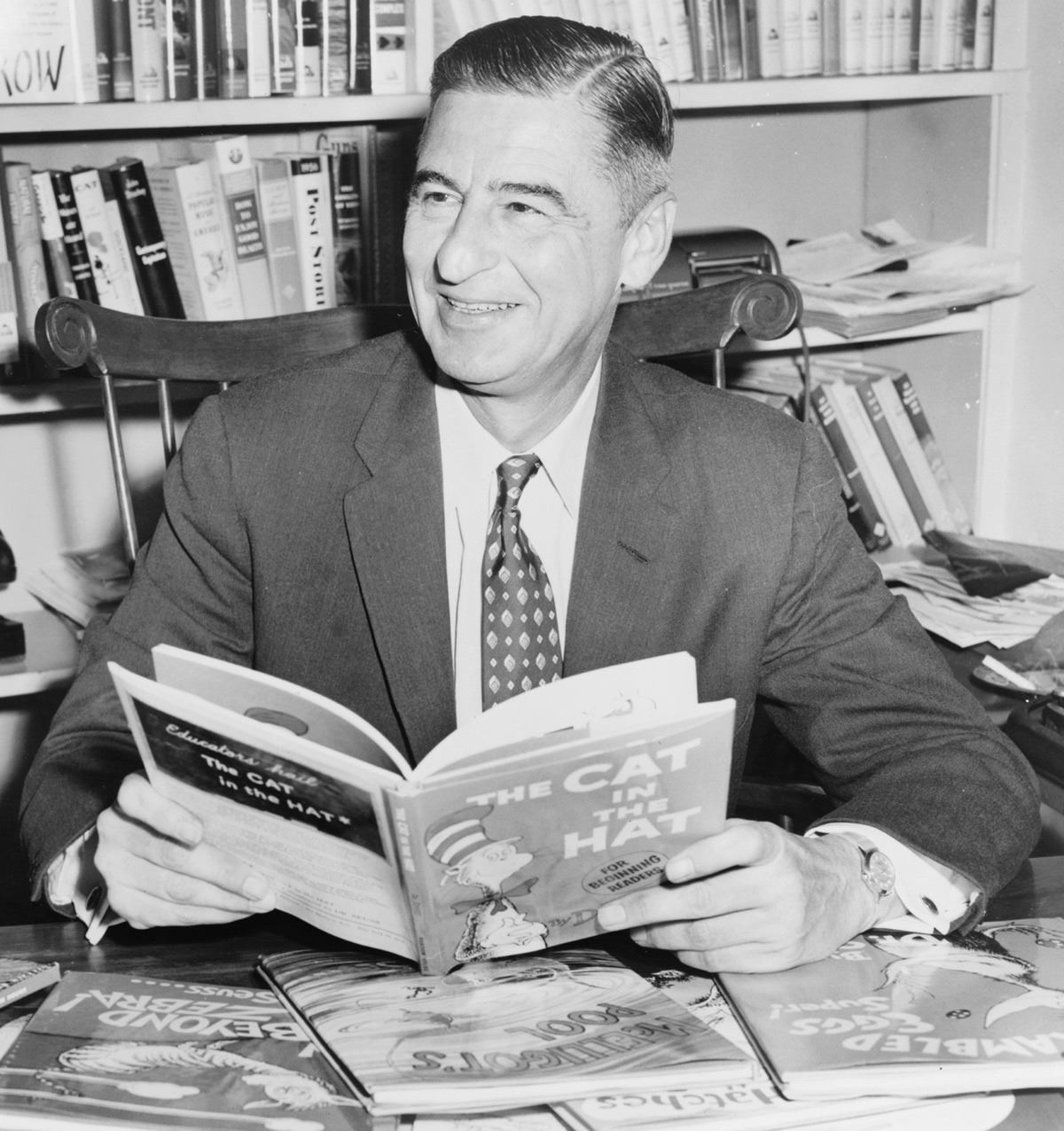 Now that we’ve cleared the murky waters of pen names, middle names, and maiden names, we can get on with Dr. Seuss’s actual career. He began his career by submitting humorous articles and illustrations to various newspapers and making advertisements for NBC, GE, and Standard Oil, and for an insecticide called Flit. He also animated a short-lived comic strip called "Hejji" and, through his articles, teased Technocracy, an economic and political movement.

On the way back from Europe, Dr. Seuss was listening to the rhythm of the engines on the ship. This triggered his creative mind to make poetry which originally became his first children’s book, And to Think That I Saw It on Mulberry Street. This book, rejected by anywhere from twenty to thirty publishers, is based on Dr. Seuss’s opinion that adults are too restrictive of children’s imaginations. Finally, it was accepted by Vanguard Press and published in 1937. He then wrote three more books before World War II. Two of those were written in prose instead of his usual poetic style. At the start of World War II, Geisel made political cartoons to attack racism, communism, the press, Congress, or anything else that he thought was making the Nazis’ job easier. However, in 1942, he chose to be wholly patriotic; in his case, that was making posters and films for the U.S. military, Treasury Department, and general public. Some of his notable films from the war era included Your Job in Germany, the 1947 Academy Award-winning Best Documentary called Design for Death, Private Snafu, and Gerald McBoing-Boing.

After the war, he continued to put into words the ideas that inspired generations of children’s imaginations. Another one of his accomplishments was writing books containing a few commonly used words, thereby making the books easy for beginning readers and increasing the literacy rate. His skill at this became legendary; The Cat in the Hat was written using words from a list of 223 important words that Dr. Seuss and his publisher compiled after reading an article about illiteracy. He topped that feat by using a list of only fifty words to write Green Eggs and Ham, according to legend. Dr. Seuss made these easy books fun to read by using a rhythm known as anapestic tetrameter in many of his books. 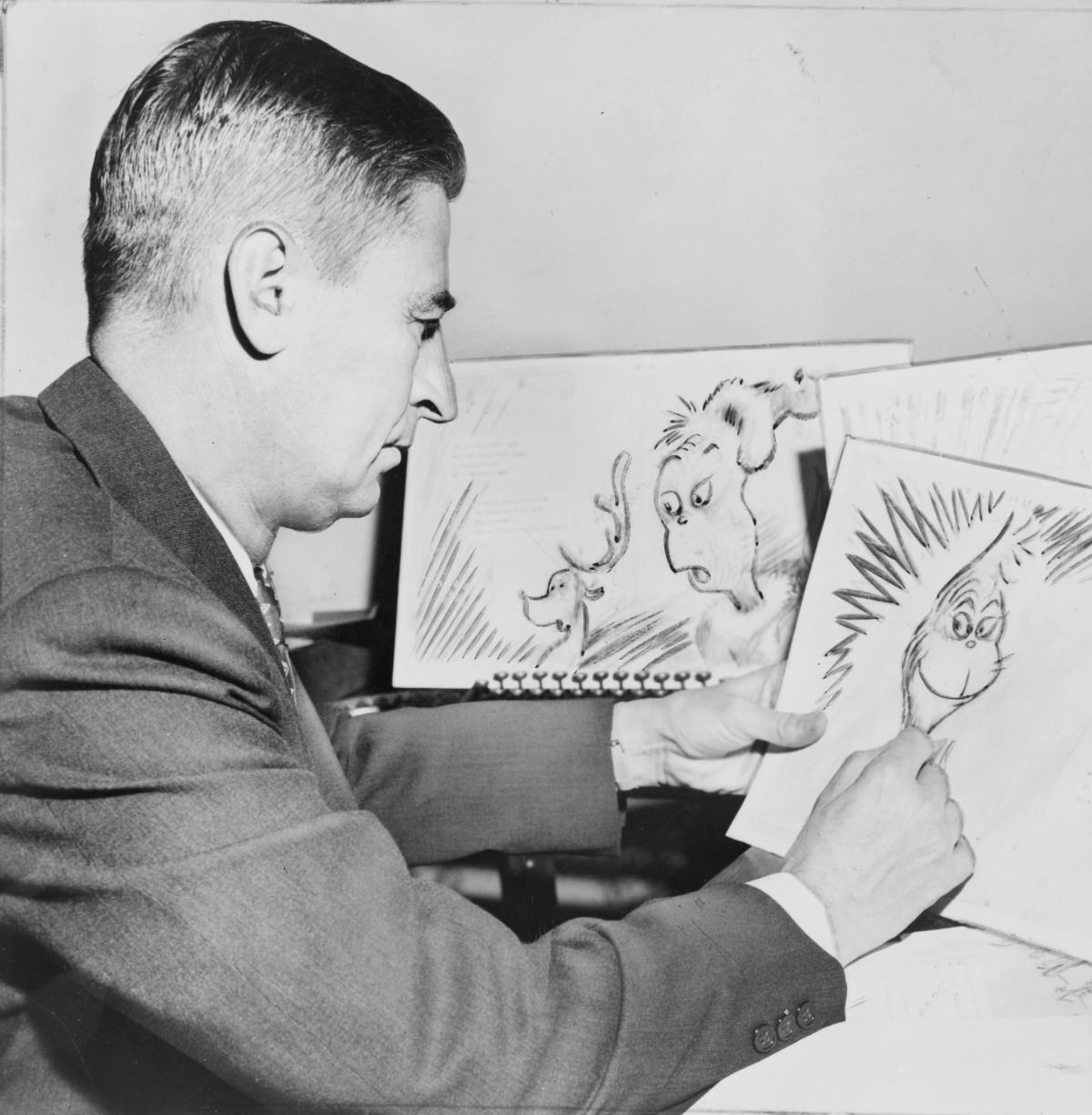 Theodor Geisel (Dr. Seuss) drawing How the Grinch Stole ChristmasAl Ravenna, World Telegram staff photographer / Public domainGeisel’s political views are seen by some as having contaminated some of his children’s books. For example, some critics say that The Lorax and Thidwick the Big-Hearted Moose promote environmentalism, The Sneetches anti-discrimination, The Zax parodies politicians in general, The Butter Battle Book parodies the Cold War, and How the Grinch Stole Christmas is anti-materialistic. Dr. Seuss and his wife, who are pro-choice, were enraged enough to file a lawsuit in Canada about the use of the quote “A person is a person, no matter how small” from the book Horton Hears a Who. Interestingly enough, though he wrote the huge best-sellers Green Eggs and Ham, The Cat and the Hat, and One Fish Two Fish Red Fish Blue Fish, Dr. Seuss never won the Newberry or the Caldecott Medal, the two highest honors in children’s literature.

Even in his later life, Dr. Seuss never slowed down on his writing. Oh, the Places You’ll Go!, the last book Seuss ever wrote, was published only a year before his death after a long battle with cancer. He had no intention of stopping, either. He had four books in various stages of production when he passed away in 1991, each of which were found, completed, and published posthumously. At the start of his career, he did not like his characters portrayed outside of their original settings, but after World War II, he began to use cartoons. Horton Hatches the Egg was first in 1942. In 1966 and 1970, Seuss trusted friend and cartoonist Chuck Jones to make films of How the Grinch Stole Christmas! and Horton Hears a Who! Eight television specials, a foreign short film, two live-action films, a Broadway musical, one more animated film, and two television programs were also adapted from Dr. Seuss's books.

I hope that you now see why I chose this unusual hero. It took dedication and perseverance to live the life of Dr. Seuss. His books and their adaptations have gained acclaim for over seventy years. He was definitely a character, but wouldn’t the world be so much better if we, like Dr. Seuss, chose to make a difference in the world by inspiring children to do the same?

Read Across America - National Endowment for the Arts Official Website: Celebrating reading and literacy in the classroom, library, and school
Seussville - This is Dr. Seuss's official website.
The Quotations Page - See the wisdom of ten great Seuss-isms.