So says this courageous young adult from South Africa. Thembi Ngubane was diagnosed with HIV/AIDS two years after contracting it. At the age of 19, she was one of several teenagers interviewed by Joe Richman of NPR. Joe offered Thembi the opportunity to chronicle her day-to-day experiences by giving her a tape recorder. What resulted is the fascinating, moving and inspiring story of a young woman's honest grappling with this fast-expanding, world-wide disease.

"My mother, she clothed me, fed me, raised me, and now, at the end of the day, she must also bury me. I was supposed to be the one who was going to look after her.... That is not right.

My mother always said that you must be tough. Even if you are feeling hurt. You must not always be jelly belly, cry, cry, cry, cry."

"Telling my dad was one of the hardest things I have ever done. But I didn't want to cry. He must see, just a tough face. I wanted him to see that I was not afraid. That I was going to be ok."

After Thembi had gathered the courage to tell her father of her illness, she asked him, "Before in the past, there was no epidemic like AIDS. But now people are suffering from it. How do you and the other old people think about it?"

"Ok. It's hard for us, we old people. You grow the kid up now, tomorrow the kid is dead. You see, that's why I get angry of this disease. There was no problem before, but now there becomes a big problem," her dad replied.

When hearing her news, Thembi's father accepts it with stoic sadness.

Thembi, however, has not given up hope in her life. Her boyfriend, Melikhaya, and her baby girl give her joy and a reason to keep fighting her disease.

And because of finding her voice through Radio Diaries, Thembi can offer hope and support to others. Her gentle, cheerful voice has become familiar to many who are afflicted with AIDS as well as their family members and to the community they live in. Knowledge is a powerful tool and Thembi has offered all she has learned by reaching out to help others.

Now Thembi uses her cell phone to be available to all who need her help and support.

I'm writing to you from South Africa where we are on the last leg of Thembi's AIDS Diary tour. I had not planned to send an email update, as most of you live in the US. But our two week tour of this country with Thembi and Melikhaya (Thembi's boyfriend) has turned into the most valuable thing Radio Diaries has ever done. Thembi has talked to thousands of people - in person and over the airwaves - from a high school in Soweto, to Constitution Hill in Johannesburg, to a clinic in a squatter camp on a former municipal dump, to a small village with no electricity or running water.

Thembi has been giving out her cell phone number in radio interviews and at events, and dozens of people have been calling her everyday - a woman looking for the nearest clinic, a young girl wanting to know how long she should stay a virgin. Thembi has become the host of her own cell phone call-in show.

You can find the blog, as well as info about our final Cape Town events, and hear Thembi's AIDS Diary.

As always, thanks for listening...

Thembi talks about her AIDS Diary Tour in South Africa: 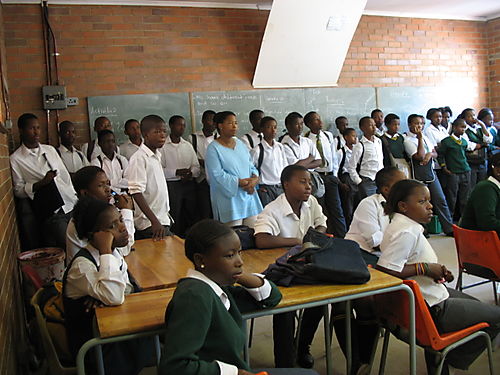 I spoke at Jabulani Technical High School to 15 and 16 year olds. Schools in this township are portrayed as a place of crime with naughty children. They were the opposite. Although they were well behaved most of them were not attentive when I began to speak.

Presenting to students in the US is different because my story is something new to them. In South Africa, kids hear about this everyday, so they are like, "Yeah we have heard that before so let's get it done and over with." I used to be the same way. The subject of HIV/AIDS felt boring and annoying and it is not unique. In South Africa it is the everyday news.

All I could think about was my daughter Onwabo sitting on one of those chairs. About myself and if I would have listened. This gave me strength, you see. By the end, the kids were so engaged they asked questions beyond the recess bell.

It filled me with pride to be in front of a mic in a studio for a South African audience. The interviewer was great although some of the callers were strange and were saying crazy stuff. Yet, speaking live on the radio made me feel that I was amongst those affected, reaching into their hearts and minds.

I was talking about living with AIDS to people that are also living with the disease or have loved ones trying to get through the day with it. People must see that denial only deepens the power of AIDS. This disease is not going anywhere until we face it. HIV/AIDS is a challenge, not a death sentence and today I realized, If it isn't me, who is it going to be?

Joe Richmond sent us the sad news today that Thembi died on June 4, 2009, at the age of 24. She will be missed by all who knew her and by the many thousands who have heard her inspiring story.

"Thembi's Diary is an animation made from a true audio documentary (NPR Radio Diaries). It is recorded by Thembi a South African girl with Aids. Although her disease is harsh for a 17 year old, Thembi talks to her virus every morning. With a calm voice she says that as long as it leaves her alone she will do the same."

Thembi's Diary - film by producer, Jisoo Kim - winner of MY HERO Film Festival 2011
NPR Interview with Thembi - by Maureen Pao
NPR - Out of Hiding, Into the World: Thembi's AIDS Diary

Radio Diaries
"The documentaries are part of Radio Diaries
(Radio Diaries), a nonprofit organization Joe Richman founded in April 1999. The idea behind Radio Diaries is to allow people to tell their own stories. "We give them the tools, turn them loose, and see what happens," Richman says. What often results is a sense of intimacy and immediacy, as Richman's subjects talk without the interruption of a narrator. 'We let one person tell their story -- about being a teen mom or an immigrant -- as a way to get behind the statistics and agendas and clichés, and just humanize it.'"
Page Tags
#aids #hiv #south africa

Joe Richman is an award-winning independent radio producer and reporter for public radio. He is the head of Radio Diaries, Inc., a not-for-profit radio production center committed to producing a new kind of oral history devoted "to finding extraordinary stories in ordinary places, and to preserving these voices for generations to come." Before becoming an independent producer, Richman worked for many years as a producer on National Public Radio programs All Things Considered, Weekend Edition Saturday, Car Talk and Heat. Currently, in addition to his work at Radio Diaries and for NPR, Joe teaches at Columbia University's Graduate School of Journalism, helping to train future generations of radio documentarians.