by Vivian from Glenbrook Middle School

"To accomplish great things, we must not only act, but also dream; not only plan, but also believe." - Anatole France 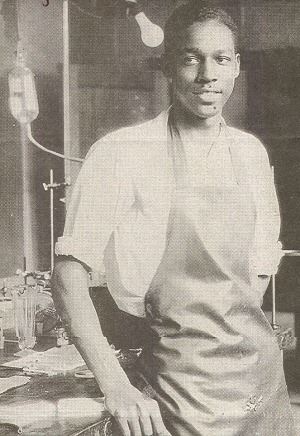 Our world is filled with different heroes who are constantly trying their best to make a difference, but what makes a hero a hero? A hero can be thoughtful, humble, resilient, outgoing, independent, perseverant, or selfless. I believe that my hero has all of these qualities. His name is Vivien Thomas.

Vivien Thomas was born in New Iberia, Louisiana on August 29, 1910. He was the son of an African American carpenter and the grandson of a slave. He later moved to Nashville, Tennessee, and graduated from Pearl High School with honors. Even when he was young, Vivien nursed an ambition to work in medicine. He worked as a carpenter’s apprentice, and also worked in an infirmary. Thomas hoped to go to college, but the Great Depression worsened, making it impossible for him to get the tuition money. However, his hopes of being a doctor never diminished. He didn’t give up and he took a job as an assistant for Alfred Blalock, who was a doctor at Vanderbilt University. Thomas tested surgical techniques on laboratory animals, and Blalock was amazed by his skill. When Blalock was offered a job as Chief of Medicine at the prestigious Johns Hopkins University, he agreed, but only if Vivien could accompany him. This way, Thomas could still work in the field of medicine without going to college. He showed he could be a good surgeon, regardless of his race, by working hard. This is one reason why Vivien Thomas is my hero, and this is how he showed his resilience, how outgoing he is, his perseverance, and his independence.

When Thomas first walked across the campus of Johns Hopkins University, many disliked him because of his race. However, he remained humble and outgoing, which inspired me to always do my best whether I face prejudice, or discouragement. In the lab, people didn’t care about Thomas’s race. They only noticed his skill.

Vivien and Blalock came to be a big part of the hospital, because they were always the ones that other doctors went to when they needed help. Soon, the pair faced a historic surgery. A cardiologist met with them about an infant, Eileen Saxon, whose blood flow was not sufficient, causing her skin to turn a bluish hue. They came up with the idea of dividing a major artery and sewing it to the pulmonary artery, which leads to the lungs. During the surgery on little Eileen, they tried their idea and it worked. While they operated, many were surprised when Blalock would not allow anyone but Thomas to stay at his right shoulder. He would always say, “Only Vivien is to stand there.”

When Blalock died in 1964, Vivien continued his surgeries and work in the laboratories. In 1971, his colleagues (who were mostly people he and Blalock helped) honored Thomas by presenting him with a portrait of himself, which would be hung next to the portrait of Blalock in the Blalock Building at Johns Hopkins.

Vivien Thomas is truly an inspiring person. Through hard work and perseverance he succeeded in making his mark in the world. Vivien proved that nothing can stop you from making your dreams come true, by overcoming racism and hard economic times in the Great Depression. He is an amazing person, and through his many accomplishments, he has become my hero.