by Adrian from Pleasant Hill 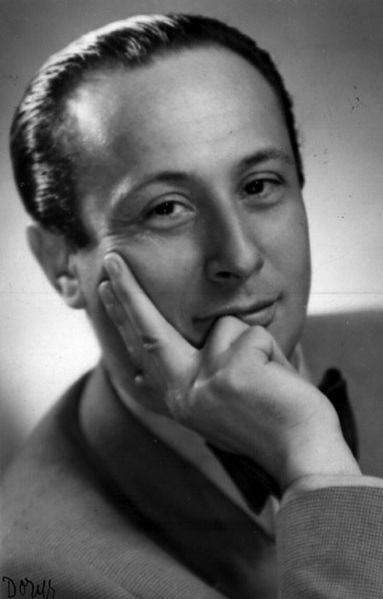 Wladyslaw Szpilmanhttp://www.znak.com.pl/graph/szpilman4.jpg [Public domain]Wladyslaw Szpilman was a Polish Jewish pianist, memoirist, and composer. He was born in Sosnowiec, Poland on December 5th, 1911. He began to study the piano at the Chopin School of Music in Warsaw during the June of 1931, and later at the Berlin Academy of Arts in Berlin, Germany. After Hitler and the Nazi Party seized power in 1933, Szpilman returned to Warsaw, Poland to live with his family, consisting of his mother, father, two sisters, and brother.

Being a Jew, Szpilman and his family were forced to witness the brutality and horrifying acts of discrimination against the Jewish people in Poland. Szpilman and his family were moved to the "Warsaw Ghetto" on October 31st, 1940. This ghetto inhabited almost all the Jews of Warsaw. A wall was created to stop the Jews from escaping, shattering the hopes of Szpilman to leave the Warsaw Ghetto quickly.

Life in the Ghetto was very difficult on the population. Thousands were dying of starvation, lack of shelter, crime, and the spread of disease. Szpilman held on to the will to live by thinking of his family and the piano. He got work at small cafes, which were filled with German troops who enjoyed his music. Over time, he met with other musicians and made a bit more money. Alas, for the period of him being in the Ghetto, Szpilman made barely enough money to support his family of six.

In 1942, the German military began a city-wide extermination of Jews. The Warsaw Ghetto wall was torn down, and hundreds of thousands of starving, weak Jews were escorted onto trains leading to extermination camps in the East. Wladyslaw and his family were soon in line to be on the trains heading to "Treblinka" a notorious extermination camp. Whilst being escorted, Szpilman alone was grabbed by a family friend, and told to flee back into the Ghetto and hide. Szpilman did so for his very life. Alas, the rest of his family did not survive the war. Szpilman never saw them again.

With the help of friends from Polish Radio, fellow musicians, and people who loved Szpilman's music, Wladyslaw survived in Warsaw. He worked as a laborer with some Polish workers, and often was attacked by German police. But nonetheless, Szpilman continued to carry on for the sake of his gift with playing the piano. Szpilman eventually gained a position which allowed him to exit the ghetto he hid in and assist the upcoming Polish resistance force. He smuggled food, weapons, ammunition, and information through the lines. More and more people rallied to the Polish resistance, and Szpilman remained hidden and protected from the German eye. During this time, Szpilman often became bored. He studied and taught himself English, composed new songs for the piano, and practiced his skills in cooking.

Death of a City:

In August of 1944, the Warsaw Uprising began, igniting a brutal street war between Polish rebels and the German occupants. Szpilman was not a combatant, and hid inside his apartment complex during the fighting. After the Polish resistance was defeated, the German military began to evacuate the remaining civilian population of Warsaw, and search for any supporters to the rebels. They eventually discovered Wladyslaw Szpilman, and he was forced to flee from his apartment with no food or water.

In November of 1944, virtually 20% of Warsaw was completely destroyed by the German attempts to catch the rebel supporters. What was left of the few civilians were moved elsewhere, and all that was left in the city were several thousand German soldiers and Wladyslaw Szpilman. He crept from building to building, hiding from the German occupants and searching for food and water. He often hid in the attic, most of which has secret compartments that he could sleep in without being detected. Over this period of time, Wladyslaw Szpilman suffered from malnutrition, and at many points almost died of starvation and lack of water.

Wladyslaw Szpilman was soon discovered by a German soldier, and over several days, he evaded German troops searching for him. They eventually gave up the chase, and Szpilman again went into hiding. He spent days inside attics, not searching for food or water in fear of being caught. Near the end of November, 1944, Wladyslaw Szpilman went out of his attic to look for food. He found a can of pickles in an abandoned kitchen, and noisily tried to open it. To his horror, he discovered a German officer looking directly at him. The officer asked what he was doing, and Szpilman replied he was trying to find food to eat. Wladyslaw then told him his occupation was a pianist. The German officer asked Szpilman to prove it, and to play a song on a baby grand piano that was in the other room. Szpilman did as he was asked, and flawlessly played Chopin's, "Nocturne in C sharp minor." Impressed, the German officer asked to look at Szpilman's hideout. Once he had seen the attic, the officer said he would return, and left without another word.

The next night, the German officer returned to Szpilman with bread and water. He did so every few days, also bringing news of the advance of the Soviet Army toward Warsaw. Szpilman's hopes began to rise, and he felt he was going to survive the war. With reassurance from the German officer, Szpilman stayed in his attic and awaited the Soviet's entrance to the city.

On December 15th, 1944, the German military hastily evacuated Warsaw, as the Soviet army was less than 5 miles from the city border. Before leaving, the German officer gave Szpilman two weeks worth of food and his German army fur coat. Szpilman, breath-taken and relieved, thanked the German for his help, and said that if he ever needed him, to ask for Wladyslaw Szpilman from Polish Radio. The German replied that Szpilman was a good name for a pianist. (In German, the name sounds like "a man who plays.")

Wladyslaw Szpilman survived the war. Shortly after, Szpilman was visited by a musician who said he met a German officer who asked for Wladyslaw Szpilman. The German officer's name was Wilm Hosenfeld, and was being held by Soviet troops as a spy. Despite Szpilman's attempts to free him from Soviet captivity, Wilm Hosenfeld passed away in a Prisoner of War camp in 1952.

After the end of World War II, Wladyslaw Szpilman wrote a memoir about his survival during The Holocaust, called "The Pianist", and returned to work for Polish Radio. His memoir and music performances were very popular in Poland, and he was regarded as a national hero. From 1945 to 1963, Szpilman composed over 500 songs, still influential and popular in Poland today. Until 1986, Szpilman performed all over the world, and was regarded the rightful title of a piano prodigy. He married, fathered two sons (who are still alive today) and lived a long, successful, and miraculous life until his death on July 6th, 2000.

Why He is My Hero:

Wladyslaw Szpilman is a hero to me because he endured so many hardships that human beings should not ever have to go through. Such pain, such suffering. Yet he always held on to the will to live, he pushed and endured. And best of all, he told his story. He told the entire world about one of the darkest times in history, yet not of his courage or his incredible strength. What he did is a noble thing, and asked no recognition for it. All he wanted to do was live a long and happy life, and to play the piano for all the world to listen to.

An Academy-Award winning film titled, "The Pianist," was made in 2002 and chronicles Wladyslaw Szpilman's survival during the Holocaust. Wladyslaw's son, Andreszj composed music and helped produce the film.

Hello, my name is Adrian. I am fourteen years old, love to write stories, and I want to be a filmmaker. I truly admire Wladyslaw Szpilman and his struggle to survive during the Holocaust, and I hope you admire him too.