Not long ago, I was excited to learn that scientists have discovered "mirror neurons" in our brains. When we watch someone else do something, these neurons fire, just as if we ourselves were doing what the other person is doing. Imagine that! What we observe, we experience. This means that who it is we pay attention to matters. It really matters, for we become them. 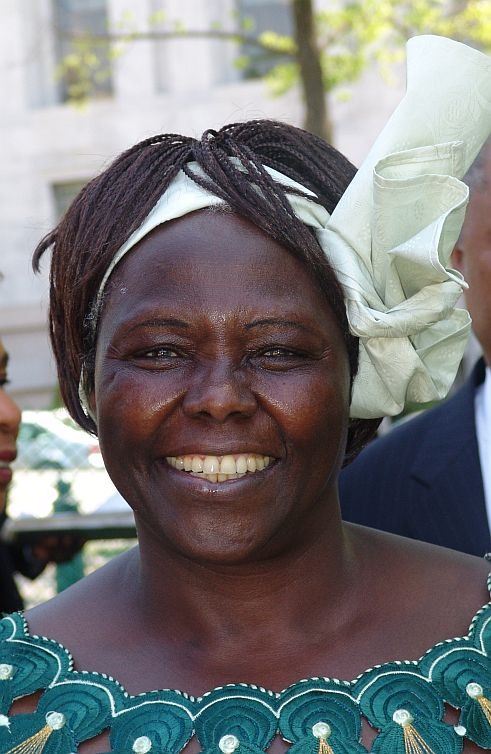 Wangari MaathaiKingkongphoto; www.celebrity-photos.com from Laurel Maryland, USA / CC BY-SA (https://creativecommons.org/licenses/by-sa/2.0)In the early 1970s Wangari—the first woman with a doctorate in biological sciences in East Africa—watched the Sahara desert creep south. In just one century, Kenya's forests had shrunk to less than 5 percent of what they once were. Wangari knew that her country's entire ecology was threatened, with devastating results: villagers, mainly women, had to walk farther and farther to get water and firewood. So Wangari decided to act. On Earth Day 1977, she planted seven trees, and with that act, launched the Green Belt Movement, a village tree-planting movement whose impact has gone far beyond trees.

When she began, the Kenyan forestry service, established under the British, laughed at her. “What? Untrained village woman planting trees to reverse the encroaching desert? Oh no, that takes trained foresters!” But Wangari didn’t listen.

"The foresters were not amused," Wangari told us. “They said I was adulterating the profession. I told them, 'We need millions of trees and you foresters are too few, you'll never produce enough of them. So you need to make everyone foresters.' I call the women of the Green Belt Movement foresters without diplomas."

Now that the world has discovered my hero, many laud her unwavering resolve, stunning accomplishments, and her infectious warmth. Wangari, the environmentalist, they call her; Wangari, the human rights and women's rights and pro-democracy activist. All are accurate. But Wangari is my hero because she understands that the true battle is not about rights, as such, or even the environment, as such. She understands that the real battle takes place inside, when ordinary people make that internal shift--as terrifying as it might be -- to realize the power that is ours.

"We broke the code," Wangari told me and my daughter Anna when we talked with her in Kenya in 2000. "We told the women: 'Use the methods you know, and if you don't know, invent.' They would use broken pots. They would put the soil and seeds there and watch as they germinate. If they germinate, well and good; if not, try again."

In other words, she told the women to trust themselves.

As the result of her work, tens of thousands of village women who have been taught to defer to chiefs, husbands, colonial authorities, multinational corporate marketers, and to disparage their own traditions and common sense are now gaining the courage to step into the light. They are saying: We have the solutions. We can take responsibility. We can transform our villages and our nation--and our world.

Wangari told us a story one night in Nairobi that perfectly illuminates this shift in perspective. “I grew up in the Rift Valley,” Wangari told us, “and on either side of the valley, there were ridges. I believed that the ridges—where the sky or, quite often, the clouds would reach the mountains—were where the world ended. I believed that what I could see was the whole world. "Then one day we set out on a journey, the longest of my life. For the first time I came to the top of the ridge, and I discovered there was something beyond. I was so happy to know that the whole world was not in that valley, that there was another world. "That little journey reminds me of the many, many journeys I have made since. Before you go, you think that the world is just here, and then you go to the ridge and you see there is another world. There are so many ridges in life, and if you are willing to go to the top, you will see another world beyond. But if you don't go—if you don’t take the risk--if you only stay where you’re safe, then of course you never see past the ridge."

Saying good-bye to Wangari in Kenya five years ago, my heart ached because her movement’s funding looked shaky. It ached even more when I got home and learned that she'd been jailed again for her resistance to illegal logging. Friends call me an optimist, but even I would never have imagined, let alone predicted, the changes that just a few years would bring. In 2002, Wangari swept into Parliament, out-polling her nearest opponent 50 to 1. Soon, she was named Deputy Minister of the Environment, and women danced in the streets of Nairobi for joy.

Green Belt Movement women wear a simple white T-shirt adorned with a simple slogan: "As for me, I’ve made a choice." Every time I see it, it stirs my heart. This is what Wangari has taught me: To create the world we want, we must choose to act, even when there is no evidence assuring success -- even when we face ridicule and loss for our acts.

I used to joke that hope was only for wimps, those folks without the stomach to face up to how bad things really are. Wangari has taught me the opposite. Hope is reserved for the strong at heart. For hope is not what we find in evidence, I now see. It is what we earn only if we listen to our deepest knowing, and make the choice to act.

Copyright 2005 by The My Hero Project

MY HERO thanks Frances Moore Lappe for contributing this essay to My Hero: Extraordinary People on the Heroes Who Inspire Them.