My hero is the Japanese artist and peacemaker Yuri Mason. Yuri Mason was born Yuriko Uchida on September 16, 1920 in Tokyo, Japan. She began painting at the age of seven and continued virtually non-stop until her death 80 years later. She studied art and married a Japanese man at age 20. As the mother of two young children, she lived through the years of war, surviving the fire bombing of Tokyo and witnessing the destruction of her country’s cities of Nagasaki and Hiroshima by atomic bombs. These experiences profoundly affected her life as well as the nature of her art. In 1947 she divorced her husband, an act unheard of for a Japanese woman at that time. Under the circumstances of her divorce she was forced to leave her son Mitsushige Wada, to be raised by her ex-husband’s family and her daughter Reiko Wada, to be raised by her own parents. In 1954 she met an American serviceman, Russell Mason, married him and moved to the United States to pursue her passion as an artist. There she began her formal education in Fine Arts, first attending the Boston Museum of Fine Arts School, then the San Francisco Art Institute and finally the Graduate Arts program at Stanford University. She settled in the nearby town of Portola Valley, California, where she lived until her death on July 2, 2008. 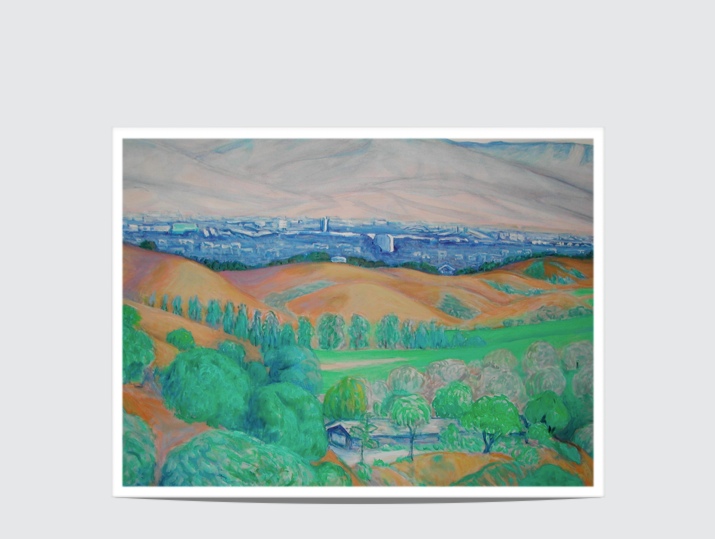 When I first met Yuri, she was in her mid forties, a full-fledged artist in the Bay Area Figurative Art movement, exhibiting her artworks up and down the Peninsula and in San Francisco and winning prizes along the way. I had the great fortune when I was in the fifth grade, of moving into the house next door to hers in Portola Valley. She was the tiniest and most delicate, as well as the most beautiful woman I had ever met. She spoke quietly, though frequently erupted in barely audible peals of laughter. I liked her immediately and didn’t notice she was more than three decades older than I was. I soon looked forward to visiting her each day after school when she would welcome me as if I were the most distinguished guest ever to arrive. Every day Yuri made me tea and seaweed treats and some days she painted or sketched me in her studio while we sat and talked.

People strive all their lives to be truly alive and present in the moment, to listen and speak to one another with their hearts, free from the conditioning of their minds. Yuri was my first encounter with a person who seemed to have such an extraordinary presence about her. She communicated aliveness, freedom and a sense of spontaneity and joy that emerges from greeting every moment as it comes. She taught me love of stillness and of peace, reverence for life, respect for all creatures and a deep appreciation for the language of art which she spoke so well. Through the books in her living room she introduced me to Pierre Bonnard, Edvard Munch, Henri Matisse and many others of whom she spoke as if they were personal friends. Together we shopped at the market, where Yuri carefully selected the best fruit to arrange in her handmade plates. A bag of groceries provided the material for the most exquisite still life paintings: five persimmons sleeping beneath their leaves in a bowl, two green apples on a black plate, a single pomegranate against an aquamarine background; a slice of tomato beside a knife. 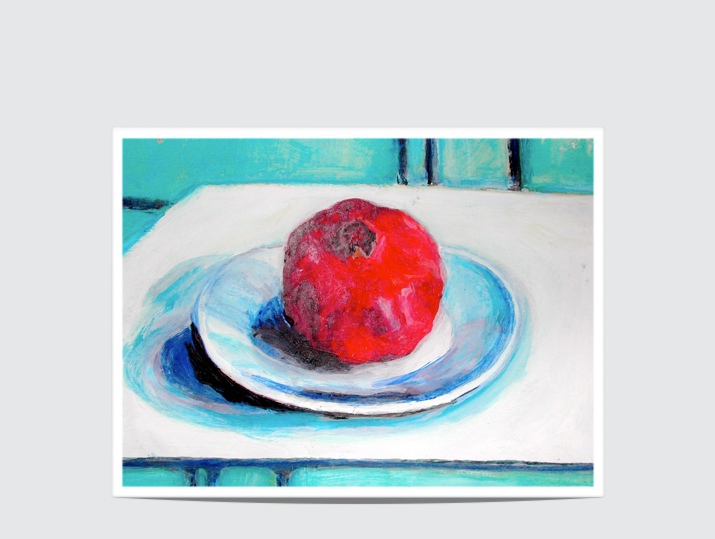 Yuri played me her favorite Rachmaninoff concertos, pieces by Mahler and Mozart and Puccini operas. But most of all, I was awed each time I visited her, by the power of her own art, which hung on every wall and filled every closet. Even as a child I could appreciate that Yuri’s art transmitted her mysterious and wonderful state of being. She once wrote to a friend “Art allows me to bare my soul…” Indeed her canvases seem to cry out with such feelings as terror, anxiety, dread, love, calmness, peace, anger, compassion and emptiness. In a statement of her artistic intent, she claimed that “the basic aim of all real art is, after all, to intensify people’s feelings about the meaning of life.” Yuri’s work evokes distinct emotions and invites you to share in them. Her still life paintings (whether of fruit, eggs, a shaving kit, a slice of cake, a Mexican pitcher filled with flowers, a water glass on a table in front of a window, or a pack of cigarettes and matches next to a mug) evoke pure stillness and the comfort of everydayness. Her "War and Atomic Series”, on the other hand, which includes such pieces as an 8 foot tall acrylic rainbow-colored mushroom cloud, a shocking pink gouache cloud raining pink fallout into the dark ocean below, and an atomic chamber of violet pinks and blues where atoms are being split, shows off an eerie sense of destiny, beauty and power.

Other paintings in her “Peace Series” call up pure terror and issue a cry for world peace louder than any words: a skeleton-man wearing a gas mask; a mother and child crouching below an ominous sky of cartoonishly evil B-52 bombers, a triptych entitled “Dreams” in which a crowd of monstrous faces look up to the sky in horror. 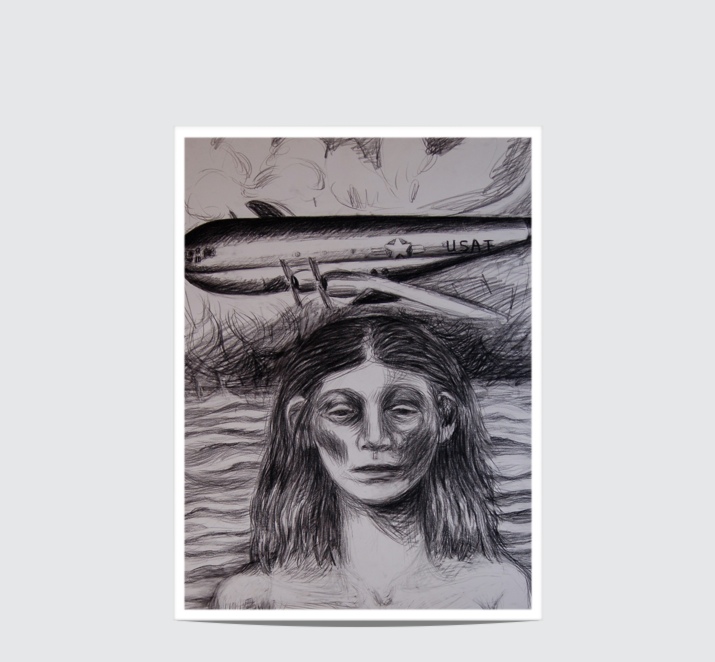 An advocate for complete nuclear disarmament, Yuri wrote: “These images come out of war. They have gone through the metamorphosis and transformed into visual images, which are connected to today’s fear, anxiety, misery, and horror of devastating agony for not only instant death, but worse yet, radioactive fallout. This awful invisible monster.” Though these images were clearly rooted in her own experience of war, it is a reflection of her prophetic vision that they take on a new, uncanny relevance in the era of nuclear power accidents, with their new forms of silent, invisible monsters.

Yuri’s power of concentration seemed limitless. She painted for hours every day, coming upstairs from her studio only for tea, a bit of nourishment and a visit with her husband who wrote psychology books from his upstairs study. She painted everyone and everything that moved her: landscapes, faces, forms, bodies, abstractions, funerals in which the dead ascend to heaven while the living throw bouquets of flowers into the sky, lovers embracing on a blanket on the earth as viewed from outer space, nude angels playing in the light of a full moon, dogs dressed in handsome fur coats, a family of quail camouflaged in the irises outside her bedroom window. She celebrated her studio and the patisserie shops in Paris in a series of lively and vibrant paintings. No subject, nor any medium was off-limits.

As administrator of her estate, it fell to me to sort through her belongings in her home in Portola Valley after she died. I found stacks of landscape drawings and sketches on hotel stationery with notations of the room and hotel window where she sketched. I found child-like depictions of surfers riding waves painted on the back of cereal boxes, finger paintings on white cardboard of nude women in yoga poses, a box of whimsical still life paintings on masonite squares.

Yuri was in a constant state of witnessing life, a passionate observer. She observed the world as a play of opposites: negative/positive, light and dark, war and peace, beauty and horror, fear and love. Yet her art transcended these polarities. And to a person who had turned so deeply within herself, nothing in the world seemed to disturb her state of perfect equanimity. She brought this high state into her art. One cannot look at a single piece of her art without feeling Yuri’s immense love of life. As we experience the emotions transmitted by Yuri’s artwork, we reach an understanding of our sameness, our common atavistic bond and thus we hear her transcendent message of peace. 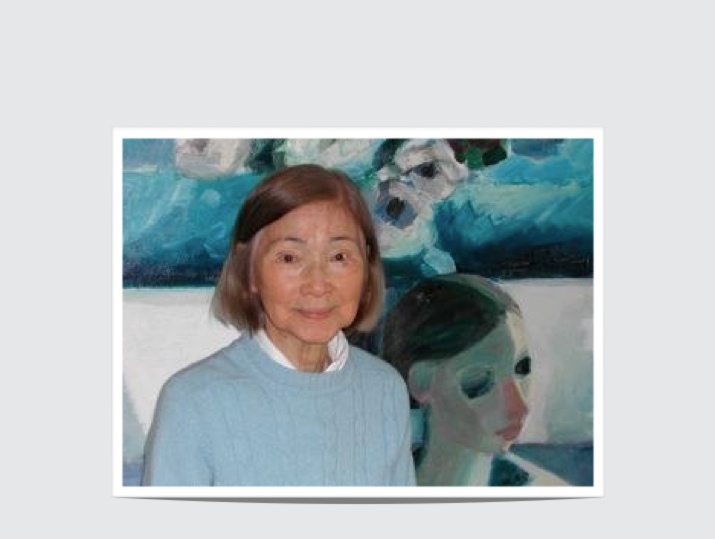 I moved away from home and from Yuri when I was 16, but she remained a cherished friend and mentor, writing and calling me often and encouraging me through the successes and failures of my own life, teaching me her unique and visionary way of seeing the world encoded in the legacy of art she left behind. It became clear to me after Yuri’s death that one of the purposes of my own life was to share with others the message of this legacy.