by Allison H from San Diego, California in United States

“It taught them about bravery. Sometimes they would tell me about how it got them through times of abuse. And this stuff actually is big and important. To give people tools. Mindtools that they can use to deal with real problems” (Gaiman). In an interview regarding his past accomplishments and works, fiction writer and philanthropist, Neil Gaiman, elaborates on how his fictional characters serve as an inspiration and guide to many people. However, this applies to any hero. Any hero, whether fictional or human, stays within reach of their audience to give guidance, inspiration, and to share their “tools”, which are heroic qualities. In differentiating the quintessential hero from the ordinary human, it ultimately depends on how one can use these tools to make an impact. A meritorious subject of the hero title uses their character traits and talents for the ultimate progression of civilization.

Maya Lin at the Museum of Glasshttps://commons.wikimedia.org/wiki/File:Maya_Lin_1.JPGAs a revolutionary artist, Maya Lin exemplifies using one’s tools and talents for the betterment of society. Maya Ying Lin, a self-proclaimed mixture between a sculptor and architect, and daughter of Chinese political immigrants, was born on October 5th, 1959 in Athens, Ohio. Through her adolescent and teenage years in Athens, Lin moved on to graduate at the top of her high school class, and eventually, graduated cum laude from Yale University with degrees in architecture and sculpture in 1981. She also headed prestigious projects like the Vietnam Veterans Memorial in Washington D.C. while still a student. As a young, bright protégé, Lin knew success and criticism earlier than most other young artists. Despite the criticism, Lin still creates revolutionary pieces that push the boundaries of modern art to this day. All creators and heroes must possess a mature attitude and a respectful mindset. They must be able to face their problems with the utmost poignancy, without deferring to any petty actions. They show reverence towards their audience, renounce imposing their opinions on others, and utilize their traits to impact the world around them. From her countless projects, iconic pieces of art, and her struggles in the workplace, one can see Maya Lin’s incredible thoughtfulness and consideration, and just as importantly, the refined and collected way she responds to her adversaries, which elucidates why she epitomizes an indispensable hero and inspiration.

Original, powerful and minimal design of the Vietnam Veterans Memorial (VVM)https://en.wikipedia.org/wiki/Maya_LinCivilization should consider Lin an outstanding hero because of her mature manner while handling her opposition. Being a young looking female in a male-dominated industry in the 1980s, her co-workers did not trust her design of the Vietnam Veterans Memorial. Lin (qtd. in Langmead) counters those who challenged her design: “‘The judges chose it. If you want to change something, reconvene the jury,’ and she later acknowledged that she was ‘very tough (and) very stubborn when I had to be… I wouldn’t yell’” (202-203). Lin responded to her critics and their accusations with calm and simple phrases, without losing her temper, which shows her masterful control over her emotions. To have that astonishing amount of self-control in infuriating circumstances highlights Lin’s eloquent and mature heroism. Placid and calm heroes will help society have constructive conversations and learn from one another, which humankind needs to reach unity and solve problems. If heroes who face their obstacles and enemies with a mature attitude are never acknowledged, mankind will never be able to find their way out of the maze of trials and tribulations and walk out into a less problematic world. For this reason, civilization must take inspiration from calm heroes like Lin. Similarly, despite having the ultimate and most powerful voice in the construction of the memorial, Lin's coworkers shrugged her off when she brought up her concerns. In an interview with Brian Lamb, Lin says: “They didn’t talk to me, they just made the model and they had pushed the design way to the back. And I said at one point, You know, that model isn’t accurate. You really want to split the difference between for--No, no, no, it’s just a press conference model. Don’t--don’t worry about it. Her response: ‘It is such a simple piece, everything matters’” (Lin 24:20-44). Instead of losing her temper and firing back at her coworkers, Lin countered their statements respectfully and simply. Lin’s maturity and heroism is seen when she contains herself even during infuriating situations. Dignified heroes like Lin don’t lash back at others, but move away from a situation in a calm and stately manner without inducing more conflict. Maintaining tranquility will allow humankind to share ideas and solutions to move past obstacles, and in turn, find the thread needed to stitch the fabrics of society back together. One must learn from mature, dignified heroes like Lin to mend the wounds of civilization. Only true heroes have the astounding maturity to stray from the easy path of frustration and agitation and walk on the difficult path of composure to ultimately close the rifts and cracks in society in order to reach a better world, which gives a reason as to why humanity needs to look up to heroes like Lin for inspiration. 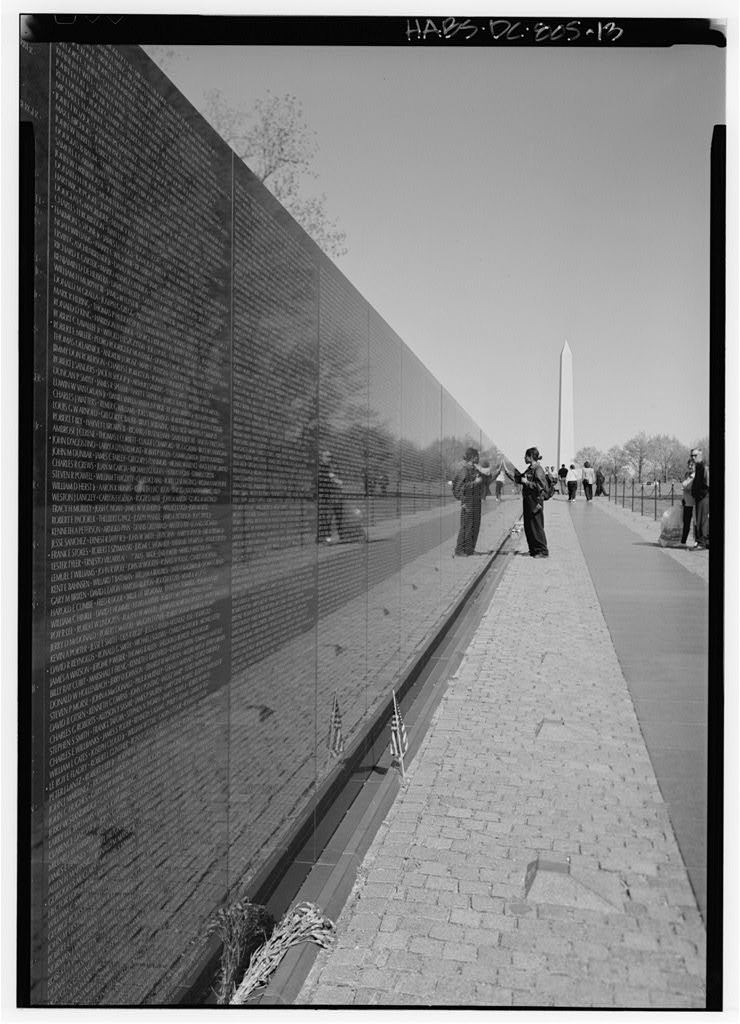 Vietnam Veterans Memorial, Washington D.C.https://commons.wikimedia.org/wiki/File:Vietnam_War_Memorial_Washington_DC_Maya_Lin.jpgIn addition to demonstrating her calm and mature composure, Lin illustrates that she can serve as a worthy inspiration and hero because she refrains from forcing opinions on her audience with her art, and rather gives them room for intimate contemplation. In an interview with Goldman Sachs, Lin questions the purpose of her artwork and what she can do to impact the world without forcing opinions on her audience: “And so for me, if there was one thing I could do as an artist, as a memorialist, could I help a little with where we are right now, with climate change, with habitat loss, what could I do to contribute? In that sense, any of my works actively engages you, to almost experience something, and then come up with your own conclusions” (Lin 1:33-2:41). Her artwork does not serve as a lesson with a purpose, but rather, serves the audience with a quiet space of reflection to gather their thoughts, rather than being forceful and brash, showing her awareness and attentiveness. Conscientious, thoughtful heroes like Lin have the mindfulness to give room for contemplative thought in the beholder but refrain from using art to force their ideas on others. If civilization took inspiration from these heroes, and abstained from pressuring others, society would be on the path to a more progressive and accepting world because of the new ability to peacefully contemplate. Moreover, to spark moments of contemplative thought for the visitors of the Vietnam Veterans Memorial, Lin refrains from using her art in a didactic fashion, which shows true respect for her audience, while also still showing her desire to impact the world for the better. In a video produced by the NEA, veterans discuss Lin’s impactful, yet quiet art: “You go there and you walk through there, and there it is: all those names. I guess in its simplicity, I guess that it’s just the way it was designed, it’s natural, it’s earth. And the names on the wall, they aren’t in any particular order, just the way they fell” (Minthorn 1:37-2:01). From the simple, and apolitical way Lin crafts her memorials, her audience receives time to reflect quietly on their own ideas, and leave with new, and more constructive ideas to revamp humankind. Lin’s genius and apolitical techniques demonstrate her esteem for her audience, her goodwill, and heroism. A true hero provides intimate spaces for the beholder to reflect on societal ideas and form their own standards, which will in turn progress society at a quicker rate. We need a true hero to inspire us to construct the steps of the stairs to a better world, which Lin does with her quiet yet inspiring pieces. Her ability to evoke thought in the mind of millions of people while refraining from didactic art and progressing the world proves Lin a culminating hero. 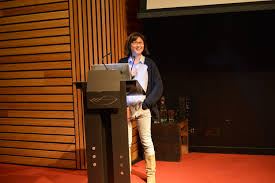 Maya Lin gives an art, technology, and cultural (ATC) lecture at UC Berkeleyhttps://commons.wikimedia.org/wiki/File:Maya_Lin_(15216032380).jpgMaya Lin, revolutionary artist and creator serves as an inspiration to society because of her sovereign sophistication, and her high regard for her audience. Lin clearly possesses these traits, but more significance lies in how she spreads these tools to inspire others around her. Her mature disposition and care for her audience allows her to achieve beyond the scope of normal citizens and enables her to shine as a hero and artist. Lin states: “We are there as artists to question and to push buttons and to propose ways of thinking that are fresh and new, and in so doing, they might become controversial and that’s a good thing” (Lin 4:16-31). Lin innovatively and refreshingly sparks the fundamental ideas needed to build a better society and bridges the gaps between people by masterfully utilizing the power of articulation and self-control in a way never seen before. Her shamelessness in using her talents should inspire us to have that same boldness. If we unabashedly express our ideas, we will be able to reach a world of acceptance and compassion sooner. In my elementary years, I always dreamed of becoming an architect, but judgmental relatives, peers, and people around me insisted that architecture remained a hopeless career and that I should become a computer scientist instead. But however, as soon as I read about Lin’s story of overcoming and growth, I felt inspired. Maya Lin showed me that design and architecture don’t solely pertain to technicalities and calculations, but how they also pertain to emotions and inspire their beholder to create change. And I, the beholder, realized the hidden power of design and reflected on my thoughts. No longer would I follow a path not meant for me, but I would relentlessly pursue my passion, and express my ideas with no shame, just like Lin. Maya Lin’s tools have the capability to inspire and impact the world in a new and unique way. If we could take inspiration from Lin, we could share and use her tools of character to transform society into a more accepting and welcoming place. We could use these tools to have the intrepidity, to have the fearlessness, and to have the power to progress.