by Monitor's Editorial Board from United States

For the first time, the profession’s biggest prize goes to an African, someone whose village origins help define new ideas in building design. 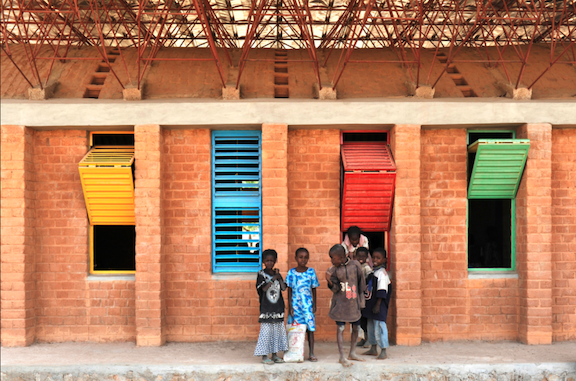 As in many professions, architects are hunting for new ways of thinking to help solve the climate crisis. Material solutions in building design, such as recycled steel or reflective paint, are fine but finite in their influence. Their efforts received a boost this week after the annual Pritzker Prize, otherwise known as the Nobel Prize for architecture, was awarded to someone who brings “brilliant, inspiring and game-changing ways” toward sustainability in structures.

He is Francis Kéré, the first African to win the prize and whose origin from a small village in the heart of the Sahel in Burkina Faso accounts for his refreshing approach in a profession still famous for grand cultural icons than for environmental leadership.

“He knows, from within, that architecture is not about the object but the objective; not the product, but the process,” reads the Pritzker jury’s citation.

His early fame came in helping design a school in his village after an education in Germany. He let the whole village participate in the design, drawn on sand for all to see. Then he enlisted them to construct the Gando Primary School, using local wood to compact the stone floors and local clay to make bricks mixed with cement. The people learned skills that they could later use to find work, showing that good architecture can transmit ideas widely.

The result was a welcoming structure with a “floating” roof that allows passive ventilation in a hot climate and wall openings that bring filtered light for students to learn even without electricity. The school’s design is also a work of art built on vernacular motifs. “Everyone has the right to beauty; it should be a human right!” Mr. Kéré told Radio France Internationale.

Mr. Kéré showed the villagers that ideas to deal with climate or other challenges are always at hand. “It is not because you are poor that you should not try to create quality,” he said in a statement after receiving the prize.

By starting his profession in one of the world’s poorest places, he challenged the notion that climate solutions start with big institutions. “We cannot say that we do not have a voice; everyone can contribute to tackling the major issues of our time,” he told Dutch magazine De Groene Amsterdammer. “By acting locally, you can generate a global impact. For example, you can choose to build a school building with clay and inspire people all over the world, instead of waiting for the government.”

The Pritzker jury found his body of work, which now extends with designs from Africa to China, is rooted in the “unique” aspects of each community. His buildings “have presence without pretense and an impact shaped by grace,” it stated. For his profession, those types of qualities can be a guide in responding better to the world’s biggest challenges.