A new stone soup: Idle restaurants fire up to feed the hungry

Sometimes a concept clicks, and with lots of help you can address multiple problems. This new nonprofit combines funders, food businesses, and volunteers to ease food insecurity and keep some workers on the job.

MAY 29, 2020 - PORTLAND, MAINE - In the early days of the coronavirus pandemic, Ellie Linen Low woke up one morning feeling extremely fortunate. She and her family in Falmouth, Maine, were cozily hunkered down at home, in good health, refrigerator fully stocked. 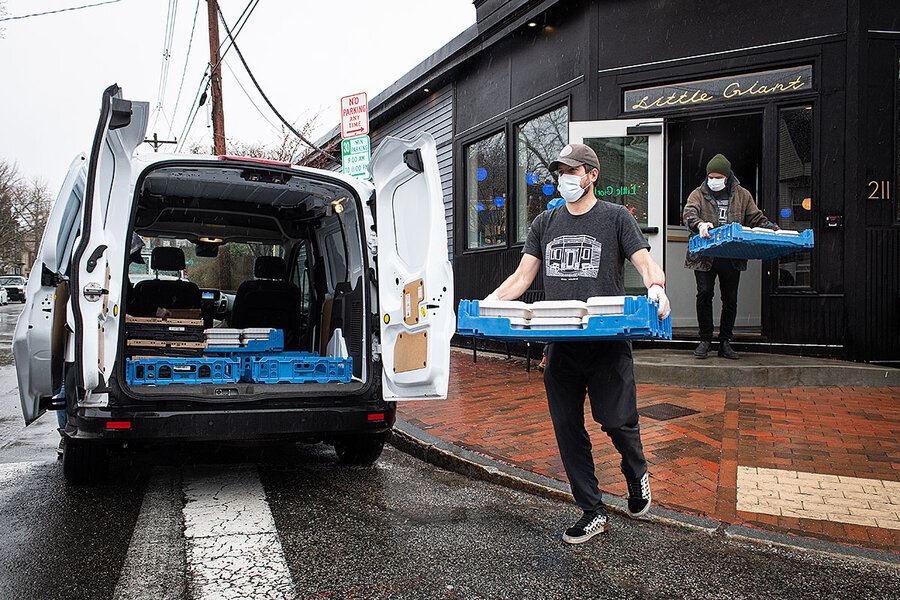 At the same time, the mother of three felt keenly aware of the hardship around her. The state had just shut down. Friends, particularly those in the restaurant industry, had suddenly lost their jobs.

But Ms. Linen Low is used to thinking big. Her background is in launching nonprofits, and she says she has always been passionate about “connecting really smart people with great ideas, and then bringing everyone together to see what magic can happen.”

So she did just that. In late March, she hatched a plan with far-reaching benefits: Raise funds to pay restaurants to cook meals with ingredients from Maine farms to feed hungry people.

By mid-April, small masked-and-gloved crews at two Portland restaurants had fired up their stoves to make meals – about 450 that first week – for vulnerable populations.

Since then, seven more restaurants in this vibrant coastal city – named 2018 “Restaurant City of the Year” by Bon Appétit magazine – have joined the effort. Partnerships with social agencies have been forged, volunteers have stepped up, and donations have poured in – enabling the initiative to nearly double its production of fresh, packaged comfort food each week.

Chef Damian Sansonetti, of Chaval restaurant in Portland, Maine, started making meals in mid-April to be delivered to food insecure people. Conceived in March, the nonprofit Cooking for Community raises money to pay restaurants for their work and buy local ingredients when possible.Winky Lewis/Courtesy of Cooking for Community

Today, Cooking for Community (C4C) provides just over 2,000 meals a week. In its first two months, the grassroots initiative raised about $220,000 from individuals, foundations, and corporations. It is buying crops from farmers, seafood from fishers, and keeping many of Greater Portland’s kitchen crews employed while cooking for hungry people.

While the global health crisis is affecting food pantries, soup kitchens, and shelters – which are often short-staffed, overcrowded, or closed – C4C has sought to meet an urgent need. The organization is distinguishing itself by attempting to reach anyone who’s hungry – people who are unemployed, homeless people, older adults, or immigrants experiencing food insecurity.

Ian Malin, an owner of Little Giant restaurant and now volunteer operations coordinator for C4C, says it just made sense for him to join the effort. “I thought, if I’m this scared in my own home with no worries about my next meal, what must it be like for people on the streets who are isolated and unable to access normal food channels?” he says.

Mr. Malin realized he had everything he needed to get started – a commercial kitchen, a staff that wanted to work, and time on his hands since he wasn’t busy with regular customers.

The meals are thoughtfully prepared to be tasty at any temperature, easy to reheat if possible, and nutritious, says Mr. Malin. Restaurants are paid $5 per meal and reimbursed for food and labor. During the first week, cooks made fried chicken served with German potato salad and grapes. Recently, the crew at Gather restaurant in Yarmouth created large batches of beef stew for residents at the YMCA. 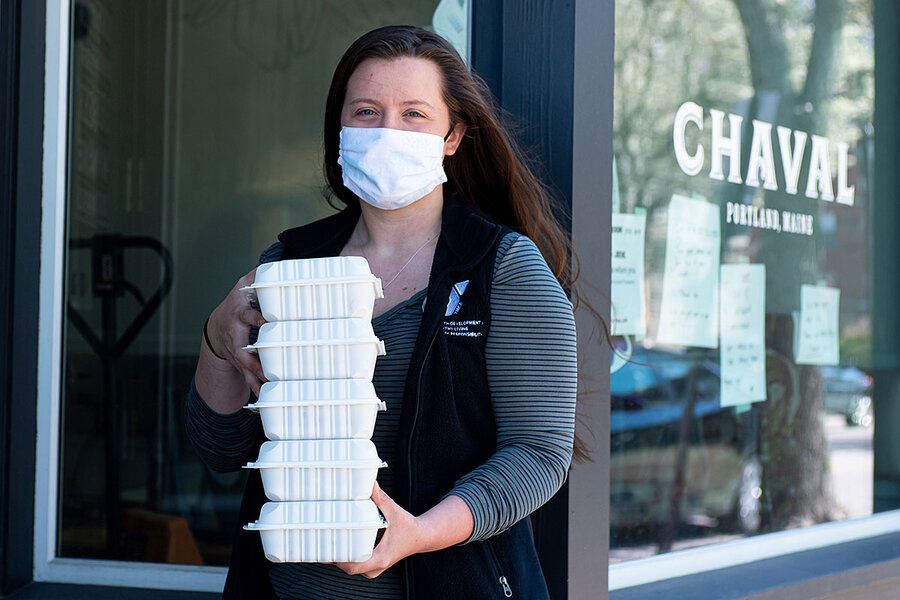 Victoria Kelley picks up meals at Chaval restaurant, one of the first small businesses to make meals for Cooking for Community (C4C). Ms. Kelley works for the Pineland Branch YMCA in southern Maine, a social service agency partner of C4C.Winky Lewis/Courtesy of Cooking for Community

Cooks might also tweak meals to suit the people they are serving. For Muslims observing Ramadan, Mr. Malin commissioned halal meals from Istanbul Restaurant and Bakery, an immigrant-owned restaurant in Westbrook. They “knew just what to make,” Mr. Malin says. “The food smelled so good, and it was exciting to help make that happen.”

Sometimes the meal deliveries provide an entree to other meaningful interactions. Ashish Shrestha, a C4C volunteer and a peer outreach worker for social service agency Amistad, has seen the struggles of those living on the streets.

“Hunger is almost normalized now,” says Mr. Shrestha. “The other day I delivered a food box, and the person said, ‘Gosh, I’m so glad to have this. I thought I would go hungry tonight.’”

“I know most of these people really well,” he adds. “So I’m not just handing over a meal. I’m also checking in with them.” He’s been delivering about 150 C4C-made meals per week to people who are homeless. Mr. Shrestha might suggest resources for medical help, substance-abuse recovery, or maybe just fetch them a mask or gloves from his car.

But most of all, he says, “it’s not about fixing things. It’s about sitting with people, listening to them, and helping them feel less isolated.”

Mr. Shrestha and others involved with C4C envision their work continuing beyond the COVID-19 crisis, and their frequent Zoom meetings often focus not only on the day-to-day but also on the future.

“[C4C’s] work is about so much more than surviving a shock,” says 20-something volunteer Emily Sun. She and her mother were both looking for a way to make a difference. “We’re creating a model that could go far. It has infinite potential.”

Also supporting the work are the social service agencies that identify the families and individuals needing assistance. One of Ms. Linen Low’s first calls in late March was to Leslie Oster, director of the Blaine House, the governor’s residence. With her experience in catering and working in hunger relief, Ms. Oster quickly signed up the first group of nonprofit partners.

“Cooking for Community is a wonderful example of the ingenuity we need right now,” says Phil Walsh, executive director of Maine Initiatives and a member of the C4C advisory board. “It is also building the relationships and the structures needed to navigate whatever comes next.”

Another member of the board is Barton Seaver, a chef and one of the world’s leading authorities on seafood. He is also a proud Mainer, the father of a 3-year-old son, and someone who cares deeply about local food systems and access to them.

“One of the things that excited me right off the bat about this organization,” he says, “is that it is showcasing the best of Maine – the place, the products, the people, including our quick-on-their-feet and utterly capable chefs, and it’s uplifting every fork in the chain.”

Mr. Seaver was mentored years ago by José Andrés, founder of World Central Kitchen, known for its international work feeding people in desperate need. “The greatest lesson I learned from José,” recalls Mr. Seaver, “is that the role of a chef could extend far beyond the kitchen and that chefs are, in fact, almost akin to anthropologists, in that food offers a window into so much of the human experience and condition.”

This lesson, Mr. Seaver adds, was learned when cooking alongside Mr. Andrés in the “halcyon days when José was finding his voice and path outside of the kitchen.” It’s one that has stuck with him, and he sees the efforts of Cooking for Community as exemplifying this expansive role of chefs while also building community and showing profound empathy for others.

“It’s a beautiful way for Maine to face the nation,” he says.

“What we’re doing is unique and timely and tangible and can serve as a model,” says Ms. Linen Low. “It has already been of interest to people in other places.”

To learn more about “Cooking for Community,” visit www.cookingforcommunity.org.

Share your hero stories on the MY HERO Guestbook