A tabby by any other name: In Hawaii, a debate over what’s wild

What does it mean to be wild? In Hawaii, blurred boundaries between pets and wildlife have been a source of tension, even as residents find common ground in preserving the islands’ unique ecosystem.

AUGUST 14, 2019 - HONOLULU - It’s just after 7 p.m. and the mists hovering over Kuliʻouʻou Ridge have taken on an eerie bluish gray in the twilight. The Hawaii Kai Park and Ride is empty, of cars anyway. Commuters have picked up their cars and the family selling lychees and pickled mangoes from the back of their hatchback has gone home. But the lot’s evening residents have begun to arrive. 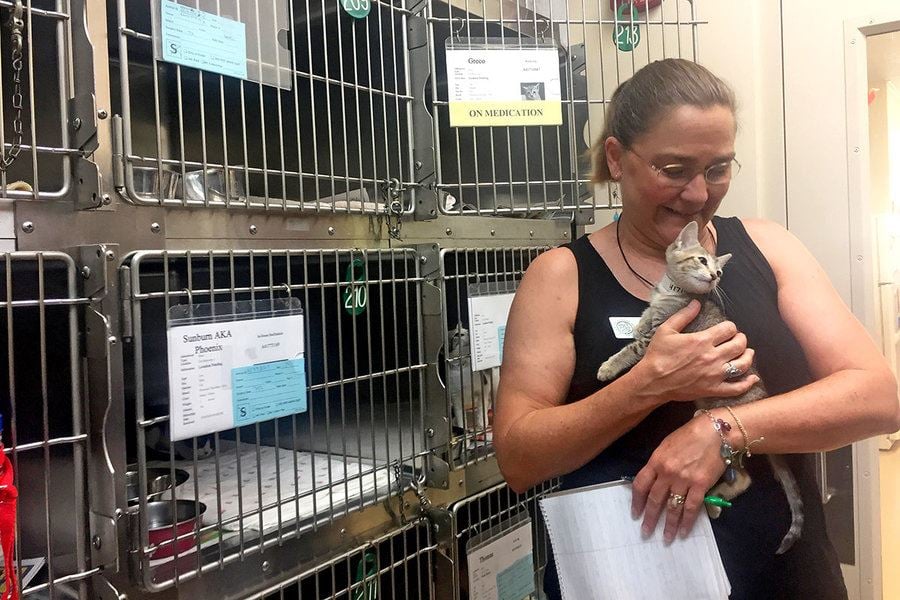 Public policy advocate Stephanie Kendrick nuzzles Greco, a stray kitten in a recovery room at the Hawaiian Humane Society in Honolulu, July 3, 2019. The island’s stray cats, which can pose problems for other wildlife, have divided animal lovers.Noelle Swan/The Christian Science MonitorScattered throughout the parking lot, one ... two ... three dozen cats lope and lounge across parking spaces, curbs, and strips of grass. A pair of black and white tuxedo cats keep careful watch from atop a stone wall, while tabbies, bobtails, and grey Chartreux claim swaths of pavement.

These are the cats of Hawaii Kai, a residential area in Honolulu. No one knows exactly how many unclaimed cats roam the island of Oahu. Everyone seems to agree that the most commonly used figure of 300,000 is likely an underestimate. What’s harder to agree on is how to refer to these cats. Whether they are wild, free roaming, or feral is a matter of perspective.

“We don’t use feral,” says Stephanie Kendrick, public policy advocate for the Hawaiian Humane Society in Honolulu. “A subset of these animals were born outside of homes and they are generally not handleable. But a lot of them, the vast majority of them, are abandoned pets.”

The typical categories of pets and wildlife don’t seem to hold much sway here. Part of the islands’ allure is the chance to see exotic marine life up close, in their natural habitat. Biodiversity has become a kind of currency and industries have sprung up around snorkeling with sea turtles and swimming with dolphins. At the same time, residents have grown accustomed to living alongside a menagerie of farm animals gone wild.

This blurring of boundaries among people, pets, and wildlife has been a source of tension, even among animal lovers. 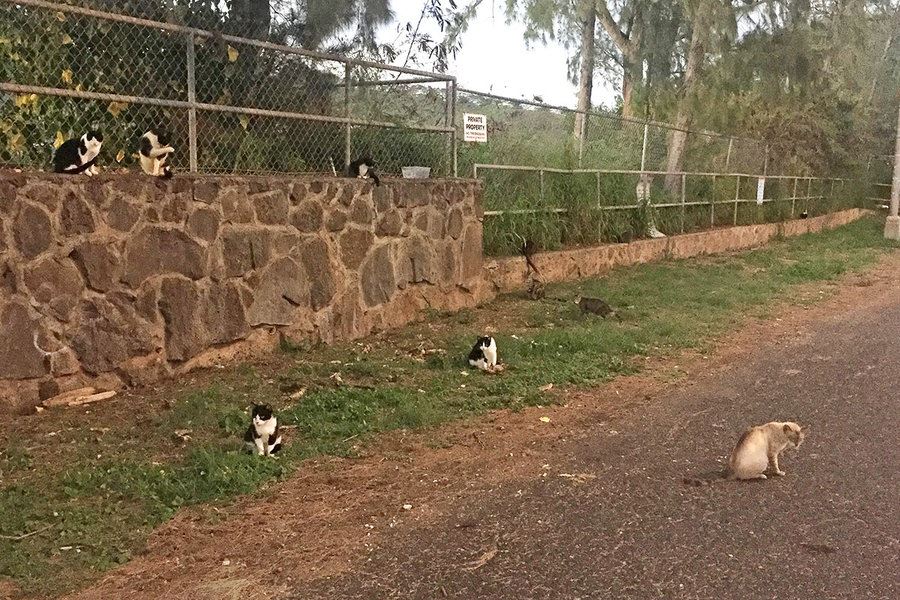 Wild cats gather at the Hawaii Kai Park & Ride in Honolulu, July 3, 2019. Dozens of cats visit this parking lot each night. Some have been abandoned, others were born in the wild.Noelle Swan/The Christian Science MonitorThe cats are a particular point of contention. Many residents adore them, and have even adopted entire colonies. (The colony in Hawaii Kai has been managed by volunteers for many years.) But the cats pose problems for other wildlife, including several endangered species of birds.

“The tricky thing about Hawaii is that it is such a unique ecosystem,” says Joshua Atwood, invasive species coordinator for the Department of Land and Natural Resources. “Species that evolved here evolved without land predators. So a ground nesting bird has almost no defenses against a cat.”

Marine scientists worry that the cats are carriers for toxoplasma, a parasite that is deadly to endangered Hawaiian monk seals.

Some scientists and residents have advocated for an official culling of the stray cat population. The Hawaiian Humane Society maintains that neutering and spaying programs are the only appropriate means of population control.

“These are domestic animals,” says Ms. Kendrick of the Humane Society. “They would not be in the community if we didn’t put them there.”

Both sides bring an intense compassion for animals to this debate. But they are talking on two different wavelengths.

”The problem is that everyone is right to a degree,” says Charles Littnan, director of the protected species division of the National Oceanic and Atmospheric Administration. “But we’re having two different conversations.”

When it comes to marine life, many residents and advocates worry that tourists are loving these creatures to death. 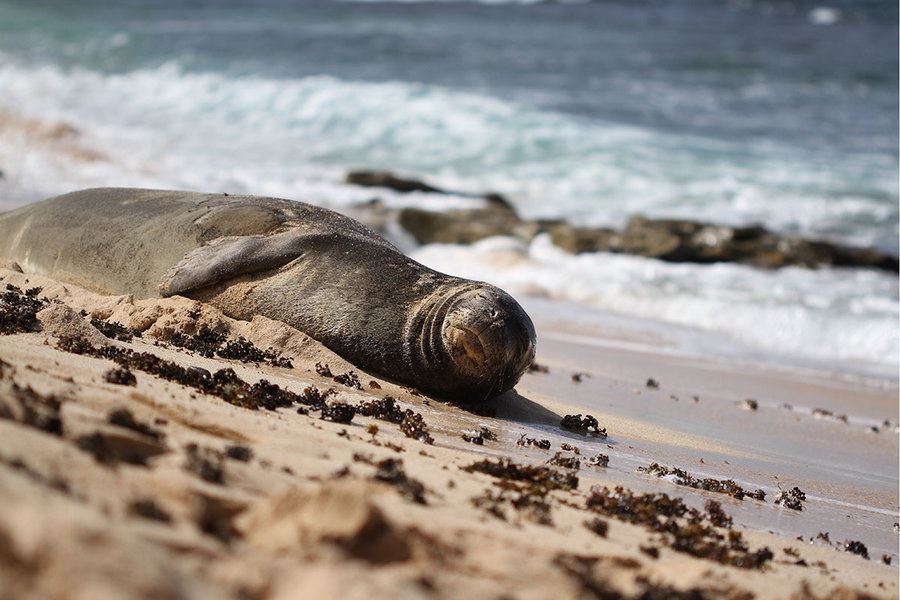 Found only in the waters and shores of Hawaii, Hawaiian monk seals, shown here in a 2012 photo, spend two-thirds of their time at sea, coming to land only to mate and give birth. Citizen volunteers routinely patrol beaches to protect monk seals from tourists who get too close.Henry Lydecker/USFWSTourists flock to areas where they can get so close to wildlife that they can literally reach out and touch them. At Hanauma Bay, an iconic reef that draws some 3,000 snorkelers per day, staff implore visitors not to pet the sea turtles or step on the fragile corals. But for many tourists the urge to do so is strong.

Exploiting that desire, some tour companies bring gaggles of tourists to swim with dolphins while they sleep. On Oahu’s North Shore, motorists routinely stop traffic to glimpse sea turtles basking or nesting on Laniakea Beach.

Some citizens have taken it upon themselves to protect these creatures from onlookers. On Oahu, a team of 96 volunteers takes turns staking out the beach to keep tourists from getting too close.

A similar band of citizen scientists patrols the beaches for monk seals, which often haul themselves up onto the sand to bask in the sun. These volunteers perform a “vital function,” says Dr. Littnan, who previously led NOAA’s Hawaiian Monk Seal Research Program.

“They become experts, first responders, and the primary outreach workers ensuring the safety of these animals,” he says.

The cats too have angels looking out for them. Some residents leave food out for a neighborhood stray or two. Others have organized into groups that manage colonies, supplying food and coordinating trap, neuter, and release events.

At the Hawaii Kai Park and Ride, it soon becomes clear what has drawn the animals to this particular spot as a pair of headlights sweeps across the lot and a couple and their 5-year-old son pile out of the car.

The little boy runs toward the cats shouting “Here, kitty!” as his father heaves a 30-pound bag of dry cat food out of the trunk of the family CR-V. He tips the bag and drags it across the parking lot, leaving a length of kibble a couple dozen feet long.

The family isn’t part of the group that manages this particular colony. But they make a point to pick up food for the cats every time they go to the Costco across the street.

As for why they do it, “I just feel so bad for the cats,” the man says. “They’re living beings, too.”