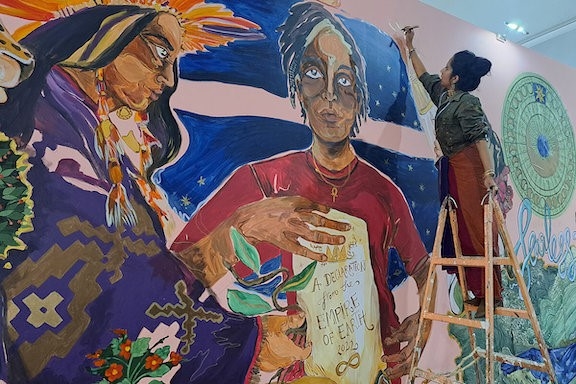 An activist paints a mural depicting climate justice, at the entrance to the Children and Youth Pavilion at the COP27 climate conference in Sharm el-Sheikh, Egypt, on Nov. 14, 2022. Taylor Luck

When I wanted to get the pulse of this year’s climate conference COP27, I made a beeline to the Children and Youth Pavilion.

There, artists painted, Indigenous people chanted, impromptu groups sang. Forget about the negotiators’ conference-hall huddles—this is where the action was.

There I met Rahmina Paulette livestreaming at the pavilion, wearing a T-shirt with the words #LetLakeVictoriaBreathe – her initiative to save her home Lake Victoria region.

The 17-year-old Kenyan, like hundreds of other young people from around the world attending COP, found herself thrust into climate activism as a child. It was the disappointment of being unable to take a boat ride due to Lake Victoria’s pollution that awoke Rahmina to the climate crisis.

“Being loud is not enough. We want to be listened to,” she says.

She shares young attendees’ hopes for a climate agreement: a “loss and damage” fund to pay reparations to countries hit by climate disasters, commitments to cut emissions, more adaptation funds to help communities like her town of Kisumu better prepare for the next flood or drought.

But even as trust and cooperation were reportedly breaking down between developing and rich nations in the talks’ final days on Thursday, drawing rebukes from the United Nations and host Egypt, Rahmina was eyeing the progress.

Last year in Glasgow, Scotland, at her first-ever COP, she met like-minded activists from around the world for the first time.

This year, these youths have joined coalitions. Their countries’ negotiators have included their talking points and, in some cases, brought them on board as negotiators. Youths now have a permanent pavilion.

These are steps, not leaps. But in dealings with the politicians of the world, steps can build momentum.

“It’s a big win for us for children to be included in the climate discussions,” she says. “We younger people are the ones who will push countries until there is climate action either at this COP or the next.”

Rahmina and her peers have every right to be angry: Their schools are being shuttered; their future may see 2 degrees Celsius or more of warming.

But amid talk of setbacks, fossil fuel influence, and warnings of “climate hell,” I found hope from the generation that has been left the most disappointed.

Should governments reward these young people’s own hope by listening, climate justice will be, as Rahmina says, “inevitable.”

This article appeared in the November 18, 2022 edition of the Monitor Daily.