For ‘our kids,’ a bundle of dignity for youth in foster care

by David Karas from ROCKVILLE, MARYLAND

How can a stranger’s home feel more like your own? For kids in foster care, a sense of belonging may start with belongings. This nonprofit eases the transition by trading trash bags for a care-packed tote – a self-worth boost.

NOVEMBER 22, 2019 - ROCKVILLE, MARYLAND - When Rob Scheer and his husband Reece’s first adopted child arrived at their home, the 4-year-old’s world fit into a trash bag. The pink pajamas inside that bag had feet so tattered and worn, the material was nearly transparent. The Maryland couple took her shopping to get everything she would need to start her new life – including a pink robe. 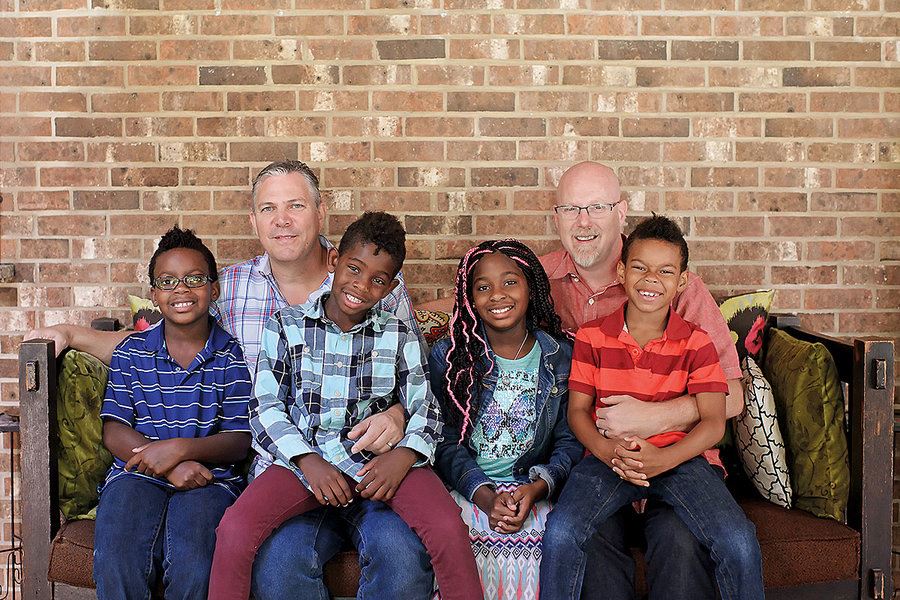 Rob Scheer (second from left) and Reece Scheer (second from right) started nonprofit Comfort Cases as a way to teach their children about giving back.Courtesy of Joyce Smith/Comfort CasesRob Scheer recalls her wearing the robe with a big smile on her face. “I’ve never owned a new nightgown before,” he remembers her saying. The couple was disheartened to see that each of the four children they’ve adopted out of the foster care system arrived carrying toys and clothing in trash bags. “That trash bag just weighed so heavy on my heart,” Mr. Scheer says.

The image cued a flashback: Having grown up in foster care himself, he once carried a similar bag moving into a new home. Mr. Scheer was troubled by the lack of dignity afforded to children in the U.S. foster system. He decided to act: Along with his husband, Mr. Scheer founded Comfort Cases in 2013.

Based in Rockville, the nonprofit provides children in the foster system with proper bags packed with essential and comforting items – shampoo, blankets, pajamas – that are sent to family services agencies across the United States.

Comfort Cases are packed for various age ranges, and each includes an activity: a coloring book for those under 10, a journal and writing set for older children. To date, Comfort Cases has served more than 85,000 children in all 50 states, along with the District of Columbia and Puerto Rico.

“I understand that a Comfort Case isn’t going to make it all right,” Mr. Scheer says. “But it’s a step in the right direction.”

The idea began as an activity for the Scheers to teach their children about giving back around the holidays. They never thought that the self-funded service project would blossom into a nonprofit that has supported children across the country. The organization has distributed 62,000 Comfort Cases and an additional 25,000 “Comfort XLs” – larger duffel bags.

Phil Tavolacci and his husband, Jeff, of Silver Spring, Maryland, have fostered five children; some arrived in emergency situations. “Three of the children we had with us for short stays came with fully packed and beautiful Comfort Cases,” Mr. Tavolacci said in an email. He noted a “heightened level of self-worth” in the children who arrived with the special backpacks, versus those who came with their few belongings in a trash bag. 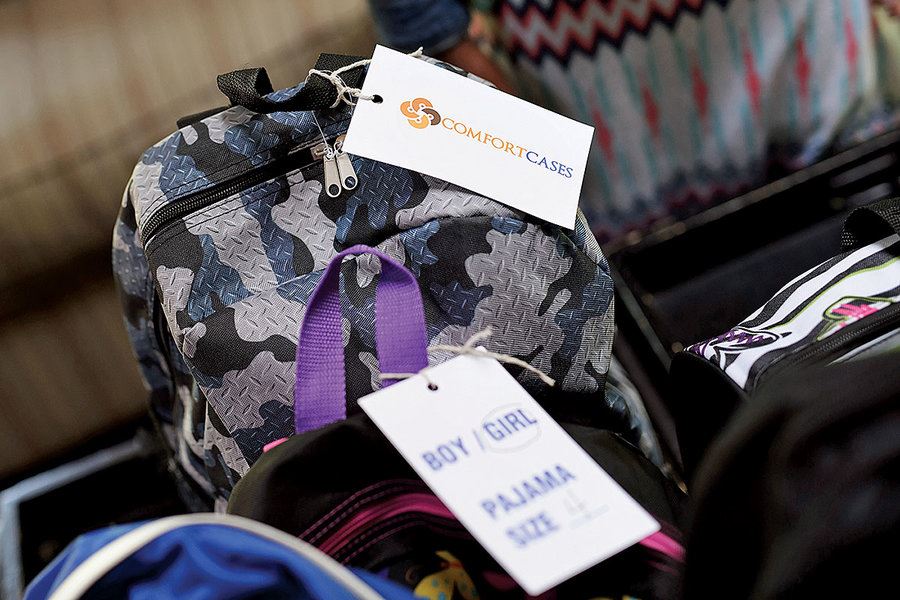 Comfort Cases has served more than 85,000 children in all 50 states. The bags are packed with essential and comforting items – shampoo, blankets, pajamas – that are sent to family services agencies across the U.S.Courtesy of Joyce Smith/Comfort CasesMr. Tavolacci, a physical therapist, recalls how one little girl loved the stuffed animal that came in her case, and several boys appreciated the blankets. “Comfort Cases is doing so much to help children in foster care to feel valued, and valuable, and loved,” he says.

Mr. Scheer’s dedication to the cause is born of his own childhood experience as the youngest of 10 children, living with an abusive father and a mother addicted to drugs. “I still have scars from where my father put a cigarette out on my legs, over and over,” he says.

After his parents died, Mr. Scheer wound up in foster care at the age of 12, carrying what few belongings he had in a trash bag. He distinctly remembers taking his first shower in his new home, with a bar of soap already used by a family he barely knew. “Those kinds of things that people don’t even think about weighed heavy for me,” says Mr. Scheer.

He remained in the system until his foster parents kicked him out at age 18. Despite being homeless, he finished high school and landed a minimum wage job. He eventually joined the Navy and later found a job at a bank, working his way up to an executive position. After a successful 25-year career, Mr. Scheer stepped down to dedicate his efforts to Comfort Cases and traveling the country to talk about the foster care system.

When Twinbrook Baptist Church in Rockville closed its doors in August, it announced that proceeds from the building’s sale would benefit various organizations – including Comfort Cases. The Rev. Jill McCrory, the church’s former pastor, organized a packing party for the nonprofit as a service project. She was moved by the image of a child entering foster care with only a trash bag.

“The anguish of being uprooted and entering a strange home, and being treated as if your belongings and you are trash, is something no child should have to experience,” she said in an email. “When you hear [Mr. Scheer] talk about his vision for foster care and these kids, you can hear his passion and his love. ... He truly wants to bring about enormous change and I believe he has the energy, heart and capacity to do it.”

Julie Holstein, a childhood friend of Mr. Scheer, works for the homeowners association for Broadlands, Virginia. When she was tasked with finding a volunteer opportunity for youth in the community, she thought of Comfort Cases. “We have a very affluent county,” says Ms. Holstein in an email. “Comfort Cases has provoked [in] our student population the thought that not everyone is as affluent as the next person, and sometimes a little bit of kindness goes a long way.”

Ms. Holstein first met Mr. Scheer when the two were in middle school. They had friends in common, and were in touch occasionally over the years. But it wasn’t until she learned about Comfort Cases that she fully understood her friend’s upbringing. “I was stunned to find out I basically knew nothing about him,” she says.

She finds inspiration in Mr. Scheer’s efforts to transform a negative experience into a means of helping others. “Not only did Rob choose to do something positive with his life experience, he’s motivating others to consider someone other than themselves,” Ms. Holstein says.

With only four employees, Comfort Cases is largely run by volunteers. Mr. Scheer hopes that learning about the realities of the foster care system and the struggles that children inside it face will encourage more individuals to help.

“We think these are bad kids, and forgotten kids and invisible kids,” he says.“But in the end, they are your kids, they are my kids, they are our kids. The kids don’t belong to the system – they belong to us.”