by Caitlin from Montvale 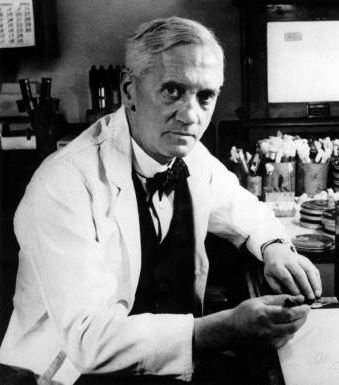 On a farm in Scotland on August 6, 1881, an amazing person was born. This amazing person was Alexander Fleming. As a boy he roamed the countryside with his 8 siblings who lived with him in a desolate area of Scotland. The Fleming children had a love for the flora, fauna and merry weather that surrounded their farm for miles. "We unconsciously learned a great deal from nature," he said at a later time in his life.

After his father passed away, Alec, who was 14, and 4 siblings moved to London. The eldest brother took over the Fleming's family farm. Tom, a close brother of Alec, started a practice in medicine in London. He strongly encouraged his younger brother to do the same. Alexander went to school and to his disappointment was employed by a shipping firm where he worked for a little while. In 1900 war broke out and 3 of the Fleming boys, including Alec, went to war in South Africa.

Fleming won a scholarship to St. Mary's Hospital Medical School in London. He went on and passed exams and completed his medical training at the Royal College of Surgeons in England. In that same year he published a paper on a field he would excel with in the future, immunology. He also wrote more papers on immunology and chemotherapy and original descriptions of lysozyme and penicillin.

Over the next few years he worked in a laboratory of the Royal Army Medical Corps as a doctor in World War I. He saved many lives with his discoveries. He proved pus helps fight diseases and developed a new treatment for a common disease, syphilis. But Alexander made his most important discoveries while he was doing research in the inoculation department at St. Mary's. He proved that an enzyme found in body liquids (tears) called lysozyme had a natural antibacterial effect.

While doing further research, Fleming accidentally made a huge discovery. In his cluttered lab, he saw that in a contaminated lab culture a common mold, like that found on stale bread, was growing. Although that wasn't surprising, what it was doing was! The staph bacteria in the contaminated dishes had been killed around the mold. He called this mold penicillin. Fleming said "One sometimes finds what one is not looking for."

He carefully tested his new creation on animals but without harming them, since he had loved living creatures all his life. His discovery was made in 1929 and was printed in magazines, but raised little interest until World War II when it saved many lives. Today penicillin is used to treat all kinds of bacterial infections.

Fleming received the Nobel Peace Prize in 1945, which he shared with Howard Florey and Ernst Chain who finished Fleming's work. He was knighted in 1944. Sir Alexander Fleming died on March 11th in 1955 and was buried in St. Paul's Cathedral.