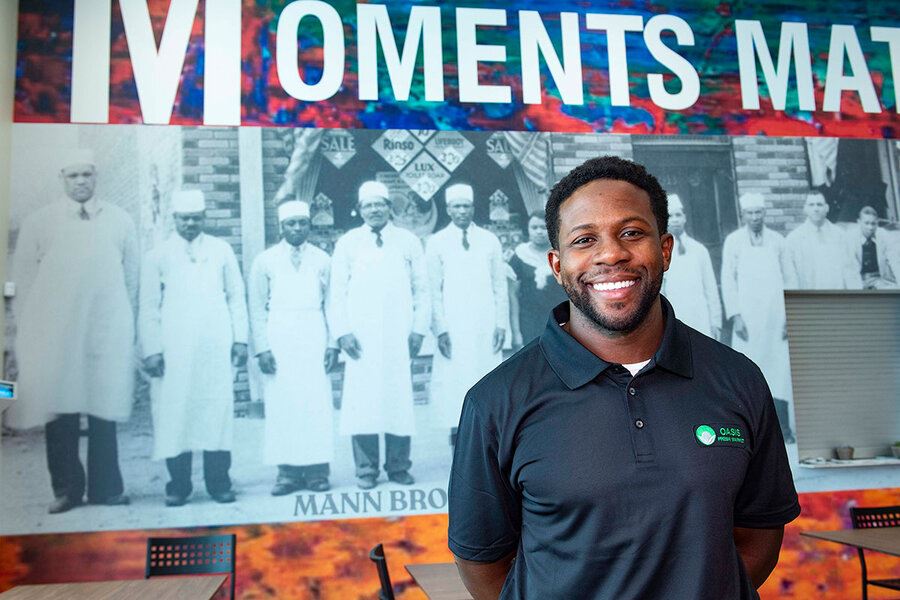 Aaron Johnson, owner and operator of Oasis Fresh Market, stands for a portrait in front of a historical photo of the Mann Brothers Grocery Store posted inside Oasis on July 14, 2021, in Tulsa, Oklahoma.Ann Hermes/Staff

In March 2021, when Aaron “AJ” Johnson was designing the interior of the first full-produce grocery store to open in North Tulsa in years, he made a special request of the local historical society. He wanted to find a photograph of a historic, Black-owned grocery store.

Now an enlarged picture of a group of Black grocers standing outside the Mann Brothers Grocery Store, taken in 1930, spans a wall of the airy cafe at the new Oasis Fresh Market, which opened in May. The Mann Brothers’ store was in the Greenwood district of North Tulsa that was destroyed during the 1921 Tulsa Race Massacre. Their store, which the grocers rebuilt and continued to successfully operate, was located less than a mile from Oasis.

“Without them, I wouldn’t be here,” says Mr. Johnson, pointing to the mural. “We’re honoring the past and standing on their shoulders.”

Features like the mural are important to Mr. Johnson, a Tulsa native and the majority owner and operator of Oasis Fresh Market. It points to the unique role he hopes the store will play in the community, long considered a food desert because of its high poverty rates and lack of stores selling fresh produce.

Oklahoma has some of the country’s highest numbers of food-insecure households, and local organizations saw a steep increase in hunger during the pandemic. But supporters of Oasis Fresh Market see it assisting residents with needs beyond food, as well as providing an outlet for middle and upper income residents to spend their money in their local community.

The market, a $7 million project funded with public and private capital, launched jointly with a nonprofit arm that holds community events designed to link residents with services and information on topics like healthy living and homeownership. The effort shows how community members are taking the lead on finding solutions to long-standing disparities, ranging from access to fresh food to lower life expectancy rates than in neighboring sections of Tulsa.

“Our motto is, ‘More than just groceries, equipping you for life,’” says Mr. Johnson. “As a business, you have to stay profitable, but the metrics that matter most to me are, what is the community saying about the store? How many lives are we changing with our nonprofit and grocery?”

A yearslong focus on fresh food

Tulsa is a “highly segregated city,” according to a 2019 Human Rights Watch report. A large percentage of the city’s Black population lives in North Tulsa, which is separated from other parts of the city by a major highway. The unemployment rate in North Tulsa is more than double the rate of the rest of the city, and life expectancy is six years shorter.

Vanessa Hall-Harper, chair of the Tulsa City Council and representative for the district where Oasis Fresh Market is located, has worked on getting a grocery store in the area since taking office in 2016. She first approached local grocers and then asked national chains, but no one was interested.

“After those requests went unheard, I said how can we build a store to address the issue of food deserts, something that could be duplicated?” Ms. Hall-Harper says.

Albertsons, the last major grocer to serve North Tulsa, ended its operations in the state in 2007. Since then, smaller grocery chains have opened and closed. The last grocer stocking fresh produce closed in 2017, leaving some North Tulsa residents with long bus rides to get to a grocery store.

Before Oasis Fresh Market opened, Ms. Hall-Harper pushed the city council to pass restrictions on new dollar stores in her district. The proliferation of dollar stores, with inexpensive nonperishables, created competition for full-service grocers and offered residents less healthy options. She also partnered with the Tulsa Economic Development Corporation, owners of the land where Oasis market is located, to secure grants from the city and the U.S. Department of Housing and Urban Development and raise funds through private philanthropy and investment.

On a recent afternoon, cashiers at Oasis greeted customers enthusiastically. Friendly customer service and a clean, welcoming atmosphere are important to Mr. Johnson, the former executive director of the Tulsa Dream Center, a nearby nonprofit that provides food, education, and health programming for families.

He knows there’s some skepticism about whether a grocery store can survive in the area, but he emphasizes the role he hopes community members will play in supporting the store and keeping it in business.

“The community understands we’ve got to shop here,” says Mr. Johnson. “I tell people all the time, ‘It’s your store.’ That’s why it says ‘Welcome to your market.’ If you see someone stealing, are you going to say something? If you see trash outside, are you going to pick it up?”

The store employs 43 people, almost all of whom are residents of North Tulsa. Aqueelah Jihad started working as a cashier in July. She likes the store’s friendly atmosphere and the likelihood of running into people she knows, like her third-grade teacher who recently came in to shop.

“Hope. Convenience. Gratefulness,” Ms. Jihad rattles off when asked what the store means to community residents. “I’ve heard a lot of comments of ‘we’re blessed,’” she says.

Ann Hermes/StaffSaide Kennedy holds an apple given to her by John McCarthy, chief impact officer at Community Food Bank of Eastern Oklahoma, as a part of the Free Family Farmers' Market outside Rosa Parks Elementary School on July 13, 2021, in Tulsa, Oklahoma.

The market’s nonprofit arm runs community events on the first Saturday of every month. Partners such as local health services, banks, and mortgage companies come to the store to provide classes and information. Other events include a monthly sweepstake where a family in need is awarded $1,000 and 40 minutes to shop the store by themselves.

Hunger Free Oklahoma, a Tulsa based organization, is working with Oasis Fresh Market to try to implement their Double Up Oklahoma program, which augments the money spent on Supplemental Nutrition Assistance Program (SNAP) purchases with DUO Bucks to be used for fresh produce. Hunger Free Oklahoma expects the program to cost $200,000 to $250,000 annually and is lobbying for state funding to sustain the initiative

Chris Bernard, executive director of Hunger Free Oklahoma, says he’s excited by the fact that Oasis Fresh Market is led by North Tulsa residents but has also drawn support from individuals and organizations across the city.

“What you see with Councilwoman Hall-Harper and other community members is [that] they want to bring the solutions – and then have resources help them implement those solutions. That’s what Oasis is. It was a community-driven process."

Other organizations that work to prevent hunger in Tulsa are also considering how to listen to community members about their needs and generate ideas for solutions. Jeff Marlow, chief culinary officer at the Tulsa-based Community Food Bank of Eastern Oklahoma says his organization thinks often about how they can provide food “with dignity” by offering options like free farmers’ markets for families in need.

Ms. Hall-Harper, the city councilor, is working on bringing a second grocery store to North Tulsa and hopes to inspire more Black entrepreneurs. She sees a role in her community for both for-profit stores like Oasis and nonprofits that work to prevent hunger.

“I think there will always be that need for nonprofits to help people who need food, who may run short at the end of the month,” she says. “At the same time, there are plenty of people in our community who don’t need free food, but need a place to purchase food.”

Irene Beavers is among those who appreciate the convenience. Visiting Oasis for the first time recently, she picked up some meat, bread, and produce. “This store is closer and easier to get to,” she says. “That’s the reason I’m here.