Ada Byron died one hundred and fifty years before the dawn of the computer revolution, but the theoretical work of this eccentric, dark-haired noblewoman would lay the foundations for the world's first computer program.

Byron was born in 1816 to the English poet George Gordon Noel Byron (Lord Byron) and Anna Isabella Milbanke Byron. Her parents separated when she was still an infant, and Lady Byron saw to it that her daughter's education would follow the path of her own interests. Ada studied math and the sciences to the exclusion of her father's bailiwick, literature and poetry. The young girl showed an immediate passion for mathematics and eventually was tutored by Mary Somerville--the first female member of the Royal Astronomical Society.

At age 18, while attending a dinner party at Mary Somerville's house, Ada met the highly respected professor of mathematics, Charles Babbage. Ada was profoundly drawn to Babbage's ideas and he himself was impressed by the young woman's intelligence. Later, Ada wrote to Babbage expressing her interest in working with him on his then-current pursuit: the Analytical Engine.

Babbage's diagrams and plans, up to this point, had been incapable of communicating the true genius of the engine. Into this interpretive void stepped Ada Byron. This machine, which at that time only existed only in theory, was to operate on the punch card principle. Byron immediately saw how these cards could be re-used to access and compute data.

Babbage asked Byron to translate and interpret his ideas for the Engine. In particular, Babbage agreed to Byron's request to add "Notes" to his text. These "notes," comprised of seven brief essays, 40 pages long, became an invaluable set of complex instructions for the operation of the Analytical Engine. More importantly, the notes included Byron's own speculations on the potential of such a machine.

Ada concentrated on what today we could call the "software" applications of the Analytical Engine. In this sense, one can call Byron a true visionary, for she was able to foresee that the Babbage's engine could have vast applications in the area of graphics, artificial intelligence, and the composition of complex computer music. All this more than a century before these disciplines were revolutionized by the modern computer!

Byron's accomplishments took place during an era that saw women as unfit for scientific pursuits. Of course, her upper-class standing provided her with resources and time to study and think, and also with entry into the scientific and intellectual circles of the time. Byron's husband, William King (who later became the Earl of Lovelace) and Charles Babbage, who was sympathetic to the plight of women involved in the sciences, also enabled and encouraged her work. It is interesting to note that Byron, given her social standing, was moved more out of the spirit of pure imagination than social rebelliousness.

Ada Byron was plagued by an asthmatic condition and manic depression. She also became an obsessive gambler in her later years, which caused her family much financial stress. Sadly, Byron developed cancer of the uterus and on November 27, 1852, Augusta Ada Byron died at the young age of thirty-six, the same age that her famous poet father, Lord Byron, had died.

Unfortunately, Ada Byron's accomplishments were subsumed into those of Charles Babbage. It was not until 1952, when Lord Bowen published a text that cited her accomplishments, that the world would reacquaint itself with this wonderful visionary. Today, Ada Byron receives the recognition she deserves. The Department of Defense honored her by naming a 1979 programming language ADA.

The field of computer science, and the computer revolution, owes much to the interpretative insight that Ada Byron contributed in her notes to Babbage's Analytical Engine.Like all true visionaries, Byron overcame the limitations of her era, and the results of her work appear everywhere, from the Internet to the concert hall. 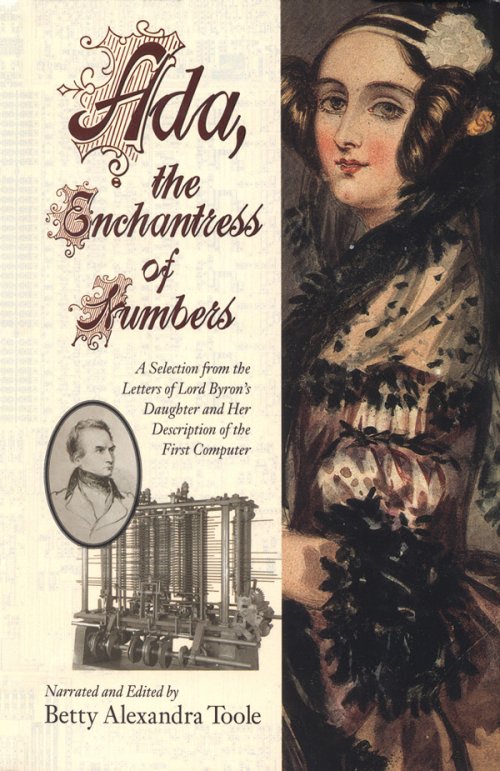 Ada, the Enchantress of Numbers: A Selection from the Letters of Lord Byron''s Daughter and Her Description of the First Computer
Betty Alexandra Toole