by Nikolay Damiani from SanDiego, California in United States

Nimtez a hero in every sailor's heart. 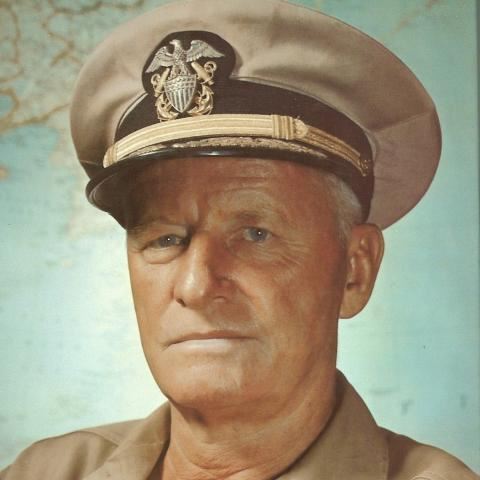 Nimtezhttps://www.lonestarflight.org/chester-nimitzAdmiral Chester Nimitz stood on his ship looking at the Japanese naval fleet before him, when he heard the beautiful roar of 100 American planes flying overhead.  They were ready to intercept the Japanese fleet. At that exact moment, the Japanese were getting ready for battle, switching there planes payload over from air to ground  bombs and to ship torpedos. Admiral Nimitz’s counter-part, Admiral Yamamoto, had no idea the United States was going to take this moment to destroy over ten Japanese ships, including five Japanese aircraft carriers. Admiral Nimitz felt exhilarated to see the plan succeeding.

He was a long way from Fredericksburg, Texas, where he was born on February 24, 1885.  He was born in his grandpa's hotel, which looked more like a boat than a hotel. Many referred to the hotel as the steamboat hotel. When he was young, his grandpa put him in charge of his steamboat hotel, and this was a big deal for him because the hotel go a lot of business, being the only hotel between Texas and California. ("Chester William Nimitz." Dictionary of American Biography, Charles Scribner's Sons, 1988. Biography In Context). His grandfather was briefly employed at sea as a boy, but grew up telling stories that led people to believe he was a retired sea captain. He equipped his hotel with a ship's bridge and pilot house. To his grandchildren, he was fascinating. But Chester W. Nimitz instead dreamed of being a soldier, not a sailor.

In 1901, he went to enlist in the United States Army, but the Army was fully committed.  As fate and his grandpa would have it, Nimitz headed to sea. He was accepted to the Naval Academy at 15 years old. He graduated in 1905, at the age of 20, 7th in his class of 114. After graduation, he was on the China Station for two years as an ensign. After he enlisted in the navy, “Nimitz served on the staff of Rear Admiral Samuel Robison, the chief of the Submarine Force,” ("Chester William Nimitz." Dictionary of American Biography, Charles Scribner's Sons, 1988. Biography In Context). He had a fear of submarines, which he overcame. He worked on them and concurred his fear. His first command was on the gunboat USS Panay.  In 1913, Nimitz was sent to Germany and Belgium to study diesel engines. He worked on the USS Maumee, the first diesel powered surface ship in the U.S. Navy.

After Nimtez was done serving under Admiral Samuel Robbins, he was ranked up to captain and was able to run his own submarine after World War 1. But, there was not much happening at this time and he was one of the very few people trained to captain a submarine due to the advancement in technology. During World War I, Nimitz was Chief of Staff to Commander, Submarine Force, U.S. Atlantic Fleet. After World War I, he had other assignments like an executive officer of USS South Carolina. He then took a job at the FBI. 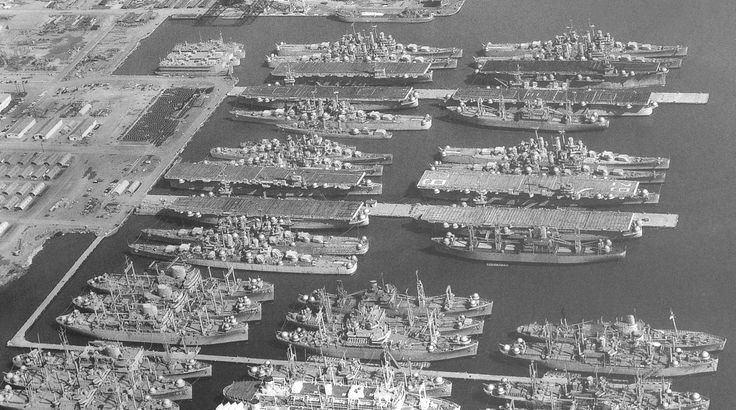 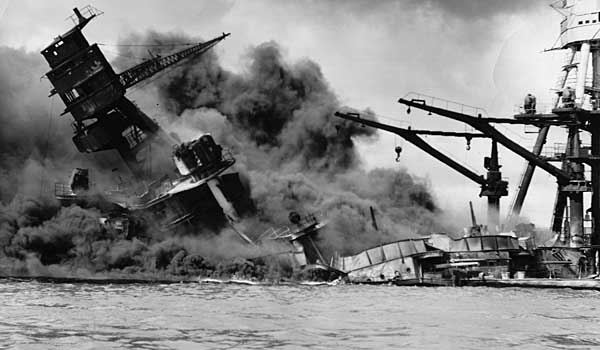 USS Arizona sinking in Pearl Harborhttps://www.britannica.com/event/Pearl-Harbor-attackNimtez was the fastest ranking Admiral in the Navy. Nimitz was serving as Bureau Chief when he was chosen to be Commander in Chief, U.S. Pacific Fleet. He became a five-star fleet admiral in December 1944. People today still talk about Chester Nimtez because he saved the west coast of the US and the Hawaiian islands from being taken over by the Japanese imperial navy. At the time, the US fleet was heavily damaged and most ships could not participate in the war effort because of the damage sustained in the bombing of Pearl Harbor. The commander of the Japanese fleet, Admiral Isoroku Yamamoto, was a smart man. He had attended Harvard University in the US and then moved back to Japan to join the navy. Although he had great respect for the U.S., he was dedicated to helping his home country. He planned the attack on Pearl Harbor and gave Nimitz a run for his money -- country vs Country, man vs man, and ship vs ship.

Chester Nimitz was fearless because he was able to join the navy and go in to the war without any regrets,  “Chen, C. Peter. “Chester Nimitz.” WW2DB, Peter Chen, ww2db.com/person_bio.php?person_id=10.” On December 7, 1941, Pearl Harbor was bombed by the Japanese Imperial Navy. It had over 180 planes that took out almost all of the American ships. That night, Nimitz was working at the FBI, where he received a call from General MacArthur and President Franklin Roosevelt.  They told Nimitz that he needed to take command of the U.S. Pacific Fleet. Leaving his wife and nine children behind, he accepted and left to save the west coast. At the time, the Japanese had taken over 98% of the pacific islands, including the island of Saipan, Guadal Canal, and many more. Nimitz was able to stop them with damaged ships from Pearl Harbor. Moreover, he was outnumbered 5 to 1.

When he took command of the fleet, he was tasked with saving the islands of Midway, which were next on the Japanese navy’s list to take over. The US had an airfield on the islands, halfway between Japan and the US, which was vital and strategic. Nimitz knew that this was going to be a challenge because he was out numbered and he had more lives in his hands than ever before. 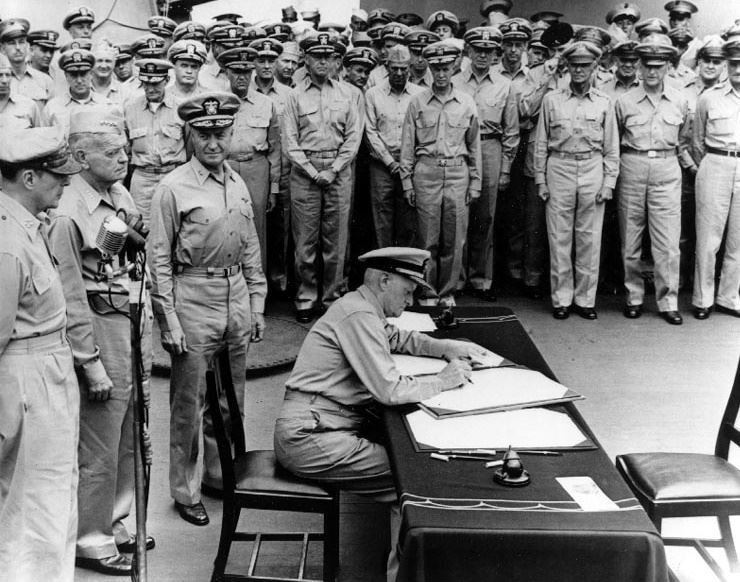 The signing https://www.awesomestories.com/asset/view/Japanese-Surrender-Adm.-Nimitz-Accepts-for-U.S.This battle changed the whole war and took out all five of the Japanese aircraft carriers. This was a really difficult battle because it required Nimitz to put his ships out in the open. He commanded about five thousand ships and two million men. This was more military power than all other commanders in all previous wars. He turned to the Submarine Force to destroy Japan's plans and force it into surrender. 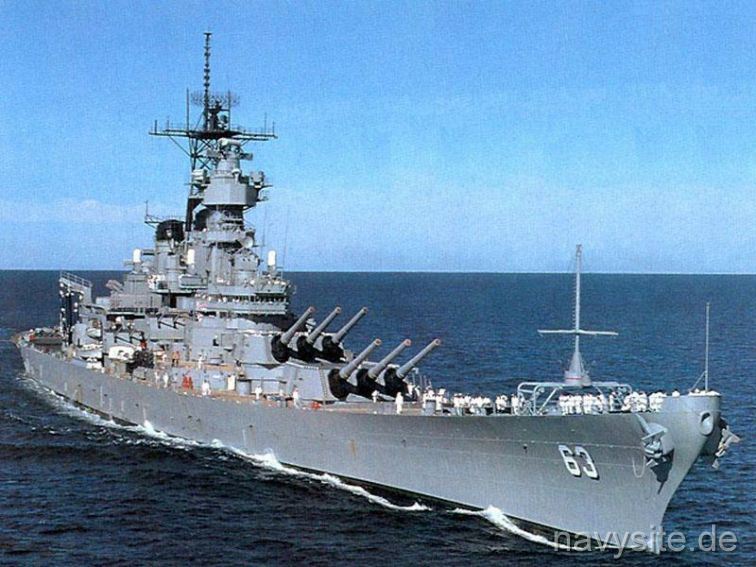 While many ships, like the Arizona, lie at the bottom of the sea, the USS Missouri stands proud in Pearl Harbor, in Honolulu, today. To stand at the exact place where Admiral Nimitz signed the surrender documents is a once in a lifetime experience.