by The Monitor's Editorial Board

In a surprising grassroots unity, much of Africa decried the violence against immigrants in South Africa. This unity may reflect a continent finding shared values and purpose.

SEPTEMBER 6, 2019 - Since the end of colonial rule, Africans across the continent have rarely experienced spontaneous, grassroots unity around a shared interest. Any solidarity is usually top-down on international issues such as trade or aid. This week, however, thousands of people from Ghana to Mozambique rallied in support of a shared interest: immigrant rights. They did so by condemning violent attacks on hundreds of immigrants in South Africa. At least 10 people died in the black-on-black riots. 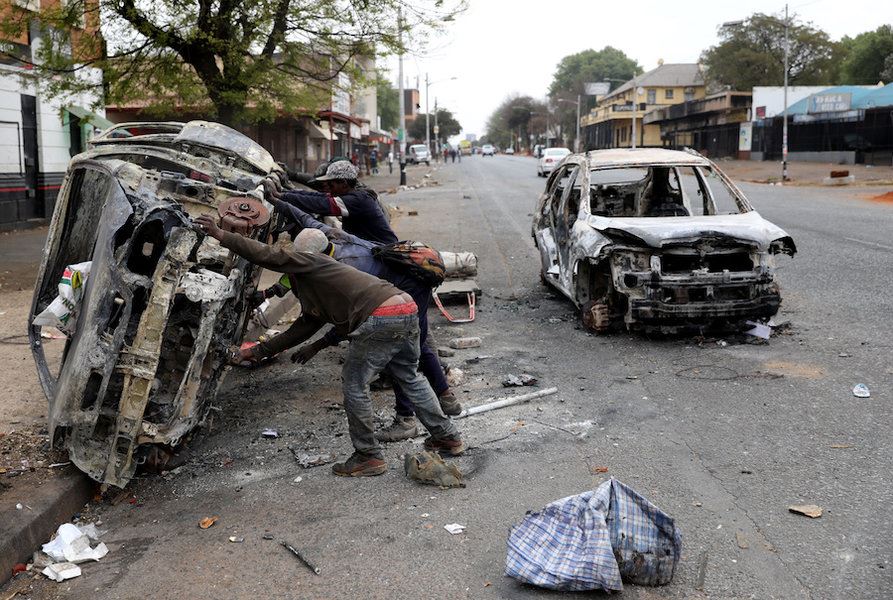 Scrap metal collectors prepare to transport a car after it was burnt during xenophobic attacks that took place earlier this week in Johannesburg, South AfricaReuters

The continent-wide reaction made clear that xenophobia – or what some call Afrophobia – should not be in Africa’s future. Two big stars in African music, Burna Boy and Tiwa Savage, announced they would not perform in South Africa. Soccer teams from Madagascar and Zambia declined to play in the country. Demonstrators in Congo stood outside the South African Embassy with signs that read “Don’t kill our brothers” and “No xenophobia.” Many flights to the country were canceled, while officials declined to attend a big meeting on trade in Cape Town.

South African President Cyril Ramaphosa joined the criticism: “There can be no excuse for the attacks on the homes and businesses of foreign nationals.”

Other African leaders went further and called for a Pan-African spirit of unity. “I call for peace between countries and African people,” said Senegalese President Macky Sall.

Twice before, in 2008 and 2015, similar anti-immigrant attacks in South Africa have raised concern on the continent. But with Africans even more connected on digital devices today and with a continental free trade zone just starting, more people are aware of protecting basic rights. Violence among Africans will only hinder “our aspirations for a shared and sustainable prosperity,” says Nigerian billionaire Aliko Dangote.

This hope for shared Pan-African values can keep in check the kind of nationalism that feeds off fear of foreigners. South Africa itself is trying to better connect to its neighbors. This year, for example, students will be taught a common African language, Kiswahili, with the goal of promoting social cohesion with other Africans.

Treatment of immigrants is often a litmus test for how a nation sees its identity and relates to other countries. In asking South Africa to change its ways, the rest of Africa is asking for a bigger concept of African identity. The unity behind this request is itself a step toward a different and better continent.