by Karan Sukheja from San Diego, California in United States 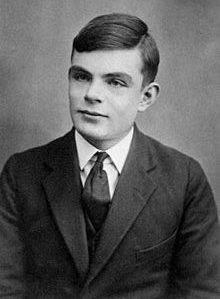 Alan Turing at the age of sixteenhttps://en.wikipedia.org/wiki/Alan_TuringFifty years ago, the amount of work that computers do today was unimaginable. The explosion of programmable computers that we see today was largely due to the work of cryptographers in World War II. During the war, the beginnings of the first computers were being developed at the GC&CS, a top-secret collection of programmers, linguists, and cryptographers, working to decipher encoded German communications. Among these was Alan Turing, a genius among geniuses. Turing was born in 1912 to a middle-upper class family in London. During his early education, his teachers recognized that he was highly intelligent. After attending King’s College, and being elected a fellow of the college, he travelled to Princeton to pursue a doctorate degree. During his time at Princeton, he put forth the idea of a programmable computer, and used it to prove that artificial intelligence cannot always know the correct answer. Afterwards, he started working at the government cypher school, and became instrumental in designing and developing the first programmable computers ever. His work was so consequential, that some of his work is still confidential to this day. After the war, he was convicted of “gross indecency” for being gay. He died of cyanide poisoning in June of 1954(Narins). A hero must put others needs above their own, even at their own peril. Doing whatever you can to help others or causes that you believe in is all that is required to be hero. Turing was a hero of his time, using his immense intellectual capabilities for not only the betterment of his nation, but of the world, and he did it all while being forced to hide his true self. 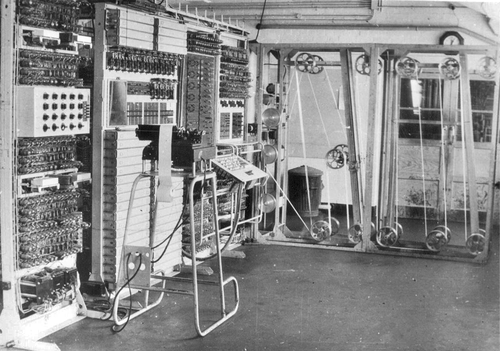 Colossus computer used to break German codeshttps://en.wikipedia.org/wiki/Colossus_computerTuring’s revolutionary research in computer science, spurred him on to help the Allies interpret German communications, and ultimately win the war. Turing’s time at Princeton provided him with valuable expertise in the areas of computers and early AI, and he proved to be a vital asset to the projects at the GC&CS: ““His experience at Princeton would be put to good use at Bletchley, and he would play a critical role in the development of a machine that would break the codes of the German's famous machine called Enigma”(Bruno, Alan Turing). Turing’s contribution to the project would lead to the cracking of the German Enigma machine, the most advanced encoding device available at that time. He could have applied his in the purely theoretical field, but he chose instead to help the Allies win the war. A hero puts others lives and needs above their own wants. Assisting in whatever way you can is all you need to be a hero, and Turing demonstrated both of these through his work at the GC&CS. Turing’s work also stretched far beyond just the GC&CS. Post war, he helped jumpstart the modern age of computers: “His landmark work also contributed to an understanding of how the thinking process is related to the process of electronic computing. Following his wartime work breaking German codes, he helped design the first British computers”(Bruno, Alan Turing). Turing’s work as a cryptographer and developing the simpler computers used there afforded him much needed knowledge and experience to build the first commercial computers. Thereafter, the beginnings of the Information Age began to take shape. Throughout his post war work, Turing had no obligation to further computers by building them. He could have gone back to teaching, or theoretical work. Instead, he decided to stay and further technology not just for the elite, but for the average citizen as well. There was no incentive to do this, yet he did it, providing another example that he is a hero. Turing’s work was immensely important during both the wartime and post war. However, after his work under the government, they turned against him. 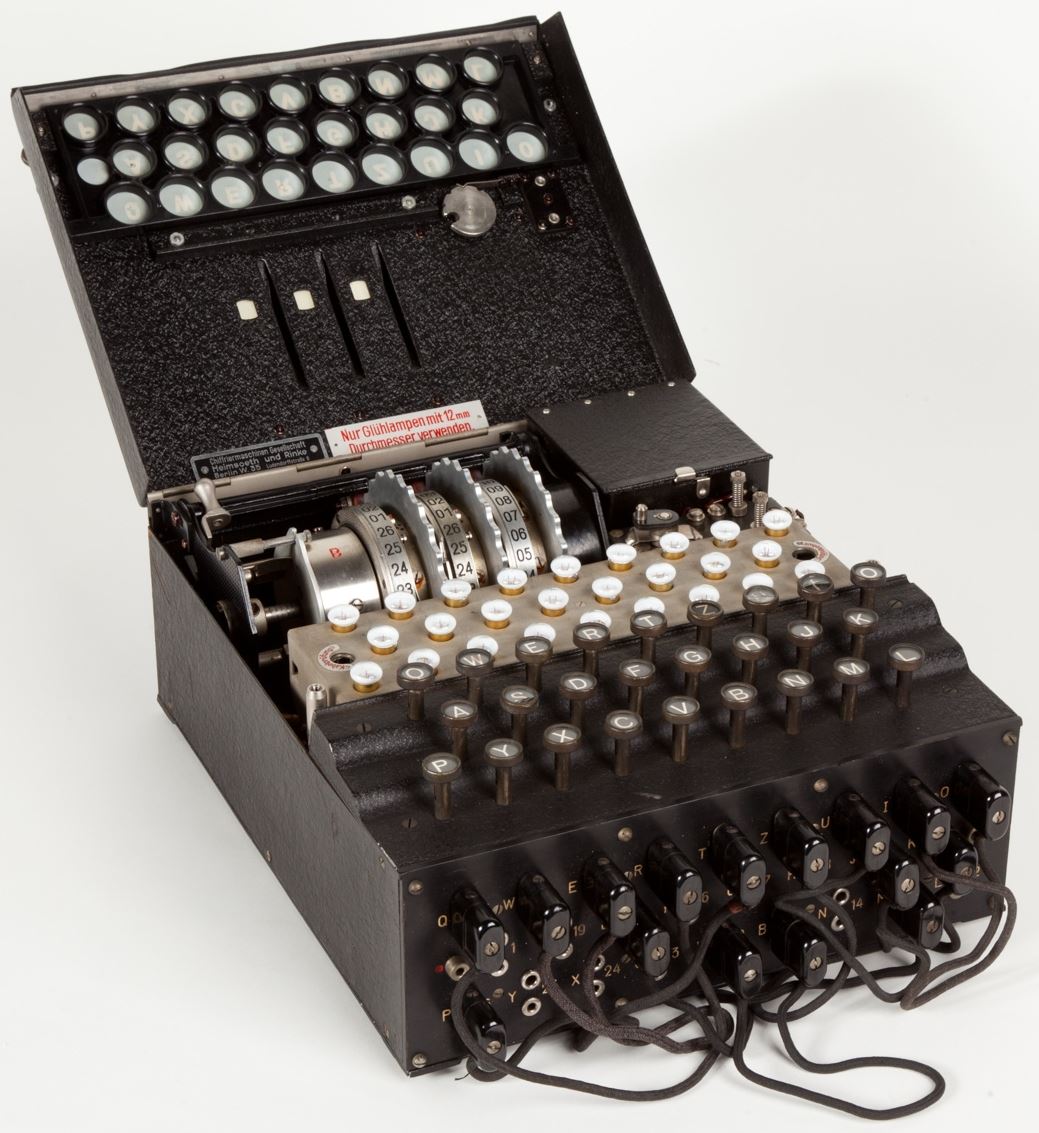 German Enigma encryption machinehttps://en.wikipedia.org/wiki/Enigma_machineAfter the war, Turing was heavily persecuted for being a homosexual, but he weathered all of it with nary a scratch on his career. His secret was discovered after a break-in by a former lover of his: “Homosexuality was illegal in the United Kingdom in the early 1950s, so when Turing admitted to police—who he called to his house after a break-in—in January, 1952, that he had had a sexual relationship with the perpetrator, 19-year-old Arnold Murray, he was charged with gross indecency”(A&E). Although Turing undoubtedly knew that homosexuality was a crime in Britain, he still made a name for himself as a brilliant mathematician at Bletchley Park. Turing did not let injustices hold him back from helping the country that despised people like him. He knew that England was his home country, and that he should support it no matter what, and in any way possible. Despite the seemingly shocking discovery that Turing was a homosexual, he managed to survive the public embarrassment: “...he had been free of the hormone treatments for a year, and he seemed to have weathered the incident with his career intact”(UXL). Turing’s life was dedicated to furthering the concepts of AI, and computers while helping his country along the way. He did whatever he could to maximize his usefulness to science, mathematics, and the whole world. He did what he did best, to the best of his ability, and in a way that helped not only his fellow colleagues, but also his country. Despite Turing’s “blasphemous” act of being gay, he worked for his country, and served as well as any person in the army or the navy. His work was just as important, and he didn’t let England’s harsh anti-gay laws hold him back from birthing the modern computing age.

Alan Turing wasn't a mathematician for the sake of it; he used his capabilities to better the nation and, in the process, the world. He did all this for his country while they persecuted him for his homosexuality. His contributions to the decipherment of the Enigma code, and his postwar work in computers and AI had profound impacts on the world in a military, and development way. Had Turing not joined the Bletchley Park group, the Allies may not have won the war. His work at the GC&CS also provided him with the skills necessary to build the first research computers, and contemplate the future of AI. Turing’s work influenced generations of programmers in the tech industry for decades. Nowadays, as AI becomes available, his work is more important than ever. He predicted that within fifty years of his life AI would come to fruition, and it looks like it is going to. We all wish to leave a lasting impact on this earth. Whether that be in a good way or a bad way is for us to decide. Turing decided that he would make a lasting impact in his own way, through math and computers. He had his flaws, like we all do, but he pushed past them, and ultimately made his mark on the world.

"Alan Turing." Math & Mathematicians: The History of Math Discoveries Around the World, edited by

"Alan Turing." Notable Scientists from 1900 to the Present, edited by Brigham Narins, Gale, 2008.