by Adi A. from Montvale, New Jersey in United States 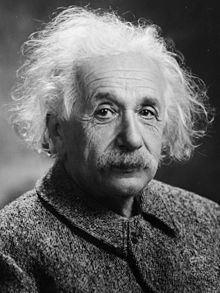 Albert Einstein, one of the world’s best scientists who made many groundbreaking theories. Speaking of Albert Einstein, that’s who the spotlight is on today! This guy found the formula E=Mc squared. Today, most of his theories are understood, but back then, they weren’t. Let’s get into his background and where he came from.

Albert Einstein was a famous German born scientist who found the formula E=Mc squared. Most say he didn’t talk until he was at the age four. He had a very creative mind and loved physics. He looked up to famous scientists that came before him like Isaac Newton, Galileo Galilei  and Copernicus. They all were heroes that lived and died before Albert Einstein. Creativity and a love of physics is what inspired Einstein to become a scientist. Slowly, his fame spread for his amazing theories. When he found the formula that he is famous for, only a few people understood it. When Einstein was about to invent the atomic bomb, he thought Germany was going to as well. So when that happened, he went to the President of the United States. His urging led to the Manhattan Project which was the explosion of a nuclear weapon. Then eventually, the atomic bomb came along. Wondering how Einstein is a hero? Well you are in luck.

This Genius was a hero because he worked very hard for the formula everyone thinks about when they hear his name. He found the formula that helped many people. He did many things that later helped humans learn about space, time and other things. For example, E=Mc squared basically says that energy (E) is equal to mass (M) multiplied by the velocity of light squared (c2). At the age of five, Albert became interested in the invisible forces of a compass. He discovered this too. These were just some of his many theories.

Einstein stunned the world several times and maybe more. Unfortunately, Einstein died on April 18, 1955. As you can see, Albert Einstein was one of the best true heroes.