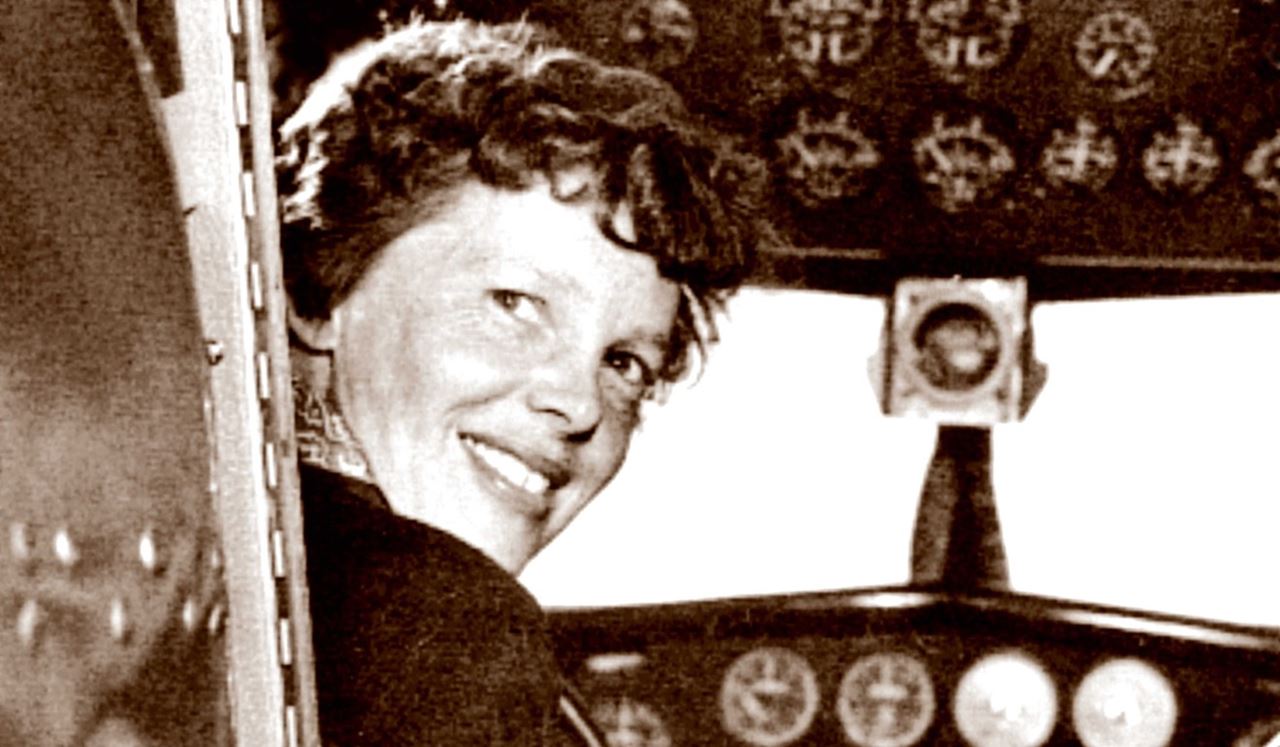 Amelia Earhart in her Lockheed 10 Electrahttps://www.scmp.com/week-asia/society/article/2134012/99-cent-chance-amelia-earhart-mystery-finally-solved-or-notBrave: an adjective often used to describe someone who is fearless. Brave: a word not many people could use to describe themselves... especially not if they were in a plane headed straight for destruction. Brave: a word that describes Amelia Earhart, a woman who proved herself brave in various situations. On July 24th, 1897, a hero was born. A hero yet to be noticed; who had yet to take action. Amelia Earhart was born in Atchison, Kansas. From day one, Amelia was not like the other kids: she was a rebellious girl described as willful, stubborn, and determined. Growing up, Amelia and her family moved often;  Amelia attended six high schools before she graduated in 1916. On a trip to California in 1920, Amelia took her first flying lesson, the initial step in pursuing her growing passion of aviation. A few years later, Amelia managed to earn the title of first woman to fly across the Atlantic Ocean. A hero must be brave and determined; no notable achievement can be made without persevering through the inevitable bumps in the road. Amelia held these characteristics of a hero until the day she died.  Amelia Earhart dedicated her life to proving the sky has no limit for women through her example as a record-setting aviator who personified fearless risk-taking. 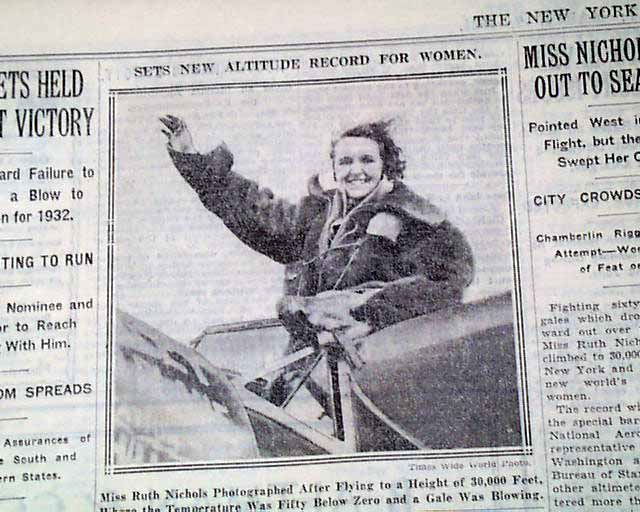 Amelia Sets an Altitude Recordhttps://www.rarenewspapers.com/view/555600Amelia Earhart proved her mettle as a hero by becoming a record-setting aviator. Often flying solo, Amelia set records in everything from speed to altitude to distance. “In her Vega she set a women's speed record by flying 181 miles per hour. She set a new altitude record by climbing to 18,415 feet” (Fleming 69). In setting this speed record, Amelia proved that she was a woman capable of achieving impressive aviation records and firsts. Her heroism was earned through the determination and perseverance required to set this record. Amelia showcased heroism through her determination to succeed in aviation...no matter what the cost. She showed little regard for her mortal life or reputation, taking great physical risk with unlikely odds. She wasn’t concerned about what society thought of her wild ambitions. Ironically, Amelia’s high-spirited attitude and disregard for fame ultimately led her to be crowned America’s sweetheart. “The first woman to fly solo across the Atlantic, Amelia Earhart was one of America’s first celebrities” (Public Broadcasting Service). Amelia’s achievement of being the first woman to fly solo across the Atlantic cast her as America’s sweetheart and thus made her one of America’s first female celebrities. Her accomplishments were publicized to the world; many considered her the female version of aviation great Charles Lindbergh. Amelia is a hero because she proved women are just as determined, courageous, and skilled as men; Earhart inspired women to adventure outside their comfort zone to strive to achieve their goals. Amelia proved society’s low expectation of women and their ability to contribute in the workplace wrong by setting multiple records in aviation.

Amelia's Daily Attirehttps://www.threadforthought.net/crossdressing-history-women-politics/Amelia further demonstrated heroism by taking on the role of a fearless risk-taker. Throughout her life, Earhart welcomed risk in both her social life and in pushing herself to her physical limits. “She was an irrepressible tomboy who spent much of her childhood years growing up on the farm of her Uncle Otis, near Atchison, Kansas. She loved to explore river caves and engage in other tomboy activities, such as playing football, baseball, basketball and other sports that required great amounts of physical energy” (Contemporary Heroes and Heroines). Amelia was a hoyden who enjoyed competition in rough sports; she wasn’t afraid of getting injured or being teased by peers for her unusual interests. Earhart’s reckless attitude reveals heroism: Amelia didn’t limit herself to society’s stereotypes or expectations for women. Amelia rejected stereotypes and took the risk of being labeled an outcast. She was an adventurous female determined to do what she wanted in life; she knowingly took the risk of being judged by others for the benefit of independence. This autonomy empowered Amelia to take bigger and bigger risks, such as buying a plane that was not proven to be safe or reliable. “She hired Neta Snook, the first woman instructor to graduate from the Curtiss School of Aviation, to teach her. She paid for the first lessons by driving a sand and gravel truck. After only 2½ hours of instruction, she decided that she wanted to buy her own plane. She bought a small experimental plane that cost $2,000 with money advanced by her mother and took a job at a local telephone company sorting mail to help pay for it” (Explorers & Discoverers of the World). Amelia’s decision to buy an experimental plane after only a brief flying lesson shows her to be a risk taker: because the plane was unproven and untested, Amelia’s actions could be described as reckless. Amelia was well aware of the dangers, but her passion for flying superseded her fear.   Risk-taking in pursuit of a goal is a key defining trait of a hero; Amelia possessed the moxie to take frequent and tremendous risks for love of flying. Whether playing sports or flying planes, spirited Amelia never played it safe and displayed heroism through her dauntless behavior and achievements. 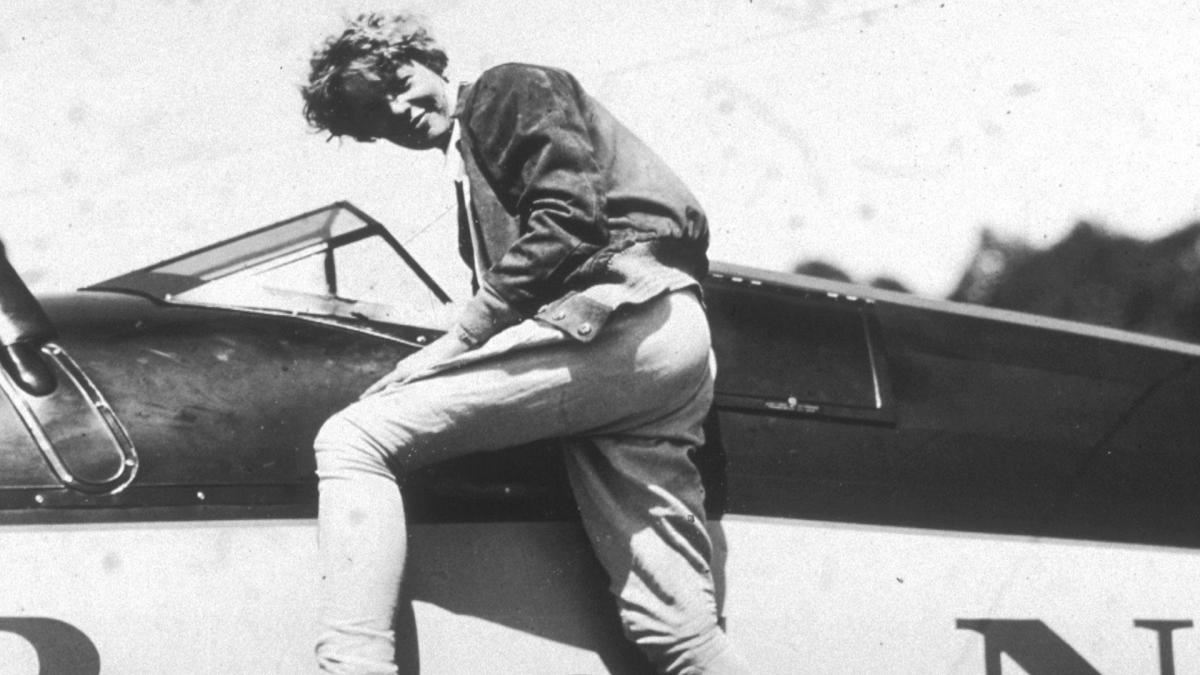 Amelia's Love for Planesbiography.comAmelia Earhart dared to showcase heroism and the power women are capable of attaining through her life as a courageous, record-setting aviator. Throughout Amelia’s life, she took many audacious risks. Well aware of the hazards of the unestablished field of aviation, Amelia possessed the mettle to push past fear and out of her comfort zone. A record-setting pilot who worked hard to achieve her goals, Amelia set many records and completed many “impossible” challenges. Earhart was noticed by the public for her hard work, perseverance, and determination that demonstrated heroism. Amelia earned accomplishments society didn’t think were possible for women to achieve, breaking female stereotypes and winning the respect of people across the globe. She proved anyone was capable of achieving anything they set their minds to accomplish. Earhart imparted confidence, courage, and inspiration to the world by encouraging them to step out of their comfort zones to pursue their goals.