If you had told me ten years ago that in 2020, one of my besties would be a devout Palestinian Muslim mom who lives on the other side of the 20-foot concrete separation barrier dividing my home in Jerusalem from hers in Abu Dis, I would have cocked my head with a half-smile, raised an eyebrow, and thought, wow, that would be cool.

But it's never going to happen.

That's because I'm an American-Israeli Orthodox Jew who had had little opportunity to meet and develop close relationships with Palestinians, let alone a best friend. 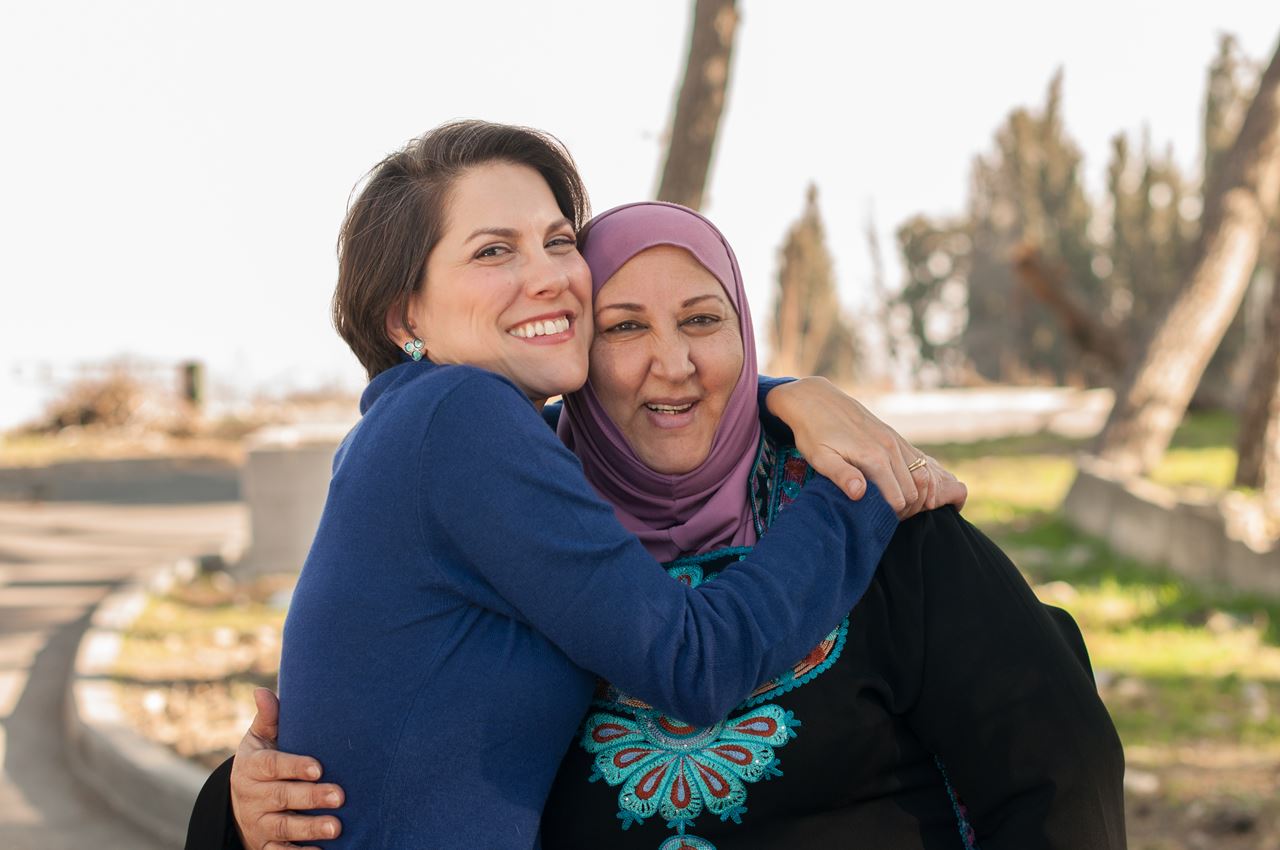 It is a sad reality that most Jewish and Arab Israelis have only superficial relationships with one another. They interact casually in public and commercial spaces, such as malls, hospitals, offices, universities, and parks, and sometimes at work. But they have little to no social interaction. Jewish Israelis are even less likely to know Palestinians who live in the West Bank, where Ibtisam lives, or Gaza. Nearly all Palestinians living in the West Bank need an entry permit issued by the Israeli Civil Administration in the Palestinian Territories to come to Jerusalem. Day to day, Israelis and Palestinians are physically and psychologically divided by walls of all kinds.

Those divisions make it easy for each side to not see, meet or befriend the "other," to assume that other is nothing but foe. So it's no simple feat to develop close friendships across the divide, let alone become best friends.

Even before I met Ibtisam, I did have a few Palestinian friends.

I'd participated in Israeli-Palestinian dialogue groups for several years and had met and become friends with Palestinian men who shared my vision as peace activists. Yet I somehow wasn't able to meet Palestinian women in an environment that fostered intimacy and friendship.

Beyond the challenge of overcoming the language barrier, cultural differences, and sense of familiarity is that other crucial ingredient that is vital to imbue every friendship with sparkle: chemistry.

The elixir of friendship that greases the wheels of togetherness—who among us can pinpoint when it works, how it works, why it works. You don't quite know when you walk into a room who could be your heart person—who might make you laugh, caress your tears, get your back. Whose voice and affection could bring your shoulders to settle, soothe you like curling up with a hot cup of tea on a rainy day. And steer you clear of your dark, unreachable corners.

But when you happen upon that friendship fit, that compatibility swathes you in the comfiest blanket. Its rightness props you right up.

I remember the day I met Ibtisam. It was a sun-splashed Wednesday afternoon in March 2011 in a nondescript conference room. We were both attending a meeting of the Cope Forum, a group that brought together Israeli and Palestinian breast cancer survivors for support and exchange. It was started in 2000 by the American Jewish Joint Distribution Committee’s Middle East program, in partnership with Patient’s Friends Society, a Palestinian NGO, and the Israel Cancer Association.

As I drove to the meeting, I wasn't thinking about friendship. I was distractedly blowing air into my shirt because my charred skin still prickled with the aftereffects of radiation, which I'd had several weeks after my lumpectomy. Granted, I had been searching for a friend in "Breastcancerland." At the local breast cancer center near my home, I'd signed up for the English-speaking support group, the Hebrew-speaking support group, the couples support group, guided imagery, dance therapy, psychodrama, and even belly dancing. (Yes, oodles of support groups!) Those activities were meant to offer me support.

But they were also forums in which I hoped I could find a companion. Someone to whom I could complain about the hot flashes caused by my medicine, commiserate about the stress of check-ups. Someone to counter my existential loneliness. (I hadn't succeeded.)

We were doing Qigong, a Chinese form of meditation and breathing, when my eyes were drawn to Ibtisam. Her heart-shaped face was wrapped in a royal blue hijab, and there was kindness in her eyes. Her good spirits were matched by an unflappable grin.

We started talking, and discovered uncanny similarities in our personal narratives. Also similar were our big personalities.

On that first day, I could already sense how Ibtisam was very comfortable with herself. She's very easy to be around. She knows who she is. I feel the same. We share that. We both have tremendous faith in God/Allah, and we don't care what people think. We spend lots of our time together laughing.

Over the years, intimacy and kinship have woven between us like a rich, textured quilt. In the nine years since we met, Ibtisam has modeled surviving breast cancer with dignity and grace. She has supported me through all kinds of things. I've become her go-to person, the first friend she called when her stepdaughter got engaged and the one to whom she cried when her mom passed away. Our friendship has weathered war. In fact, we serve as each other’s support system when violence reigns and blood is shed. During Operation Protective Edge, the Israel-Gaza war of 2014, when rockets rained down on Israel and air strikes pounded Gaza, Ibtisam was often the first friend of mine to call to see how I was doing when sirens hit Jerusalem. Of course, I always rush to call her when the news reports violence in her hometown of Abu Dis.

We're now like sisters. Our families are friends. My mom visits with her on the phone from Michigan. Ibtisam and I have become peace activists. We do public speaking, hoping that our friendship-across-the-divide will serve as a model for others. I'm revising a memoir about our story.

I have grown so much from my friendship with Ibtisam. I've learned about Islam, Palestinian culture and tradition, food, customs, Arabic expressions... many things. I've tasted different flavors of bravery and faith and silliness, joy and disappointment. And about how wrong our assumptions can be about the "other" in our orbit. Our deep connection has stretched me in all kinds of ways.

So there you have it: the story of our improbable sisterhood.

Ruth Ebenstein is an American-Israeli writer, historian, public speaker and peace activist who loves to laugh. She is writing a memoir, Bosom Buddies: How Breast Cancer Fostered an Unexpected Friendship Across the Israeli-Palestinian Divide. Ruth has published her shorter writing on both sides of the Atlantic and won two first-place Simon Rockower awards, sponsored by the American Jewish Press Association. Her writing has appeared in the Atlantic, Washington Post, Los Angeles Review of Books, School Library Journal, CNN.com, WomansDay.com, Tablet, the Forward, Stars and Stripes, Education Week, Brain, Child, Lilith and other publications. She has also penned a children’s book, All of this Country is Called Jerusalem. Find her online at ruthebenstein.com, on Facebook at Laugh Through Breast Cancer – Ruth Ebenstein, and on twitter @ruthebenstein.