Although the U.S. made Juneteenth a federal holiday last year, many states across the country have been slow to recognize the holiday, which celebrates the end of slavery in America. In many states, public employees will be doing business as usual on June 19. 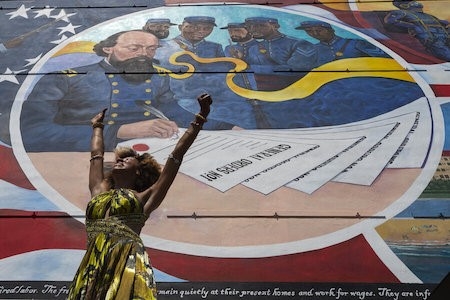 A Houston dancer performs during a dedication ceremony for the mural "Absolute Equality" in downtown Galveston, Texas, on June 19, 2021. Recognition of Juneteenth, a holiday celebrating the end of slavery in the U.S., gained traction in 2020, but has since stalled.Stuart Villanueva/The Galveston County Daily News/AP/File

Recognition of Juneteenth, the effective end of slavery in the U.S., gained traction after the police killing of George Floyd in 2020. But after an initial burst of action, the movement to have it recognized as an official holiday in the states has largely stalled.

Although almost every state recognizes Juneteenth in some fashion, many have been slow to do more than issue a proclamation or resolution, even as some continue to commemorate the Confederacy.

Lawmakers in Alabama, Mississippi, South Carolina, Tennessee, and other states failed to advance proposals this year that would have closed state offices and given most of their public employees paid time off for the June 19 holiday.

That trend infuriates Black leaders and community organizers who view making Juneteenth a paid holiday the bare minimum state officials can do to help honor an often overlooked and ignored piece of American history.

“Juneteenth marks the date of major significance in American history. It represents the ways in which freedom for Black people have been delayed,” said Democratic Rep. Anthony Nolan, who is Black, while arguing in favor of making Juneteenth a paid holiday in Connecticut on the House floor. “And if we delay this, it’s a smack in the face to Black folks.”

Juneteenth commemorates when Union soldiers brought the news of freedom to enslaved Black people in Galveston, Texas, in 1865, two months after the Confederacy had surrendered in the Civil War and about two and a half years after the Emancipation Proclamation freed slaves in Southern states.

Last year, Congress and President Joe Biden moved swiftly to make Juneteenth a national holiday. It was the first time the federal government had designated a new national holiday since approving Martin Luther King Jr. Day in 1983. Yet the move didn’t result in an automatic adoption from most states.

In Alabama, Republican Gov. Kay Ivey issued another proclamation marking Juneteenth a state holiday earlier this week after state lawmakers refused to take action on a bill during their legislative session even after she voiced strong support for making it a permanent holiday back in 2021. The state closes down for Confederate Memorial Days in April.

Similarly, Wyoming’s Republican Gov. Mark Gordon issued a statement last June saying he would work with lawmakers to make it a state holiday but no legislation was filed during the 2022 session.

“I asked many people in my district over the last few days, well over 100 people, if they knew what Juneteenth was and only two of them knew,” said Republican Sen. Joey Hensley, who is white and voted against the proposal. “I just think we’re putting the cart before the horse making a holiday that people don’t know about.”

In South Carolina, instead of working to approve Juneteenth as a holiday, Senate lawmakers unanimously advanced a bill that would allow state employees to choose any day they want to take off instead of the Confederate Memorial Day currently enshrined as a paid holiday in state law. However, the House sent the bill to a committee where it died without a hearing when the Legislature adjourned for the session.

At the same time, many of these Republican-led areas have advanced bills limiting what can be taught about systematic racism in classrooms, while also spiking proposals aimed at expanding voting rights and police reform.

This year, nearly 20 states are expected to close state offices and give most of their public employees time off. At least six states officially adopted the holiday over the past few months, including Connecticut, Colorado, Georgia, Maryland, South Dakota, Utah, and Washington. A bill introduced in California passed the Assembly and moved to the Senate this month, and individual cities such as Los Angeles have already signed proclamations making Juneteenth official.

“Becoming a state holiday will not merely give employees a day off, it will also give residents a day to think about the future that we want, while remembering the inequities of the past,” said Democratic Del. Andrea Harrison, who sponsored the Juneteenth legislation in Maryland this year. “It will help us to reflect how far we’ve come as a nation, how much more we need to do as humankind.”

Attempts to give Juneteenth the same deference as Memorial Day or July Fourth didn’t begin to gain traction until 2020, when protests sparked a nationwide push to address race after the police killing of George Floyd in Minneapolis and the deaths of other Black people by police officers.

“George Floyd protests against police brutality brought awareness to Juneteenth because there were people of all races learning about its significance for the first time following a public push to self-educate and learn more about Black history, culture, and injustices,” said Tremaine Jasper, a resident and business owner in Phoenix who has attended Juneteenth celebrations across Arizona with his family.

Some cities in Arizona, including Phoenix, have declared Juneteenth an official holiday, paying city employees and closing municipal buildings. However, lawmakers are not currently considering statewide recognition.

“There are so many other important issues that we need to tackle – education, political issues, reparations – before we prioritize making Juneteenth a statewide holiday,” Mr. Jasper said, noting that those looking to celebrate know where to go.

Mr. Jasper, who was born and raised in Arizona, said it is going to be an “uphill battle” to get the state to recognize Juneteenth because there is not a large enough Black population outside of its largest cities to make the push.

Arizona was also slow in recognizing Martin Luther King Jr. Day, not doing so until 1992. It was one of the last states to officially recognize the civil rights leader.

This story was reported by The Associated Press. Susan Haigh in Hartford, Connecticut, contributed to this report.