Andrew's commitment to peace and understanding between people began as a child. As a young boy, Andrew hated fighting and tried very hard to avoid conflict. He believed in his right, and the right of others, to live in a violence-free society. But his experience at an all boys' secondary boarding school, more often than not, compelled him to endure sufficient bullying by "bulky bogey boys."

Andrew explained to MY HERO that newcomers to the Bo Government Secondary School were dubbed as greener or rustics and that "such nomenclature implies that one is subject to intermittent punishments (drillings), such as frog jumps and even being deprived of one's food, money, or provisions by a senior boy. Yet these measures were often euphemised as discipline, although most of the excesses were done behind the scenes and away from the glare of the teachers and staff." Through Andrew's long haul to seniority, he rose to the position of prefect and painstakingly tried to curtail some of the excesses associated with being a newcomer. Andrew's commitment to peace and tolerance has developed into a lifelong commitment to children.

Following his education at the Bo Government Secondary School, Andrew attended the Fourah Bay College and the University of Sierra Leone. During his final years of study, he fled to neighboring Guinea as a refugee due to the civil war in Sierra Leone. While in Guinea, he taught English at a displaced school and later at a refugee camp. Andrew shared his path as a teacher with MY HERO: "The students (in Guinea) were mostly refugees (from Sierre Leone). It was difficult for me to earn any money; most of my teaching became charitable, to help salve the wounds of the many war-affected children."

Andrew helped students prepare for their external exams in literature and English. "At the time, we knew nothing about computers and so I prepared most of my notes by hand. I finally learned about computers late in 1998, and became an instructor at the computer school with no salary. 'Till this date, I work as a volunteer."

In 1999, Andrew joined with iEARN and decided to dedicate his life to serving and teaching children who were brutalized by the violence all around them. Andrew understood that the trauma healing skills of conflict prevention and peace building were subjects very necessary for preparing the minds of children whose lives were shattered by war. Andrew teaches after-school classes with iEARN Sierra Leone which enable children to learn computer skills, so "that when they grow up they can face the ever-increasing challenges of this info-technology world. Since my iEARN work began, I've had over 200 students now. Many of them have returned to their displaced towns and villages and many more are yet being recruited."

Andrew derives his inspiration from his mother and Dr. Martin Luther King, Jr. "My mother taught for over 30 years in a Roman Catholic Primary School in Sierra Leone until her retirement recently to have a rest with her daughters in England. I was really inspired by her dedication and skills."

"My personal hero is Martin Luther King, Jr. because he steadfastly adhered to the creed of passive disobedience to achieve his goal. In fact, King was known as the 'Prophet' who built a bridge between races." MY HERO asked Andrew to comment on the iEARN Sierre Leone Project. Here is what he has to say:

"I am aware that our project has not come close to reaching its fullest impact. Part of the reason is due to the fact that those of us on the ground, who know all too well the impact of the war on these children, lack the technological and financial resources to carry out the campaign to its fullest potential. As volunteers, we work on a shoestring budget and through personal finances.

We are proud of our accomplishments so far, but we remain in dire need of financial support to strengthen our programmatic activities, train our youth, and give them a voice through the power of the Internet."

William Belsey, Executive Director, iEARN-Canada wrote to MY HERO about his collaboration with Andrew Greene and the youth of Sierra Leone.

"We have been able to put in place ten computers in a secure, clean room in Freetown. We are working now to raise funds to bring Internet connections to these computers.

Any support from you and your contacts will go a LONG way to helping this project create a safe, educational learning environment for the youth of Sierra Leone who have been so deeply affected by the long civil war that has now ended. But the very hard work of establishing a culture of hope through peace and reconciliation remains."

"I met Andrew at the iEARN Conference in Moscow, Russia, in the summer of 2002. There were 600 people from 60 countries attending this conference, but you couldn't miss Andrew. His warm smile, his enthusiasm for the mission of iEARN and childsoldier.com, his love for teaching, and his passion for peace were written all over everything he said and did.

Now, if there was ever anyone who had reason to be resentful, despairing, and bitter, it is Andrew. Raised in a country that was divided by the violence of civil war, where brother fought against brother and sister against sister, and children were recruited to do horrific acts of violence for the self-interests of greedy leaders, he watched as an entire international community ignored the pains and struggles of his fellow countrymen as if they were not even a blip on the international radar screen.

He could easily have chosen the path of blaming others for the tragic circumstances of his country and the impossibilities of educating himself and the young people around him. He could have wallowed in self-pity, never moving a muscle to rebuild a destitute country. He could have clung to the status quo of survival for survival's sake. Instead, Andrew chose the road less traveled.

When you meet Andrew you get to know someone who is at peace with himself and the world. There is a serenity in his presence. And the serenity comes from Andrew having the courage and the faith to nurture the gifts and talents he has as an educator and to share those talents and gifts with all who come within the universe of his indomitable spirit. That serene smile comes from not believing but knowing that one step, one day at a time, his children's children will experience the impossible possibility of peace, justice and freedom from the scars of war."

Charles F. Harper
Director of Outreach
The MY HERO Project

"APPOINTING OF CABINET MEMBERS" by Arthur Zhinsman Williams from Sierra Leone. Student artists working under Andrew Greene, Jr. as part of the United Nations iEarn project have created works about the authenticity of Election Day and the transitional Government in Sierra Leone after the Rebel War. 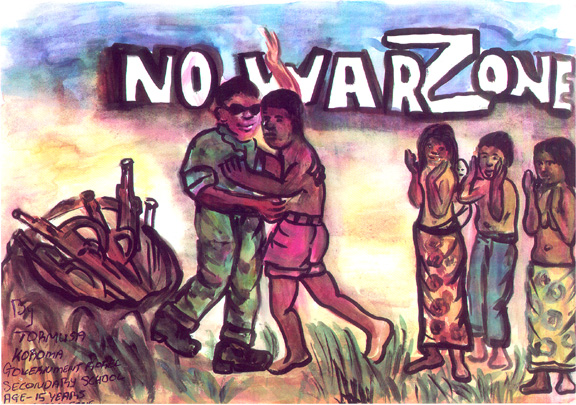 'NO WAR ZONE' by Tormusa Koromacelebrates peace among the local citizens in Sierra Leone as they welcome and embrace the United Nations peacekeeping forces.

Ahmed Lavaly, the artist of 'NO WAR ZONE 2' is a 16-year-old student taking part in iEARN Sierra Leone.

Andrew Greene is an exceptional teacher and friend to children trying to rebuild their lives. A vicious civil war in Sierra Leone, Africa, resulted in the separation of 12,000 children from their families. Boys and girls as young as seven were kidnapped and forced to become soldiers.

Andrew is helping to change the lives of these children who are victims of war. He is a mentor and advocate for all children's rights. MY HERO is pleased to learn that Andrew and his students are using technology to share their vision with others around the world.

Emile Toby, a student in Freetown, Sierra Leone, South Africa, wrote to MY HERO about his teacher hero, Andrew Greene:

My hero is Andrew Greene. Andrew Greene is the iEARN Sierra Leone volunteer coordinator for the last four years, working relentlessly to bring the attention of the local and international community to the human rights violations of children in armed conflict through the Child Soldiers.org tele-collaborative project. As war affected me as a child myself, I enrolled in Andrew's informal school of ICT and English, and was a participant in iEARN activities. I have been inspired by my leader's unwavering service to giving voices to youth affected by war who could otherwise have not been recognized.

Today, I can write to a friend in Ghana, or Morocco, or the US telling him/her about what effects the war has on my life through the power of the Internet. I can now go back to school having paid my fees because of some support that Internet friends have brought me. When I lost my father, and my mother abandoned me, not by fault, but fleeing for her life, I had no hopes of recovery, no hopes of food, health, education, etc.

Through the association with iEARN that Andrew brought us, today there is hope. Andrew hires a bus for us when he can afford it, takes us to Internet centers, and pays out of his own pocket for us all to learn. When he can't afford bus fare for all of us war-affected children, he walks with us for a few miles to the city center to get on the Internet or learn computer skills. He hunts for funding for our education, he lobbies with the government education ministry to house the recycled computers that he has managed to get to Freetown so that we will all gain and share in the experience. He loves us and cares for those who do not have the means to go and pay the high prices at private computer schools. His dream is to open up a community access center for us, the war-affected youth, and help us acquire the skills to cope and join in the computer job competitions. There are many things that I can say about my hero, but these will suffice."