by Ariel from Des Plaines, Illinois

If someone asked me who was the best shooter I've ever heard of, I'd say Phoebe Ann Oakley Mozee. Phoebe Oakley, who changed her name to Annie later, was born on August 3, 1860. She was a sharp-shooter who everyone loved. Annie was an energetic young lady with very high spirits. She was a super seamstress even though her heart was set on shooting. Annie was very spunky and loved to try new things.

She once beat her future husband in a match (which I'll tell you about later). Most people thought that Annie couldn’t shoot as well as everyone else. But she sure showed them! Once she saved her family from a wolf by shooting it and killing it. She sold the fur and ears for money because her family was in debt.

Annie lived in Darke County, Ohio. She lived in a log cabin with her seven brothers and sisters. They all lived with her mother who remarried twice. While her mother was nursing the sick, Annie went to live with a family that did not treat her well. Annie ran away.

When she went to Cincinnati, she finally was in an official shooting tournament and defeated Frank Butler in a match. She loved the match so much that she wanted to remember it and changed her name to "Annie Oakley" because Oakley was the name of the neighbor who lived next to where she was staying. Later they fell in love and got married. She was nicknamed the "Little Sure Shot," because she was tiny, and a great shot. In 1885 she joined Buffalo Bill's Wild West Show, run by Buffalo Bill Cody, and for 17 years, she was the star attraction.

After Annie was injured in a train accident, she went on to an acting career. She later taught soldiers getting ready for World War I how to fire a gun properly. She donated all of her medals to charities for widows, orphans and underprivileged women. She was honored by her fans who praised her work. She made the world understand that women are as capable as men.

Portrait of Annie Oakley
from the Library of Congress 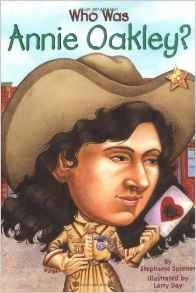 Who Was Annie Oakly
Stephanie Spinner