by Blake Caraang from San Diego, California in United States 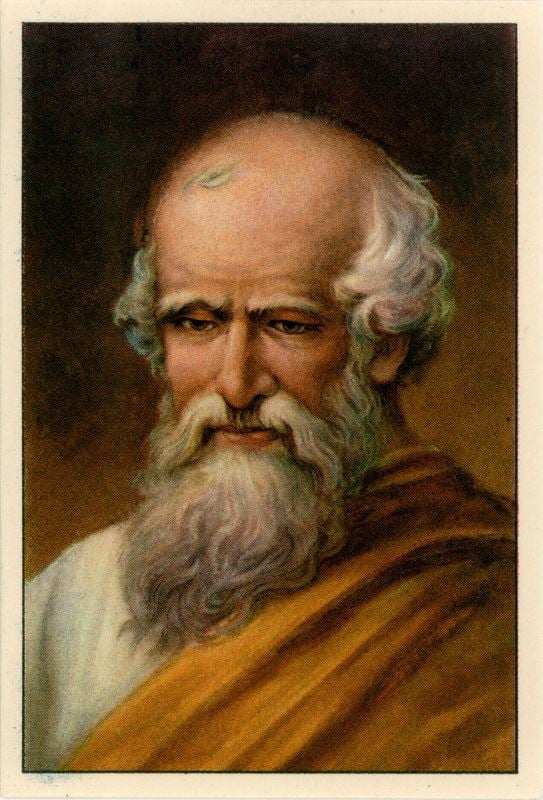 Archimedes, Son of Phidiashttps://www.artwall.ru/products/poster_25323There were many heroes of Ancient Greece. There was Odysseus, Achilles, Hercules, King Agamemnon, etc. But, there was a common trait for all these men. They were all heroes of war. They all won battles and saved lives and stuff like that. But could there be a different type of hero? In the time of Ancient Greece, while all those large figure heroes were battling the Romans and other foreigners, making the country safer, another hero was contributing to the world in different yet significant ways. Archimedes was a man of noble background and blood, descended from King Hieron, and son of an astronomer named Phidias. (Although he didn't make such a big deal out of it in his lifetime.) He was most famously known for his discovery of an accurate estimation of the value of pi. As well as, inventing three of the five most simple machines that we use in every day in life. At a young age, Archimedes left his father to go study under the philosophers at a Euclid established school in Alexandria. He gained a lot of knowledge and was known to create a few of his inventions during that time. His last couple of achievements involved attempting to save the city of Syracuse from foreign invasion. A hero must possess the trait of courage and the ability to make a change. It doesn’t always have to be a big change, although in this case, it was. Courage is the ability to harness or take control of strength, bravery, and grit, especially in times of need. Through his courageous and effective attempts to save Syracuse from invasion, and his expansion and elevation of the knowledge of science and mathematics, Archimedes represents the qualities of a true hero of Ancient Greece.

Archimede’s courage, demonstrated through his decision to stand alone against an entire foreign army makes him an admirable and inspiring figure to all. Throughout his life, his purpose had been to create and discover, never to defend. This ultimately makes him a more courageous person, never experiencing the war until the one moment when his home city was attacked by the Romans. His choice to join the fight helped to elevate his character and create a clearer image. “Some of the actual technical achievements of Archimedes are so spectacular, especially for the times in which he lived, that it is not surprising that many legends have grown up around his life story. Of the many dramatic legends that depict his skills, one involves the familiar tale of a giant mirror that he built to set enemy ships' sails on fire. Another story, tells of his building a huge crane to lift a ship entirely out of the water”(Bruno). His inventions explain his intention to defend the city thoroughly without losing human lives, which demonstrates his compassion and regard for all life in general. Along with all those fascinating and fantasy-type inventions, Archimedes created a practical weapons that was easy to control and struck the opposing side with devastating force and power. His genius mind made it easier to take advantage of the invasion and turn it into an easy win. Although, unfortunately, it turned out not to be enough. “During the Second Punic War (218-201 B.C.), Archimedes worked as a military engineer for Syracuse in its efforts against the Romans and either invented or improved upon a device that would remain one of the most important forms of warfare technology for almost two millennia: the catapult”(Schlager and Lauer). In a time of need, Archimedes was able to perfect a weapon of war, made of simple machines, that was able to hold the Romans at bay, and even send them back to where they came from. His courage to step up and save the city from roman invasion demonstrates his good character and selfless spirit. The trait of courage makes a hero into a strong and bold figure, but since when is that the only thing that makes a hero a hero? What about their ability to make a change? How does that impact their character? Archimedes had another significant character trait, he made big changes in the world. They might not have been what was expected, but they were important nevertheless. 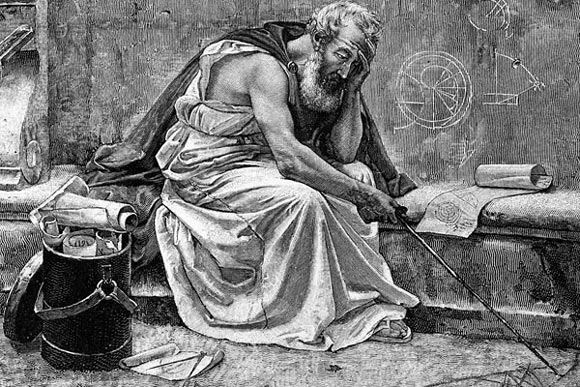 The Start of Mathematicshttps://www.famousinventors.org/archimedesThrough the expansion and elevation of mathematics and science, all done by Archimedes himself, demonstrates his instinct that ruled most of his life; to make a change in life. Even though Archimedes didn’t spend his life saving the world, or stopping an alien invasion, he still made a significant change in the world. His inventions and discoveries in mathematics helped shape the world into what it is today. “Archimedes invented the water screw, a machine for raising water to irrigate fields. Another invention was a miniature planetarium, a sphere whose motion imitated that of the earth, sun, moon, and the five other planets then known (Saturn, Jupiter, Mars, Venus, and Mercury); the model may have been kept in motion by a flow of water”(Encyclopedia of the World, Gale). My hero, Archimedes, had many different inventions, each just as practical as the last. This shows his inventive mind and creative spirit at work, as he tried to make it easier for people acquire materials and elements needed in their lives. Archimede’s duty to the people shows through his inventions, even if he wasn’t aware of it himself. His inventions weren’t the only impacts he made on the world. His mathematical findings and calculations made it easier for us today to understand the mathematical field today known as calculus. “The mathematical writings of Archimedes served to inspire the scientific revolution that would change the western world 2,000 years after Archimedes lived”(Bruno). The fact that Archimedes contributions are still alive today in mathematics shows the significance of his inspirations around the world. And in the eyes of every scientist, engineer, and physicist, his work serves to goad them on as they attempt to resolve theories and problems that they come upon in their own work. If a hero doesn’t make a change in the world, then they won’t be a true hero, because they haven’t touched the hearts of enough people to make them change their ways or their perspective of others. Having the courage to step up and do what’s right shows people that they don’t have to be afraid anymore. It also shows them that they can be courageous in their own lives, changing their perspective of themselves and overall making the world a better place. 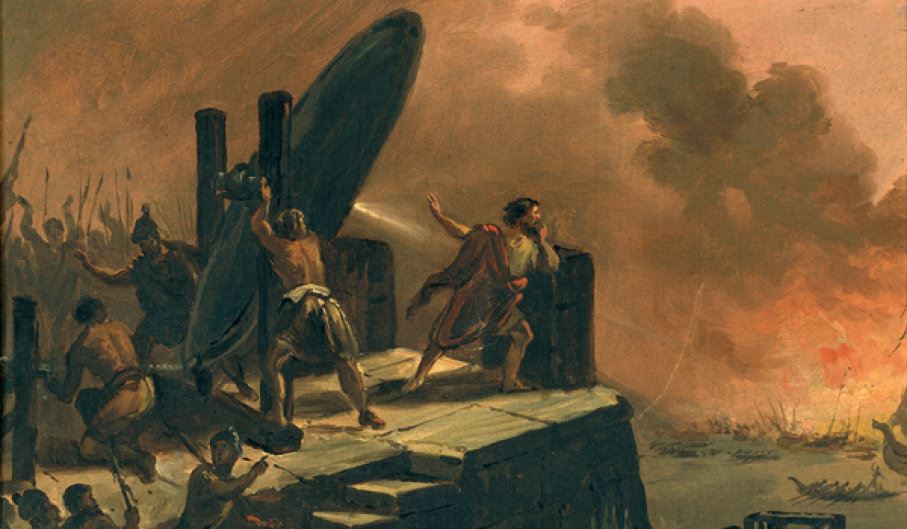 Defense of Syracusehttps://www.stuffyoushouldknow.com/podcasts/archimedes-build-death-ray.htmThrough his courageous and effective attempts to save Syracuse from foreign invaders, and his expansion and elevation of the knowledge and of science and mathematics, Archimedes represents the qualities of a true hero in Ancient Greece. All heroes need courage, it helps them to overcome the difficult events or times that they run into. Without courage, half the things that a hero does wouldn’t be possible for them to do. Courage helps heroes to rise above the norm and become an example for others to follow. And through courage, heroes make a difference in the world. They show others that they can rise above the norm, they show them that they can be better or greater than their current selves. Changing someone’s perspective can change the world. A hero needs to accomplish this in their lifetime to be a true hero. Archimedes inspires all through everything that he has accomplished, because he shows people that they can become like him, plus he turns fantasy into reality through his inventions that are centered around his timeline. For example, who would’ve thought that one man could use a bunch of rope and wood to make machines that make war into a video game, especially in the time of Ancient Greece? Archimedes is a true hero because he inspires others to go beyond the limits, to try, do, or make something that’s never been done, and make it mean something to the world. He demonstrates this through all of his writings and calculations of mathematics, because during the time, his field of profession was not considered important. More of a fine art, something like a hobby. Throughout his life he turned his field of profession into one of the most important fields of education and knowledge. As well as, his machines that he created to stop invasion. At the time, there weren’t many advantages for either side during the war, they won by basically killing everyone on the other side. When Syracuse was invaded by the Romans, one man was able to stop thousands of soldiers on multiple sides. How? He created simple, yet powerful machines able to stop a warship in its tracks. They were machines maybe thought of, but never improved or used for anything more than lifting objects. And Archimedes turned them into war machines, able to lift ships out of the water, or throw them. Sounds nearly impossible, but he did it. Archimedes is a hero because of the courage and genius qualities that he displayed over his lifetime, as well as the influence he had on the world. Courage is an essential part of being a hero. They should be willing to step up and take charge, make a change, protect and save, etc. And a hero needs to make a difference. They need to do something to the world that changes it in positive way. All the heroes that people look up to have done something that appeals to them, or shows them something that they aspire to be. They connect to that hero. And that’s the best change to make in the world.

Archimedes Home Page - In this website, you can find a lot of facts on Archimede's background and the machines he invented. As well as his discoveries and ventures in mathematics.
Archimedes of Syracuse - Read MY HERO story by Joey from Greendale