Artemisia Gentileschi was one of the most important painters of the post-Renaissance era. Although she has been grouped with "followers of Caravaggio," in some sense she followed no one. Although many women were allowed to assist in the studios of famous men--often their fathers or husbands--it was not so easy for them to become a known artist themselves. Gentileschi was the only woman of that time to consistently and successfully tackle religious and historical scenarios on canvas, rather than the less valued landscape and portrait painting, genres more acceptable for women artists. She was highly original in her interpretation and treatment of what were then common themes.

All things being equal, Gentileschi could not help but become a great painter. Her father was the artist Orazio Gentileschi, and under his early guidance and encouragement Artemisia studied and painted in his studio. By 1609, at the age of sixteen she was producing work of prodigious talent. By seventeen, she had painted one of her most famous pictures, Susanna and the Elders.

But all things were not equal, namely, the status of women in early-17th-century Rome. When the professional academies denied Artemisia access to their men-only instruction, her father had to enlist one of his assistants, Agostino Tassi, to continue her art training. Tassi proved to be an unsuitable tutor as well as a lousy person, and in 1612 Orazio Gentileschi sued Tassi for breach of contract. (He had raped Artemisia, then promised to marry her, then reneged on his promise.) During the seven-month trial, in which it came out that Tassi had had his wife murdered and tried to steal some of his employer's paintings, Artemisia was tortured to ensure that she wasn't lying about any of her claims.

Athough Artemisia's reputation was restored by the trial, Tassi only spent one year in jail and even went back to work for Orazio. Perhaps because of the great injustice she had endured, Artemisia's paintings began to exhibit an emotional power that still stands out from those of her contemporaries. Art historians have commented that Gentileschi's Madonna and Child articulates an emotional intensity in the relationship between a mother and a baby unparalleled by her male colleagues. Other artists have pointed out that her Judith Slaying Holofernes--a common religious subject--was the only one in which Judith is expressing not horror, but determination for her grim task; and interpreters suggest that this innovative characterization resulted from her anger at Agostino Tassi.

Gentileschi redeemed her life by becoming a famous, well-respected court painter. Her patrons included Charles I of England and the Medici family, and her friends Galileo Galilei and portraitist Sofonisba Anguissola. She married another artist, Pietro Antonio di Vincenzo Stiattesi, and moved to Florence. In 1616, she became an official member of the Academy of Design.

Unfortunately, this remarkable painter slipped into obscurity after her death in 1652. Only following the publication of Artemisia Gentileschi: The Image of the Female Hero in Italian Baroque Art by Mary D. Garrard, has this artist's work begun to receive recognition. 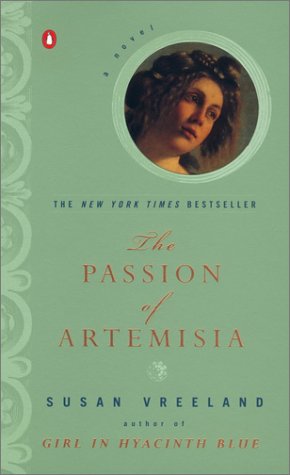 The Passion of Artemisia
Susan Vreeland