The coronavirus lockdowns offered designers a break from the non-stop hustle of the fashion world. Now, major labels are calling for a slower, more thoughtful industry that prioritizes creativity over fast-paced production.

May 26, 2020 - SOAVE, ITALY - Gucci and Saint Laurent are two of the highest profile luxury fashion houses to announce they will leave the fashion calendar behind, with its relentless four-times-a-year rhythm, shuttling cadres of fashionistas between global capitals where they squeeze shoulder-to-shoulder around runways for 15 breathless minutes. 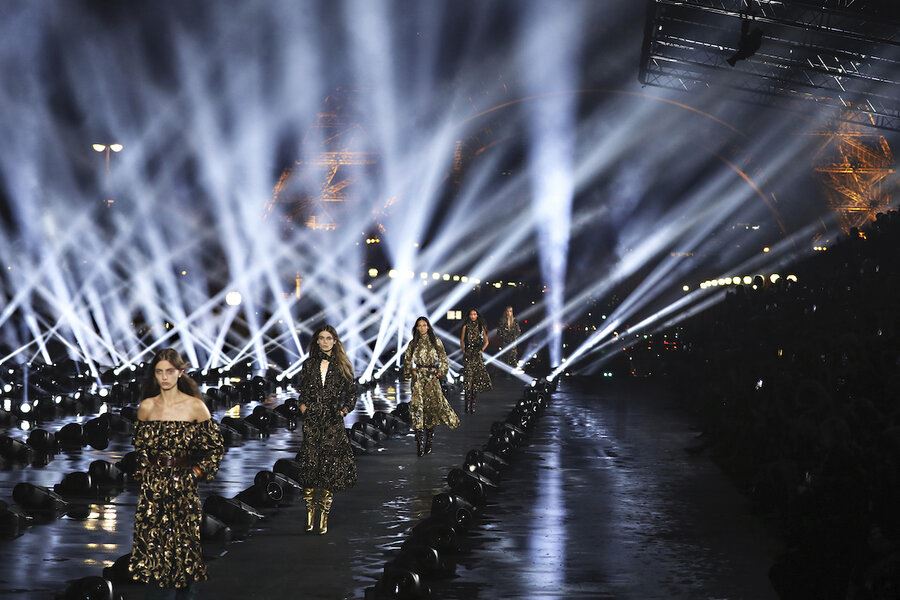 Models take to the runway in Saint Laurent’s Ready To Wear Spring-Summer 2020 collection in Paris on Sept. 24, 2019. St. Laurent and Gucci are two of the highest profile fashion houses to rethink the pace of fashion post coronavirus.Vianney Le Caer/Invision/AP

The coronavirus lockdown, which has hit luxury fashion houses on their bottom lines, has also given pause to rethink the pace of fashion, offering the possibility to return to less hectic, more considered periods of creativity and production – and perhaps consumption.

Gucci creative director Alessandro Michele imagines two yearly appointments – one in the fall and one in the spring – to present co-ed collections, getting away from the hyped-up calendar which has come to require pre-season collections before the major women’s and men’s runway shows and a one-off cruise collection, increasingly in exotic locations.

“Two appointments a year are more than enough to give time to form a creative thought, and to give more time to this system,” Mr. Michele said in a video conference Monday, expanding on an idea he launched over the weekend in a series of Instagram posts from his own lockdown diaries.

The virus-imposed shutdown – while stopping production and consumption that feed the fashion cycle – also recharged creativity among those who found new time for reflection. "It is a great gift that our planet gave us, a great gift that cannot be discarded,’’ Mr. Michele said.

Mr. Michele said he hopes that a new calendar and new rhythms would be decided within the fashion system and in cooperation with other designers.

It has been clear for the last few years that the fashion world has been suffering under the current pace: More luxury houses have been combining men’s and women’s shows as genderless and even seasonless dressing becomes a global theme; it hasn't been unheard-of for major brands to skip a season or to venture away from their fashion cities to expand their audience.

Saint Laurent hasn’t articulated its intentions, but said in a statement last month that it would “take control” of the fashion schedule “conscious of the current circumstances and its waves of radical change.”

Luxury fashion was one of the first industries to suffer from coronavirus, first with the China shutdown that closed boutiques and blocked travelers already in January from a region responsible for a third of global luxury. And the pandemic appeared in Europe just as Fall-Winter 2020-21 shows were underway in Milan and then Paris.

Illustrating just how vulnerable the show system is in the face of a fast-spreading global virus, Giorgio Armani showed his collection in a closed theater on Feb. 23 – just two days after Italy became the first Western country with a coronavirus outbreak.

Mr. Armani also has called for a major rethink of changes in luxury fashion during his 45 years as a stalwart of Milan fashion.

In a letter to Women’s Wear Daily last month, Armani said he found it “immoral” for luxury fashion to adopt the pace of fast fashion – the drive to deliver more in pursuit of profits “yet forgetting that luxury takes time, to be achieved and to be appreciated.” That has included moves toward see-now, buy-now capsule collections by some brands, running in direct opposition to his notions of “timeless elegance.”

“It makes no sense for one of my jackets or suits to live in the shop for three weeks before becoming obsolete, replaced by new goods that are not too different,” Mr. Armani said.

Mr. Armani, who opened his Milan boutiques last week as the Italian economy slowly reopens, said he would keep summer collections in stores until September – running counter to recent practice that put linen dresses in stores in winter and Alpaca coats in the summer.

The British Fashion Council and the Council of Fashion Designers of America also have endorsed resetting “the way in which we work and show our collections.” They encouraged brands “to slow down,” and reconsider how much merchandise they produce.

The Italian Fashion Chamber is promoting three days of online presentation of men’s and women’s collections in July to substitute the regular June calendar. Gucci will participate with a collection called “Epilogue,” to represent the end of an era.

When the fashion communication rebirth that Mr. Michele envisions will happen remains to be seen. He said September is too soon, while Saint Laurent only said it wouldn't participate in any previously scheduled events this year.

Fashion chamber president Carlo Capasa can’t say when live shows might return to the agenda – but he says they are irreplaceable.

“I believe that the digital experience is important, but it should be tied with a physical experience,” Mr. Capasa told AP. “Whoever has been to a fashion show knows the importance of the setting and the emotions.”

This story was reported by The Associated Press. Thomas Adamson reported from Leeds, England.

Editor’s note: As a public service, the Monitor has removed the paywall for all our coronavirus coverage. It’s free.