While it is commonly known that St. Francis of Assisi was a lover of both creation and the Creator, his role as a grassroots environmentalist is often surprisingly underplayed in biographical synopsis of his life which center mainly upon his profound journey of faith.

Decreed the Patron Saint of the Environment/ Ecology and of Animals, Francis' latter life was not only an unblemished model of religious devotion, but an exemplary paragon of harmonious existence on Earth. He was a friend to man and beast, an admirer of the sun and of nature, and a peacemaker in every sense of the word.

Francis was not merely at peace with his fellow man -- he was at peace with all living things, everything beautiful that his eyes could behold. He wrote hymns of praise to his God for the creations he felt so blessed to behold, and he wrote poems to his "Brother Sun" and "Sister Moon," even repeatedly praising his "Sister Death" upon his deathbed -- as he felt so much at one with creation that he considered the sun his brother, the moon, his sister, all men his siblings.

Francis felt compelled to reach out to the voiceless, the rejected, and the needy. He embraced and assisted lepers, whom, at the time, were outcasts of society, their skin condition causing them to be feared. He visited hospitals and cared for the sick. He sent food to thieves. He befriended women and recognized their abilities and their intelligence, a concept foreign in that time.

Yet again, his allegiance did not only lie with human beings. He was deeply committed to the well-being of the environment and of all of creation in as grass roots a fashion as has ever been seen. He lived with animals. He rejoiced amongst nature. He preached to the birds to remind them to praise their Creator for the blessings they had. He tamed a wild wolf and made it one of his many pets. Yet, he understood the plight of nature and the circle of life, albeit brutal at times. Despite, he felt that his Creator would not create evil, and hence, everything around him was good and accordingly, should be treated with courtesy and kindness and generosity, from the earthworm to the lamb, the cicada to the wolf. It is perhaps because they recognized his genuine sincerity towards their existence that the animals felt so drawn to him as well.

Simply put, Francis was a heartfelt ally to everything and everyone around him. From man to beast, from the trees to the stones, from the sun to the moon to the changing seasons - Francis was their kindred spirit. He did not call judgment on mankind for their use of the environment, be it animals for food, trees for shelter, etc. Instead, he simply urged humankind to show respect, humility, and love towards their fellow inhabitants of the earth and surroundings, and likewise, he expected the same from other creation. He felt that by embracing and rejoicing in the wonders around them, mankind would naturally then be drawn to perform acts out of love and respect rather than anger and domination.

He conversed with the universe. He spoke to his Brother Fire, his Sister Moon, with the fowl of the sky, and the beasts of the earth. Yet for as much as he lived in a spiritual realm, he was entirely human. He made no attempts to deify himself. He expected no reward for his life of service. He simply lived to serve and love in harmony.

Yet his story is that much more profound considering the sacrifices he willingly made and the lifestyle he corrected to reach this oneness with creation.

Also known as Francis Bernardone, or il Poverello, St. Francis de Assisi was born Giovanni di Bernadone, named by his mother after John the Baptist on October 4th, 1181 in Umbria, Italy. The son of a rich cloth merchant, his father changed his name to Francis because he allegedly didn't want his child named after a saint. Though blessed with popularity and riches, Francis had a tumultous youth, with bouts both as a street fighter and as a soldier, and was considered to be one of the leaders of the dissident youth of the town of Assisi. While imprisoned after a battle, he had a life-altering spiritual experience which led him to a change of heart and change of life.

Upon his release, Francis gave up all material possessions, which, having come from a very wealthy family, was a large sacrifice. His mission then forward was to follow his faith, and he recognized that in order to do so, he must first rid himself of excess, of boastfullness, of ego -- traits that tyrannize our modern times as they did Francis'.

Dressed in ragged clothes, working as a brick layer, and often begging for his sustenance to survive, yet all the while preaching peace and purity, Francis' family and old friends either beheld him with great sorrow or with great embarrasment. Many even considered him a "religious nut" and treated him poorly, not understanding the depth of his calling. His father even attempted to have him imprisoned.

The Church also saw him as a threat. He was an unconventional revolutionary of sorts. His call for poverty, simplicity, and sincere love were seen as a threat to the status quo of the day.

Yet Francis' work pressed on.

By 1209 he had attracted followers and founded the Fransiscan order of brothers. In 1221 he resigned direction of the Fransiscans, but his work and his order still continue and thrive to this day.

Towards the end of his life, Francis already a frail man, was practically blind and very ill. In 1224, two years before his death, he received the stigmata, the actual wounds of Christ upon his hands. St. Francis of Assisi died on October 4th, 1226 at the age of 44 and was Canonized (made a saint) on July 16th, 1228 by Pope Gregory IX. 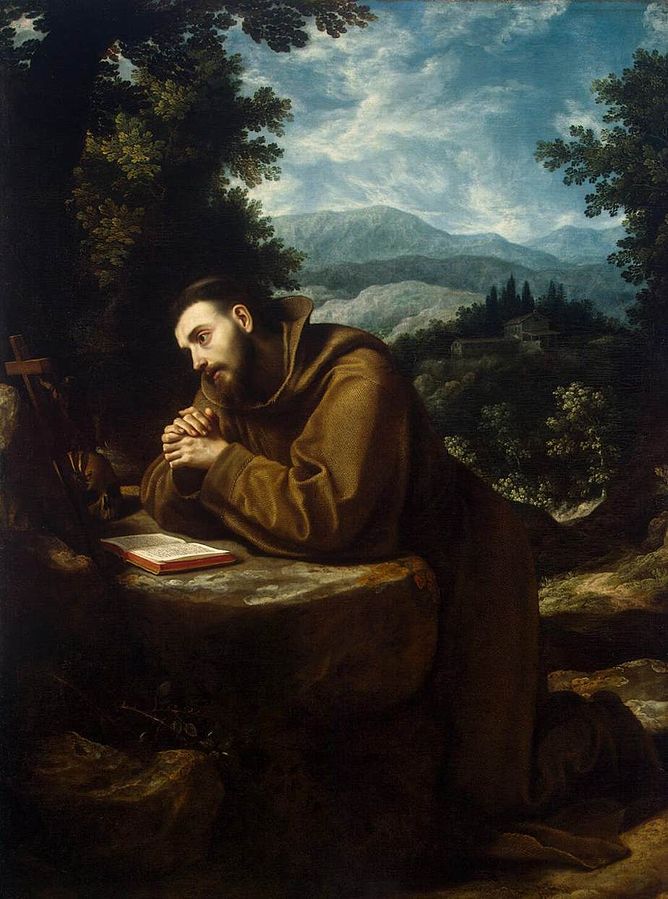 It is said that St. Francis of Assisi inspired the Italian Renaissance, one of the greatest cultural revolutions the world has ever seen. His profound love for the beauty of nature sparked Italian painters to bring naturalism again into their work. His value for humanity also roused the Renaissance's own movement towards humanism. He was an inspiration in his lifetime and to consequent eras and even cultural movements as well as to modern-day heroes.

St. Francis de Assisi followed his calling gladly and without resentment. His Earthly sacrifices were not seen as a burden to him but as a natural path towards oneness with creation and the Creator. His story is perhaps most powerful in that he was a young man with every worldly thing going for him:  his family was wealthy, his friends saw him as a fearless soldier, he was a natural leader, and he enjoyed the pleasures of the earth. Yet he sacrificed everything for his heartfelt beliefs and took it upon himself to care for all creation over his own well-being. By doing so, he gained much more -  a profound and enchanting harmony with all creation.

He is a heroic example of sacrifice, of selflessness, of humility, and likewise, a reminder of the attainability of achieving a harmonious state of peace and unity with all creation by simply exuding love.

Stories of St. Francis and the animals - -- from American Catholic. Includes other links and information as well.

"My hero is St. Francis of Assisi because he understood the connection between spirituality and the environment. He understood the way God communicates to us most forcefully is through the fishes and the birds and the trees and that it is a sin to destroy those things." - Robert F. Kennedy, Jr.