Atlanta refused to give up on homelessness. It’s working.

Sometimes trying longer, and harder, actually works. Atlanta is using new funding to alleviate homelessness, but the key is services that don’t let people fall through the cracks.

AUGUST 23, 2019 - ATLANTA - Recounting how she went from homeowner to homelessness brings Roxie to tears. 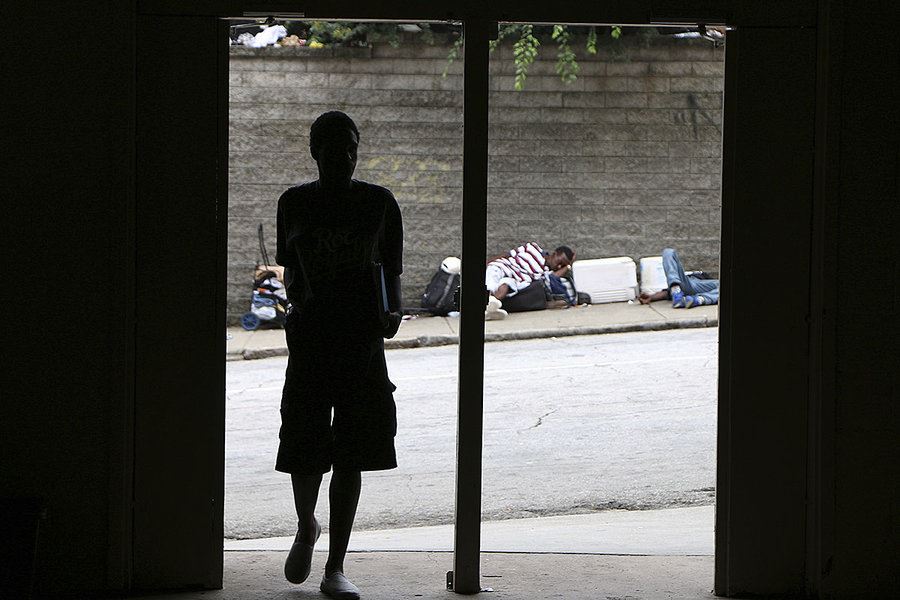 A person walks into the Peachtree-Pine homeless shelter in Atlanta in August 2017. This shelter closed that year, and the city has been launching new efforts to provide housing and services that can help people leave chronic homelessness behind.Robert Ray/AP/FileThe loss of her job, onset of a painful chronic illness, and the death of a loved one were the factors that derailed her ability to cope. Once able-bodied, and working two jobs for a decade straight, she’s an example of how several trying twists in life can land even a hard-working American without anywhere to go.

“It was like a trickle-down effect. One thing led to another,” says Roxie, who asked that her full name not be used in this story.

Thanks to a $50 million public-private partnership, launched by a group of private donors and matched by the city of Atlanta, her days and nights without a home ended for good at the end of April.

The help came from Intown Collaborative Ministries, one of three nonprofits receiving early-stage funding from the partnership this year to move more homeless people into what’s called “permanent supportive housing.” The goal is not just a home but also the wraparound support that can help rebuild wounded lives.

So, in addition to meeting weekly with a social worker, Roxie has access to three hot meals a day, regular rides to get groceries and to the park, nightly games and other activities with staff and tenants, a pool room, and more.

On one level, it’s a story of progress here in Atlanta – where the homeless population declined every year for more than a decade through 2018.  But more than that, it may be an encouraging validation of strategies which are being embraced in similar forms nationwide, even as many cities are seeing their homeless populations grow rather than shrink.

Breadth and depth of services

“Our ability to keep homelessness brief for a larger portion of our population has been a part of our success,” says Raphael Holloway, CEO of the Gateway Center, the city’s primary entry point for anyone experiencing homelessness to find supportive services. “These are necessary efforts to expand our capacity to serve.”

Samantha Batko, an expert on homelessness at the Urban Institute in Washington, says it’s hard to pin down precisely why homelessness can rise in one city and fall in another. She notes that cities like Los Angeles are implementing some of the same strategies as Atlanta, but are still seeing homelessness jump sharply – at least partly due to shortages of affordable housing.

What’s not in doubt is Atlanta’s determination and persistence.

“In Georgia there’s been a lot of work recently done on all levels of their homeless system,” Ms. Batko says. It’s been everything from help with employment to “making their shelters more housing-focused and thinking about their shelters as conduits for people back into housing.”

In all, even though this January’s annual count of Atlanta’s homeless population showed a modest rise (up 5%), it’s still down more than 25% since 2015. And those were years during which the recently expanded public-private collaboration was being built.

“We’ve distinguished ourselves among major cities in the United States with the progress that we’ve made,” says Jack Hardin, an attorney and local champion behind the private funding.

He acknowledges that big challenges remain, not least how to execute Mayor Keisha Lance Bottoms’ $1 billion pledge in June to address Atlanta’s own affordable-housing troubles in the next seven years, even as the city continues to gentrify. But Mr. Hardin sees a strong civic commitment, which he credits to Atlanta’s mix of Southern hospitality and enduring small-town work ethic.

“HouseATL is a work in progress,” he says of the local task force on affordable housing that’s been underway since last year. “But it is an example of how this community is capable of organizing and attacking in a cooperative way a major social issue. We have almost every major player at the table.”

For Roxie, the coordinated programs here mean that she had help navigating reams of bureaucratic paperwork as she moved into a permanent home. It also means access to services such as counseling, health care, and transportation. Research has shown that permanent supportive housing, by giving people a chance to restabilize their lives, can reduce the public cost of the biggest alternatives – temporarily sheltering, hospitalizing, jailing, and imprisoning homeless people.

Roxie now pays $281 a month in rent, an amount her roughly $1,000 a month disability check can reasonably cover. Recipients of permanent supportive housing can pay anywhere from nothing, if they have no income, to an amount capped at 30% of income.

“It feels like a weight has been lifted off my shoulders,” she says. “So I am extremely grateful because I feel like I’m finally on a journey of healing after all of this time.”

Atlanta’s public-private partnership dates back to a 2016 private-donor challenge to the city, calling for each side to come up with $25 million to step up help for the homeless population. One key result was a new nonprofit entity, Partners for HOME (which stands for Helping Others Move to Excellence), to coordinate the city’s efforts.

While most of the money was raised long ago from the city and donors like United Way, only this year has the pace of disbursements picked up, to put the money into action. And the final philanthropic donations are just rolling in, with an announcement of officially reaching the $50 million goal expected soon.

The public-private model isn’t unique to Atlanta. (Ms. Batko notes how Las Vegas, for example, leaned on a partnership to reduce homelessness among its military veterans in particular.)

One benefit of the approach: Private funding doesn’t come with the same sometimes hyperspecific stipulations as government funding.

“The private money fills gaps that exist, because most public grants come with very specific guidelines,” says Margaret R. Schuelke, co-CEO of Project Community Connections Inc. (PCCI), another Atlanta nonprofit. “It’s allowing us to get people into housing faster, and it’s allowing us to be more flexible to the individual needs of the households we’re serving.”

“It’s actually a requirement in the contract that the provider be as flexible as possible to make sure the families get their needs met,” says Cathryn Marchman, executive director of Partners for HOME. “We are really focused on lowering barriers and increasing flexibility ... and meeting families where they are.”

So far, nearly $15 million of the $50 million total has been invested, the majority of it toward expanding the city’s supply of permanent supportive housing. The $50 million fund is being augmented by more than $60 million in state and federal funding from sources like the Departments of Housing and Urban Development and Health and Human Services.

Along with flexibility, the nonprofits emphasize persistence. Intown Collaborative Ministries has workers who will follow up with someone for months or more to encourage even the skeptical to consider tapping their services.

Across the city, Partners for HOME hopes to house 1,000 homeless people over the next five years. That would be about a third of the city’s current homeless population, a foundation that can be built on, say advocates. The goal includes an expansion of rapid rehousing for specific at-risk groups. Some of the funds are going toward emergency housing for LGBTQ youth ages 18 to 24.

Another top priority is increasing the number of “low barrier” shelters, which typically don’t require those using them to “buy in” or sign up for expanded services.

Mr. Holloway, who heads the Gateway Center, points to how all the city’s providers of services on homelessness now use a computerized system to track bed availability citywide, in order to more rapidly get someone a place to sleep. And they use a standardized screening tool that allows them to assess the severity of an individual’s or family’s needs, to prioritize assistance.

“It feels good to finally have someone helping you, you feel like you’re not on your own,” says 21-year-old Darrius Hankerson, who moved into a subsidized housing complex in Atlanta several weeks ago with the help of PCCI. Mr. Hankerson has been homeless off and on since aging out of the foster care system at 18. His mother died when he was 9. He just landed a second job working for a catering company, which he’ll do on top of his job at a fast-food chain, one he worked while sleeping at a shelter.

I don’t have the luxury of family or friends to help me out, so I have to do this on my own,” he says. “So the fact that I can have somebody and have a support system … it’s a real blessing for me.”

Staff writer Mark Trumbull contributed to this article from Washington.