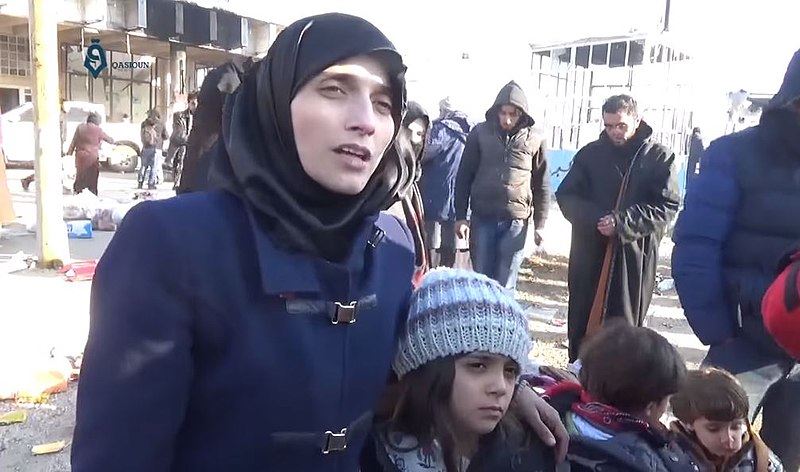 Bana and her motherWikipediaBana Alabed was not yet ten years old when a civil war broke out in Syria. She was seven when she spoke out against the sieges on Twitter and was targeted by an extremist group not long after that. She was asking for peace; she just wanted to go to school, to live without fear. She wanted her baby brothers to not be afraid of the bombs that raged their lives. Just because of wanting these things, of wanting help, she and her family had to flee to Turkey once the threats became more dangerous. She used her faith, her family, and social media to ask for help to try and make things better.

The bombs started and soon, this little girl started to tell the differences between bombs: when they were falling from the sky, how close they were, what type of explosion the bomb would give off. Bana lived in an apartment with her family, so when the bombs came, they and others all had to go to the basement and hide. It sounds a lot like what people used to do with bombs in a famous war we all know about in America. Though it may not have been us who had to hide from them in our basements.

The people who were causing the bombings are known as the "Regime," and according to Bana, they "Hate Schools." So she couldn't go to school anymore because a bomb might drop on the school; she also couldn't play outside anymore because a bomb might drop on her and her friend. Bana's mother was learning to be a lawyer and was learning English with her daughter and helping to teach her brothers, so thankfully their schooling was taken care of.

The war was causing a shortage of food, water, and power. People would have to wait in lines to fill up water jugs and take them back to their homes; Bana's father put up solar panels on top of their apartment building so that the could get power, and the complex had a garden on top to grow some food for people.

With the war waging on in Syria, she asked her mother if people outside of Syria knew about the war. They made their first Twitter post on September 24th, 2016. One sentence: "I need peace."

She began to tell the world how her best friend, Yasmin, died during one of the bombing raids, how they didn't have food or medicine. This caught the people of the world's attention and they began to message this little girl of hope and encouragement. Her Twitter page grew and people began to support the hashtag #StandWithAleppo.

Soon after planes came with messages from their government, dropping from the sky, telling people that they had to leave or they would die.  They could not leave though. Bana lived in West Aleppo and East Aleppo wasn't safe for anyone; they would take men and make them soliders even when they didn't want to be. After the leaflets came, bombs wouldn't stop falling. Then news came that Bana's neighborhood was next.

It wasn't just their neighborhood. It was their home. Their home was bombed while they were in there, Bana and her family. Thankfully no one died, but they had no home. Bana and her family moved in with her grandma, and the poor girl became heartsick. Depressed even more so than she already was. Her family did find a new place but they were running low on water and food, they had no pillows, Bana didn't have shoes, and this little girl was tired, so tired of fighting. Not too long after moving in they had to leave because of another raid; they stayed with an uncle. The army was still coming towards them though, with "Big Guns. We had nowhere to run. This was it," she wrote in her book "Dear World." And on December 16th, 2016, this brave little girl wrote out on Twitter: "Please save us now."

Someone heard them; the foreign minister of Turkey was talking to the Regime and so were people in Russia and Iran to call a cease-fire, so people could leave. While waiting for these people to come and save them, many people waited for busses by sleeping in the street. Bana and her family were cold and hungry while waiting but finally they came and she and her family were safe and on their way to Syria.

What this little girl didn't know at the time was when her mother took her to beg to get on one of the first busses, she was being targeted. The Syrian government didn't like that she was on Twitter. In my opinion, they were being cowards when they threatened a seven-year-old child to shut up about what she was saying on Twitter. They sent this child death threats and had purposefully targeted her family's home. Her mother read these threats but dared not tell her baby girl the details. Her mother had to take the SIM card out of her phone, and one year the young girl had to wear boy clothes, which she hated, but they protected her.