Bella Rasmussen makes history by believing if you set your mind to it, anything is possible

If you’ve been anywhere near a newspaper, radio, television or the internet in the last week and a half, you know the name Bella Rasmussen. On Friday, Oct. 14, she made history by achieving the first multiple-touchdown performance by a girl in California. A senior running back on the Laguna Beach High School (LBHS) Breakers varsity football team, Bella accomplished this feat during the second quarter of a 48-0 victory against Godinez at Santa Ana Valley High School.

“It’s always been one of my dreams,” said Bella, who had touchdown runs of one and four yards. According to www.CalHiSports.com, she’s the eighth girl in state history to score a touchdown on varsity.

Because of all the attention it’s getting, “I’m very happy and excited. I hope it will be an inspiration to other girls.” 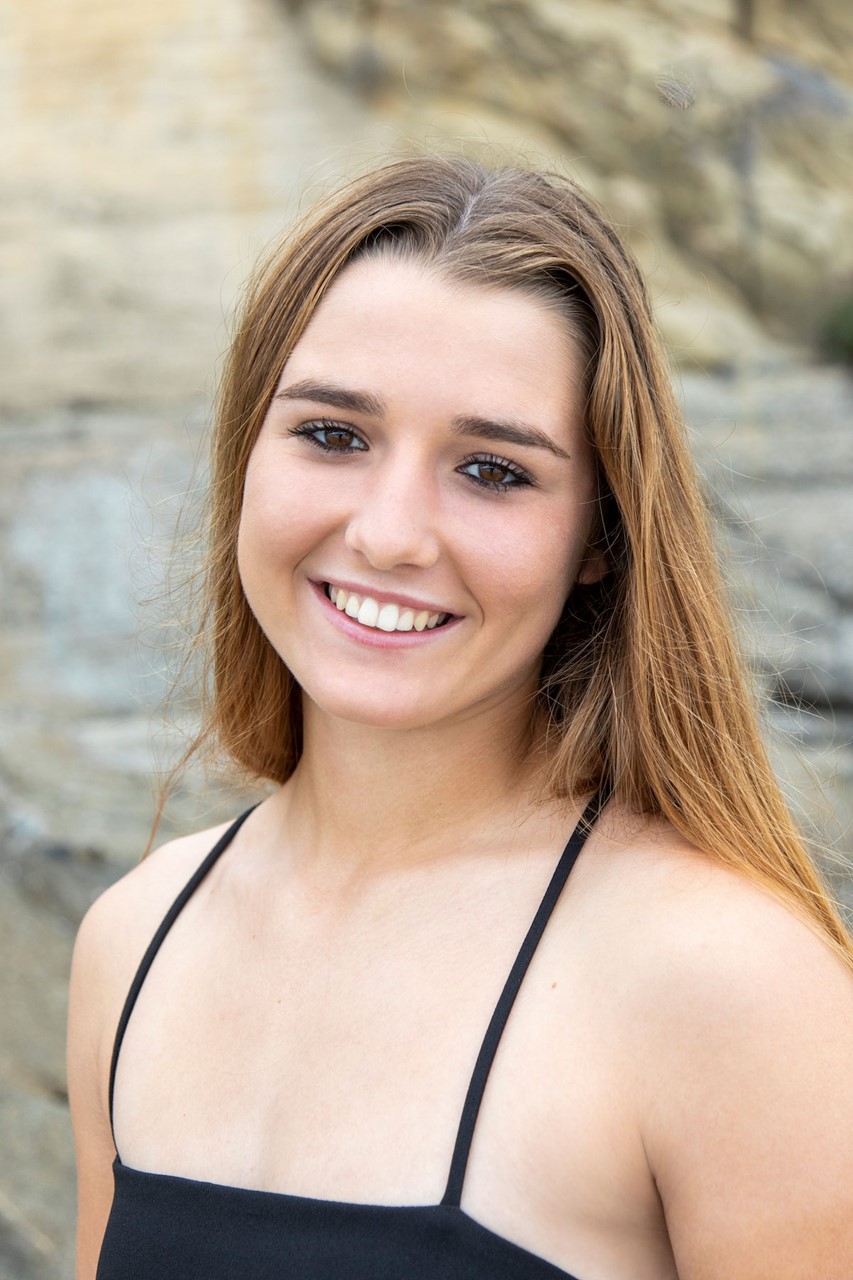 A senior at Laguna Beach High School (LBHS), 17-year-old Bella has wanted to score a varsity touchdown since she was a child and hasn’t taken that goal lightly.

“When I was 6 years old, I watched my cousin and older brother play and thought ‘I want to do that,’” Bella said.

There’s no doubt, she’s a very determined girl who knows her own mind.

She played youth football for four years in Irvine and has been a part of the LBHS team for four years as a running back and defensive end. For those eight years, she’s been the only girl on her teams.

“When I said I wanted to play, my parents were worried and asked, ‘Are you sure you want to play tackle football?’” Bella admitted, but once they realized how determined she was, they were behind her 100 percent. 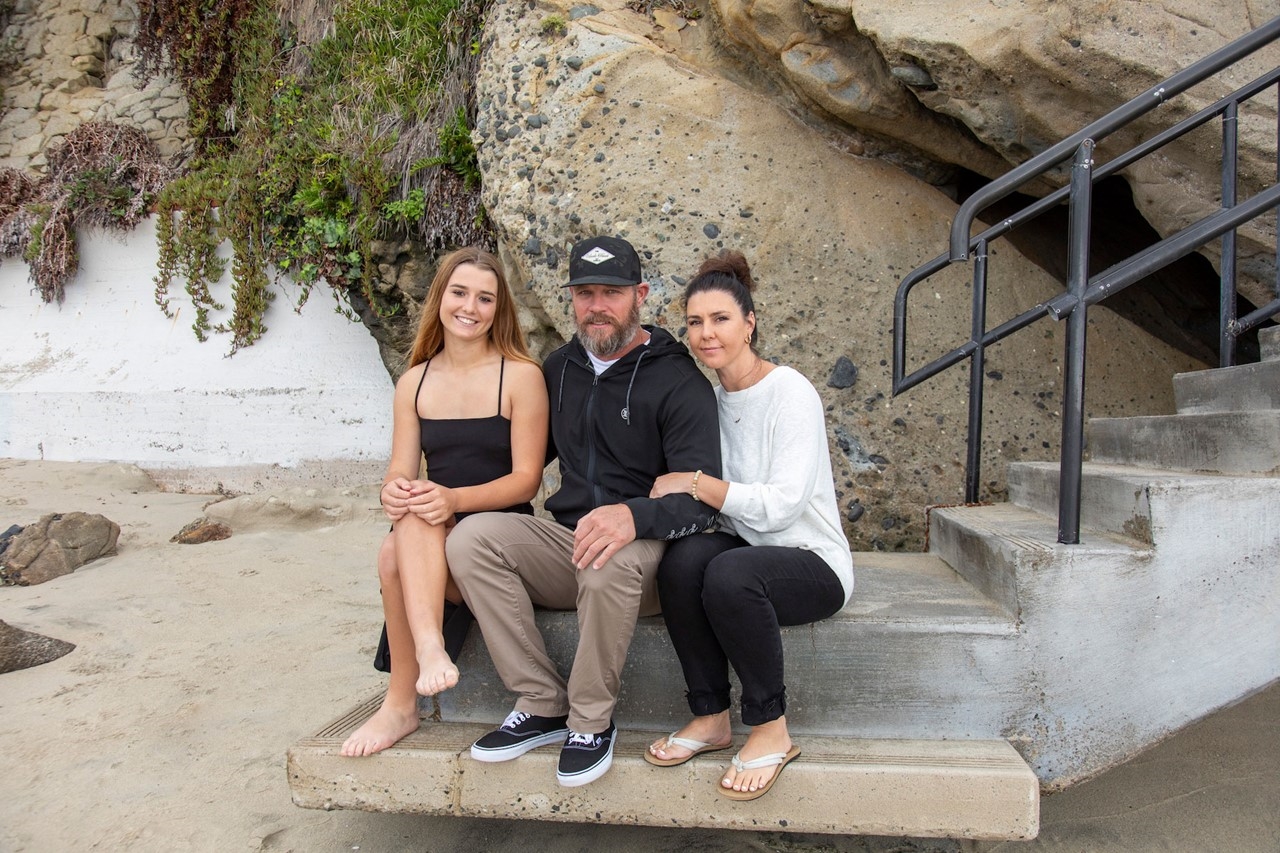 Bella, her dad Ben and her mother Annette Courtesy of Mary Hurlbut

Annette and Ben Rasmussen have raised two children who know no limits. Bella grew up believing anything was possible and to shoot for the stars.

“My parents raised me with no boundaries,” said Bella. “They said do whatever you want to and learn to overcome the challenges that go with it.”

Her older brother Seth took their parents’ advice to heart and is literally shooting for the stars – he’s studying astrophysics at the University of Boulder in Colorado and wants to go into space.

“He wants to be an astronaut,” Annette said. “After graduating with a bachelor’s degree, he’ll get a master’s degree and then a Ph.D. Japan has the leading astrophysicist program, and to up his chances of getting into their program, Seth taught himself Japanese over the summer.”

Bella clearly admires her brother and his achievements – “He’s really smart, he’s kind of a genius.”

It’s no surprise that the Rasmussen family landed in Laguna because of football, but it was for Seth’s football career, not Bella’s. At the time, she was going into eighth grade.

“We’d been living in Irvine for 10 years, but I’ve been coming to Laguna since I was a teenager, and later on, I brought the kids here,” Annette said. “It’s been my dream to live here. My sister and brother-in-law Nate Ball, who is the wide receivers coach at LBHS, moved here and said it would be good place for my son to play football.”

“I went to every one of Seth’s varsity games,” Bella said. “I was so excited. It was the coolest.”

The challenges of football

As one might expect, Bella admits that in the past, playing football as the only female on the team hasn’t been without its challenges.

“I’m not the only girl on varsity in the history of LBHS, there was one on the team in the 1990s,” she said. “I’ve never been treated differently by my coaches or teammates at LBHS. They’ve been extremely supportive and were so happy when I made the touchdowns.”

However, that hasn’t always been the case. “In youth football, overall there were definitely a few coaches who couldn’t come out and say anything, but by

their treatment, I knew they weren’t pleased I was there.”

For eight years, Bella been the only girl on her football teams

Her journey also hasn’t been without its share of injuries. “When I was a sophomore (coming back after a COVID) I broke two fingers on my right hand,” said Bella. “I didn’t tell anyone, not even my mom. It turned out that when I finally went to the doctor, two joints had separated.”

She has also suffered bone contusions in her left wrist and does acknowledge that on more than a few occasions, she’s had the wind knocked out of her.

“When I get hit, I just try to shake it off,” she said. “I think I have a high pain threshold.”

Annette added, “We have to alert the teachers at the beginning of the school year, that she’s not being abused because of all the bruises she gets in preseason. She comes in with bruises all over her arms.”

Opposing players can outweigh her by more than 60 pounds. “When I first joined, they said I didn’t weigh enough and needed to gain 25 lbs., but the coach told everyone that,” Bella said. “I’m so lucky that the program at LBHS is so incredible and I have the support of the coaches and the players. The players on the team are amazing.”

“Coach [John] Shanahan changed the whole program,” said Annette. “He is so respected and a huge part of the connection between the players and coaches. LBHS has outstanding coaches with the ultimate in class and integrity, and they support the kids off and on the field.”

In a prime example of the protectiveness Coach Shanahan displays, Bella said, “A player on another team has been texting me, and after the game I offered to take some pizza over to the other team, Coach said, ‘No, I don’t want you talking to him.’”

“The players are all very involved, especially the little running back group – Nick Rogers, Jeremy Kanter, James Golden and Davis Dix. The running backs stick together.” Bella said. “We have great support from Coach Alex Hutchison, the running back coach.”

Away from the field, Bella has three female friends and “the rest are guys,” she said. “My best friend Mia Hutcheson has been very supportive since day one. She says, ‘You’re a dude.’”

Of course, Bella has other passions besides football – Christmas, dogs and books. She maintains a 4.0 GPA and her favorite subject is English. “Right now, I’m reading How To Be A Superhero by Marina Paul (she graduated from LBHS in 2012), Twilight and In Her Boots,” she said. “I’m obsessed with Christmas and planning holidays and weddings.”

Yet her future plans might come back to football. “I may go into broadcasting. It would be a full circle moment by taking my knowledge of football into the real world.”

Bella has the strength and determination to use advice that’s been given to her regarding her chosen path, “Do what’s best for you and don’t let other people tear you down.”

Yet with the influence of social media, it’s difficult.

“On social media, there can be a million good comments, and one negative one, and that’s the one you remember,” Bella said. “I’ve built up a wall when it comes to social media.”

She hopes to be an inspiration to other girls and she’s already spoken in Newport Beach about building self-esteem. It’s possible she may speak to the Girl Scouts at El Morro Elementary.

“Society portrays girls only in light of their beauty. Self-esteem can be empowering, and I hope that by talking they can see it’s possible to be more than just a pretty face,” said Bella. “Even if they haven’t been raised in ideal circumstances, they still have a choice. Girls need to see that they don’t have to sit and take whatever comes along. They need to believe they’re strong.”

When asked about where she gets her grit and perseverance, Bella said, “My dad comes from Vikings.” Without a doubt, they were hardy people and fearless explorers, much like Bella.