by Maya Tarin from San Diego, California in United States 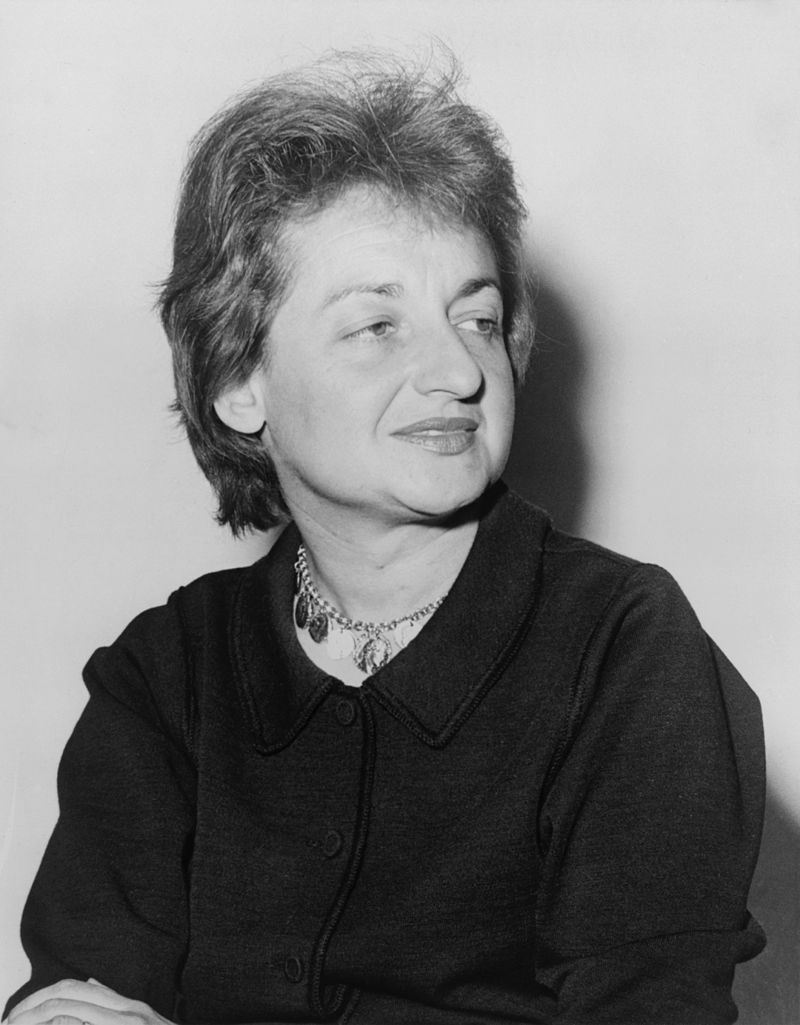 Women stereotypes in the 20th century were abhorrent until an audacious woman took a stand against it. After she got fired from her job because she was pregnant, Betty Friedan decided to devote her life to fighting for women's equality while also becoming a women's activist and famous writer. Betty Friedan was born February 4, 1921, in Peoria, Illinois. She grew up in a Jewish family and was mainly focused on her academics. In college she studied journalism but soon after she studied psychology. After college, she went back to journalism and became a newspaper editor. In 1960, she was pregnant with her second child but was fired due to the pregnancy. Friedan started interviewing housewives about the reality of their lives. This led her to create her book the Feminine Mystique. Her book introduced the harsh reality of women stereotypes. As such, Betty Friedan demonstrated traits that were heroic. She pushed woman and equalists to take a stand against their struggles which helped her create many organizations to help with these stereotypes. Betty Friedan possesses valor and perseverance; therefore, she is a hero. She not only helped other people, but she also changed the world.

Betty Friedan possess valorous characteristics. She did what she thought was right even though there were many obstacles throughout her journey. Other than changing the stereotypes for women's reality, she also created many organizations that helped changed the world, including an organization called NOW. “At the annual meeting of NOW, she called for a Women's Strike for Equality, which was held on August 26--the 50th anniversary of the day women gained the right to vote. Women across the country commemorated the day with demonstrations, marches, and speeches in 40 major cities. Friedan led a parade of over 10,000 down Fifth Avenue in New York City” ("Betty Friedan." Encyclopedia). During this time, since women's equality was underrated, she took a risk despite all the negativity that still surrounded her. She showed leadership and was valorous while leading her peers through a courageous journey. Knowing the sacrifices, she still did brave things such as putting her thoughts and opinions in her famous book The Feminine Mystique for the public to read, knowing that there would be irrational comments. “The Feminine Mystique created a furor after it became an instant best-seller. In its pages, Friedan raises issues, not only of women's identity, but of the masculine identity as well. Men, she insists, are far from being the enemy; they are trapped by a masculine role that they have to play in order to be accepted by society, just as women are trapped in the feminine domestic roles. The book sparked discussions between men and women all over America who debated, attacked, and denounced its contents. The Friedan's were exiled from suburbia and moved back to the city” ( "Betty Friedan: Overview.") Betty Friedan took a risk by publishing her book, and although she faced many hardships, she still believed in what was right and took multiple stands. Instead of being biased to only women, she wrote that both men and women should have equal rights, and she declared that there shouldn't be gender roles in society. Though there were many risks throughout her journey, she stayed true to herself and exhibited valorous traits.

From the documentary directed by Mary More

Betty Friedan also showed characteristics of perseverance. She was brought down by many people but she always found a way to achieve the goals she had. Instead of just sticking to writing, she decided to do bigger things. While she was reaching her goals, she not only helped many people, but she also changed the world. “Friedan soon realized that her activism could not be kept to writing and speaking alone; it took a new form after her organizational talents resurfaced in 1966 and she helped found the National Organization for Women (NOW). Friedan wrote the new organization's statement of purpose and was elected as NOW's first president” ("Betty Friedan: Overview.") Betty Friedan didn’t think that just writing about her thoughts was enough, so she did bigger things to help change her reality. She is a true activist and did things that most people wouldn’t do. The National Organization of Women was one of Betty’s ways to help women in her society. Discrimination played a big role in her life. Even after college, she still was discriminated against. “With NOW's members behind her, Friedan fought against discriminatory practices by, for example, staging a sit-in at a restaurant catering to an exclusively male clientele. After such extreme measures gained popular attention, laws started to change. Friedan progressed to other avenues, offering criticism on the way women were depicted as sex objects on television programming. As she worked on one issue, others surfaced: employment equality, wage discrimination, racial discrimination” ("Betty Friedan: Overview.") She dedicated her life to bettering the equality between men and women. Betty Friedan made her goal to help people because of the struggles she went through. She dedicated her life to it and did her best to help her reality.

Throughout her life, she possessed valor and perseverance, which helped her become a heroic figure, and through this she helped people and changed the world. She was a feminist, activist, and a passionate writer who gave her opinion to the world knowing there would be risks. Betty Friedan is a true hero because she did what was right and what was true to her no matter what anyone said about it. She believed in equality and was caring to others. Betty Friedan changed the lives of everyone who lived beyond her years and is the reason for one of the greatest changes in humanity.

NOW - National Organization for Women - NOW was co-founded by Betty Friedan. Mission: "Since our founding in 1966, NOW’s purpose is to take action through intersectional grassroots activism to promote feminist ideals, lead societal change, eliminate discrimination, and achieve and protect the equal rights of all women and girls in all aspects of social, political, and economic life."
National Women's History Museum Website | Betty Friedan Bio - The NWHM's mission is to tell the stories of the women that transformed the United States. It is one of the largest online cultural institutions dedicated to US women’s history.