by Luke from Montvale, New Jersey in United States 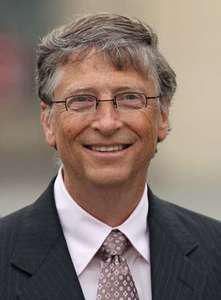 Bill GatesEncyclopedia Britannica Bill Gates is a hero to the world. He is rich but what he does with his money is what matters. He donates 75% of his money and still has a lot of it! His accomplishments are incredible!

Bill Gates always loved technology as a kid and he is very smart and is generous too. Bill Gates was born on October 28, 1965 in Seattle, Washington. He has two sisters Kristy (older) and Libby (younger). He was very smart; he even started to write software at age 13! As a kid he really liked to do things with computers. But he didn't always use computers as he even did Boy Scouts as a kid. Also, he went to Harvard. But . . .  as a junior he dropped out and still continued to work on computers. Next, he married a person named Melinda and they now have a son and two daughters Rory, Phoebe, and Jennifer. Can you imagine this person made Microsoft? This hero started strong before Microsoft and created Windows 95. He kept working and working until he finally finished and he called it Windows.

This hero is the creator of Microsoft. Bill owns 40% of Microsoft's stock (profit).  In the mid 1990s he became the richest person in the world at age 39. Mr. Gates donates a lot of money. He donated $30 Billion and he is still so rich! This hero donated 75% of his money and currently, Bill Gates is the second richest in the world behind Jeff Bezos - he is the founder of Amazon. The Microsoft creator donated $30 Billion to his own charity called the Bill and Melinda Foundation. In 2016, Bill was awarded the Presidential Medal of Freedom. This person is a hero because he donates.

Now you have learned about Bill’s background and accomplishments and what he did to change the world. He uses his money for a good cause.