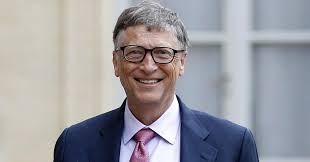 Bill Gateshttps://www.cnbc.com/2017/12/11/why-bill-gates-says-he-sees-himself-in-comedian-eddie-izzard.html      “Life is not fair; get used to it.”- Bill Gates. This shows that Bill Gates is a leader because he shows people that they have to work for what they want.  Bill Gates is my personal hero. On October 28, 1955, William Henry Gates III was born to William H. Gates Sr. and Mary Maxwell Gates. Throughout his childhood, Bill was fascinated by computers. One time at his school he got banned from computers because he found a glitch that allowed him to have as much computer time as he wanted. After this though, Bill and a couple of his friends agreed to report glitches for extra computer time. Bill Gates got married to Melinda French on January 1st, 1994. I think there are three main characteristics for why Bill Gates is a hero, and those three characteristics are leadership, generosity, and hard working.