by Christian Lee from Montvale, New Jersey in United States 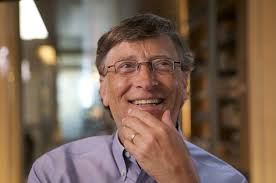 Bill Gates is one of the richest men in the world and really generous. He is a real hero. For example, he has a great background and also has wonderful accomplishments. He donated money to his foundation which made him a hero. You are about to find out how he really saved the day.

One reason why Bill Gates is a hero is because he had a great childhood and a great background. First, William Henry Gates was born on October 28, 1955 in Seattle, Washington. In school, he was often bored. In college, he went to Harvard University. But when he was 20 years old, he dropped out of college. Next, he started a company called Microsoft with his friend Paul Allen. Then, he married Melinda Gates. After making the company Microsoft, he was on his way to becoming a billionaire.

One more reason he is a hero is because he has many amazing accomplishments in his life. For example, he kept on making so much money that he became one of the richest men in the world! Ever since he was rich, Bill and Melinda Gates started their own foundation. The foundation was to support the people who need food, water, clothes, medicine and much more. Finally, Bill donated $28 billion to the foundation. What a considerate person! He is really kind for donating that much money. He is the hero.

In conclusion, he saved people's lives and became famous. That is how he rescued many people from his nice background and amazing accomplishments. I learned many things  from Bill Gates’ experience. I hope you did too!