SEPTEMBER 10, 2018 - PORTSMOUTH, N.H. - Valerie Cunningham is a truth-teller. She’s known for busting myths by bringing hidden stories of African Americans to life – stories that can help shape a better understanding of the nation’s early chapters. 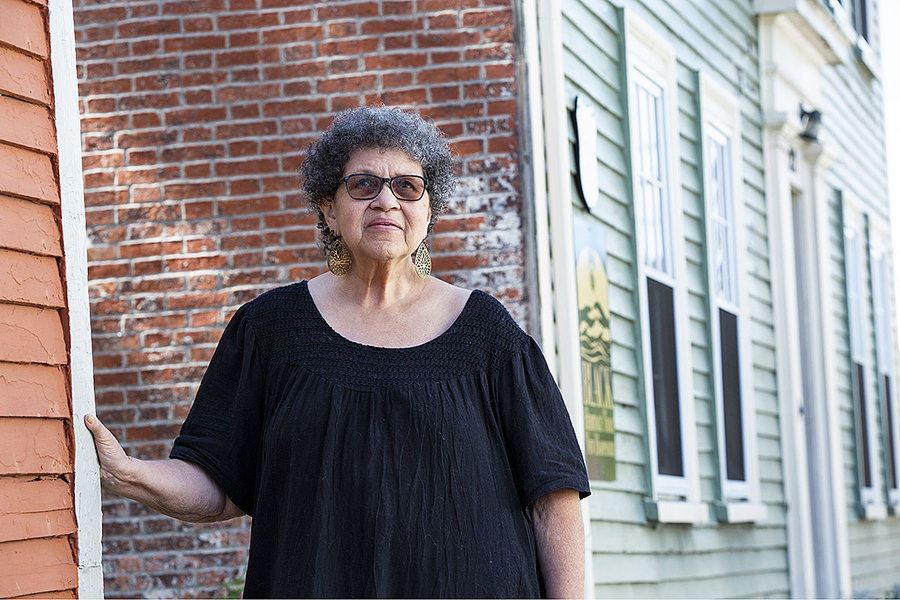 Valerie Cunningham stands outside the Portsmouth headquarters for the Black Heritage Trail of New Hampshire on Sept. 5, 2019. The building was the parsonage for what is now St. John’s Episcopal Church, where the Rev. Arthur Browne enslaved two black men in the 18th century.Melanie Stetson Freeman/StaffThrough decades of digging alone in church basements, archives, and courthouses, Ms. Cunningham laid the foundation for the Portsmouth Black Heritage Trail, which turns 25 next year and includes a large memorial for the 18th-century African Burying Ground. By the 1800s, the burial site had been built over and forgotten, but now visitors to this seacoast city can find it alongside a residential block and pause to contemplate the striking sculpture of an African woman and man who stand back to back against a granite slab, their hands almost touching. And when tourists walk by famous mansions of white historical figures, they also see plaques about the black men and women who labored behind the scenes.

On a recent Saturday guided tour, Mary DeSalvo, a white retired teacher, says she spent summers in New Hampshire for years and “did not think that there were slaves up here” until she heard about the African Burying Ground. Without the context offered by the trail, Portsmouth would have only “a celebration of what white people have done,” she says.

Making black history visible is a means to a bigger end for Ms. Cunningham. What motivates her research is a deep yearning to help people “become critical thinkers ... to learn what the history is and try to understand how it connects to what’s happening now. ... History isn’t over,” she says.

That critical thinking keeps growing as more residents and visitors encounter black history that instantly changes their perceptions about New England, says JerriAnne Boggis, executive director of the Black Heritage Trail of New Hampshire, a nonprofit that she and Ms. Cunningham helped establish to handle the growing interest in recovered stories and sites.

“The mythology of New England is, slavery was never a part of the North,” Ms. Boggis says. So to hear about enslaved individuals “asks you to rethink your history. Once you start that questioning, you start seeing people more as humans than as stereotypes.” In the current climate, she adds, “where racism seems to have raised its ugly head back into our consciousness,” many people on trail tours “want to know, ‘Why wasn’t this part of our school teaching?’” 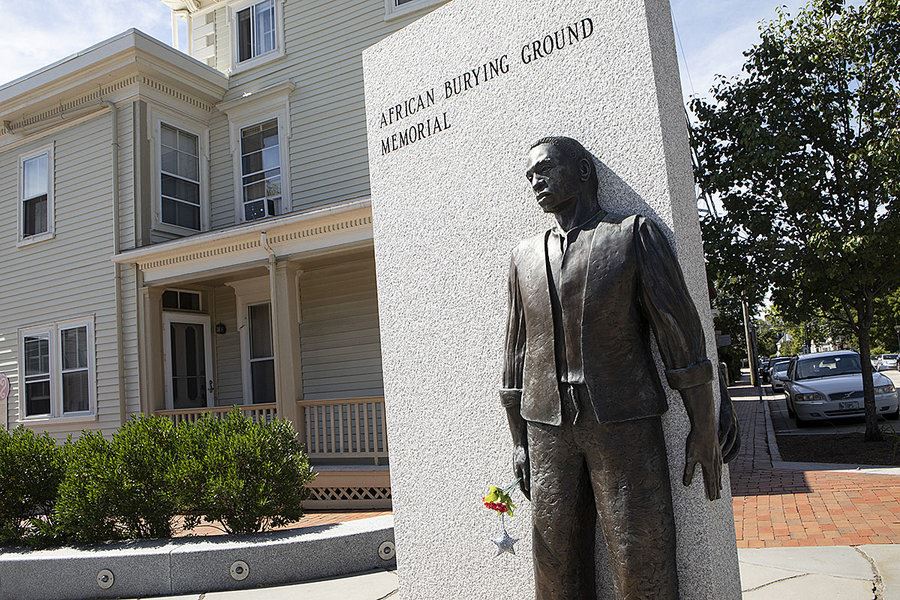 The African Burying Ground Memorial is a stop along the Portsmouth Black Heritage Trail. Visitors can tour the trail on foot or by trolley.Melanie Stetson Freeman/StaffMs. Cunningham’s civil rights work has extended from marching with Martin Luther King Jr. in Boston to making her home state of New Hampshire more inclusive. She joined with others to push for a holiday honoring King here, the last state to do so. This year, she was on hand when the state officially recognized Juneteenth as a day to reflect on slavery.

Throughout her life, Ms. Cunningham has shown a warmth and humility, exercising a quiet type of leadership through smiles and sincerity but also a dogged persuasiveness, people who know her say.

“It’s a moral authority, but it’s also born of all that she has learned,” says Angela Matthews, who met Ms. Cunningham at a community foundation in 1993 and has seen her transform from a shy woman to “an advocate for this lost history ... and human dignity, and making New Hampshire the best possible place to live for all people.”

A curious listener and persistent questioner

It wasn’t just white people who held stereotypes about slavery. As a high school student working at the local library, she picked up the 1859 book “Rambles About Portsmouth,” and found mentions of enslaved Africans in the city’s history. But when she asked black adults about this, she says the response often would be, “Yeah, but it wasn’t really slavery in the North. It was more like indentured servants.”

Not satisfied, she continued probing, scouring local records for clues about people who’d been left out by historians who didn’t see their value.

One day Ms. Cunningham asked for the Colonial records at St. John’s Episcopal Church, a commanding brick building here on the site of an earlier church known as Queen’s Chapel. She found in those pages “Venus” – a poor black woman who’d been given a dollar from the church fund. The tidbits were “enough to make me keep looking,” she says.

After she published some of her findings, a community foundation (the one where she met Ms. Matthews) appointed her to a diversity committee in the early 1990s. At one of its meetings, she showed slides of famous places around town. “They knew the white story of what I was showing them. And I said, ‘OK, here’s what I know about it.’”

She told them about people like Prince Whipple, the enslaved servant of Portsmouth’s William Whipple, who signed the Declaration of Independence. Along with 19 other enslaved Africans, Prince petitioned the New Hampshire legislature for freedom in 1779. They were denied, but the example of men who were erudite, even using satire, punctures the pervasive view that slaves were illiterate, Ms. Boggis says.

Impressed and intrigued, the foundation funded Ms. Cunningham to work with historian Mark J. Sammons on a curriculum guide for local schools. The guide expanded later into a book, and also became the basis for the large bronze plaques put up around town to form the heritage trail.

Around 1996, local history writer J. Dennis Robinson asked Ms. Cunningham if he could publicize her work through a new thing called a website. She was suspicious.

“I didn’t know who this white guy was,” she says with a laugh, “and you know, we have a history of white people taking our stuff and capitalizing on it.”

He promised to credit her whenever he wrote about her material, so she agreed. “He’s a wonderful storyteller,” she says.

Her research on black lives “knocked me out,” Mr. Robinson says. At that time, “it was all these historic houses that we had, but there was zero black history. And very little women’s history. No immigrant history. Just the guy that lived in the house.”

Ivy League scholars started emailing Mr. Robinson to ask how they could get in touch with Ms. Cunningham. She inspired people from as far away as New Zealand to set up their own heritage tours, he says.

“She provided me with a kind of X-ray vision in which I can’t look at a building or read a book without wondering what the rest of the story is. ... I’m always thinking, ‘What would Valerie think?’”

He’s far from the only one who’s followed Ms. Cunningham’s lead.

“A lot of people say, ‘Whatever Valerie says is what we’re going to do,’” says Ms. Matthews, who is also a board member for the Black Heritage Trail of New Hampshire.

Ms. Cunningham’s influence has made the state feel more inclusive. For African Americans, who make up less than 2% of the population, it’s encouraging “to know that people of color weren’t just walking through the state to Canada ... but were part of the cultural fabric, the civic fabric” as residents, both enslaved and free, Ms. Boggis says.

The trail creates “a sense of belonging ... [and] there would be no trail without Valerie Cunningham,” says Dennis Britton, an African American professor of English at the University of New Hampshire who also serves on the nonprofit’s board.

Ms. Cunningham recently stopped giving tours herself, but she’s still researching state civil rights figures. Of the heritage trails’ success, she says, “It’s a thrill to know that this history, these voices who have been silenced for so long ... now somebody wants to hear what they have to say.”