Black Native Americans were largely erased from US history

“We Refuse to Forget” explores the situation of Black members of the Creek Nation in the 1800s, and their descendants in the 20th century. 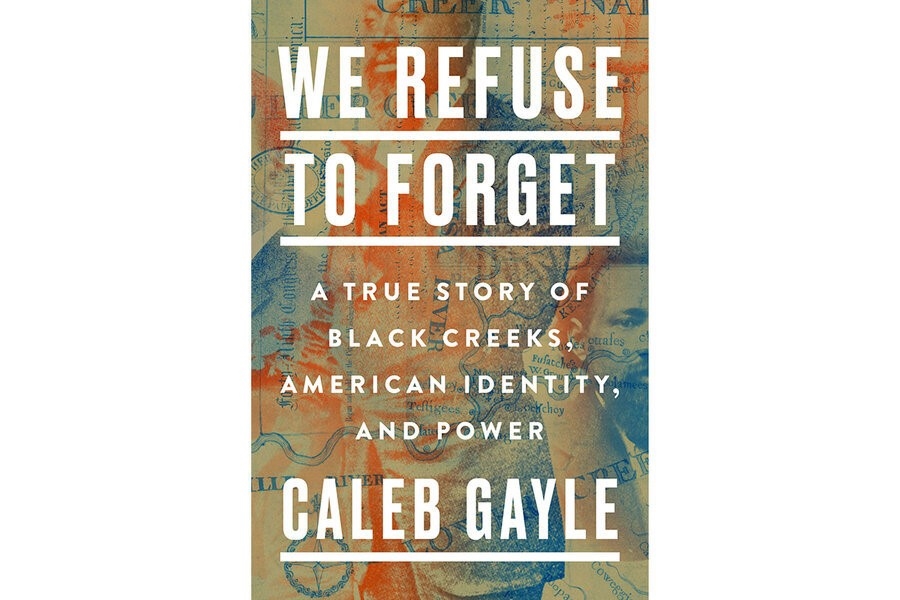 At the conclusion of the United States Civil War in 1865, Union General William Tecumseh Sherman signed an order dividing confiscated Confederate land – which itself had been confiscated from its Indigenous inhabitants – into plots intended for formerly enslaved people. This agreement became known by the famous phrase, “40 acres and a mule.” After President Abraham Lincoln’s assassination, however, his successor, Andrew Johnson, reversed the order, restoring the land to its Confederate owners.

In his eye-opening new book, “We Refuse to Forget: A True Story of Black Creeks, American Identity, and Power,” Caleb Gayle traces the fascinating and largely forgotten history of Black members of the Creek Nation, who were able to acquire land from the government.

Addressing the reader directly, Gayle references the erasure of Black Native identity from the face of contemporary history, writing, “It is puzzling for you to hear today of people who were both Black and Indian.” He adds that being “both fully Creek and fully Black seems nearly impossible,” even “contradictory.” Contact between the Creek Nation and Africans, he explains, likely began with Spanish conquistador Hernando de Soto’s brutal 16th-century expedition to North America. Some of the enslaved Africans the conquistador brought with him escaped and sought refuge with Native tribes.

The Creek Nation also enslaved people, but unlike white Europeans in North America, they did not employ a system of chattel slavery, in which the enslaved and their offspring were permanently held as property. Their system was more “fluid and dynamic,” Gayle writes. People of any race could be enslaved, and slavery was not considered a perpetual state. Enslaved people could transition out by marrying into the tribe, for instance, in which case they would be accepted as full citizens.

Gayle, a journalist and journalism professor at Northeastern University, tells of how one 19th-century Black Creek citizen, Cow Tom, served as an interpreter and negotiator, playing “a special role in bridging the gap between the Creek world and that of the ever-growing world of this newer, whiter America.” Cow Tom survived the forced relocation of the Trail of Tears, eventually settling with the tribe in present-day Oklahoma. He became a leader of the Creek people and in 1866 negotiated a treaty with the U.S. government that guaranteed citizenship rights for all Black people in the tribe. At that time, Gayle reports, there were roughly 1,600 free Black Creek persons in a nation of 13,500 (many had perished during the catastrophic westward journey).

Throughout American history, the U.S. government’s policies toward Native Americans have been calamitous. The 1887 passage of the Dawes Act divided communally held Native lands among tribe members in an effort to encourage individual farming and with it, assimilation to capitalist ways. The Act also authorized the government to determine who was Native American using “blood quantum” standards – that is, assessing what it called  “Indian-ness” based on the fraction of “Indian blood” a tribe member possessed. The Dawes Rolls, used to distribute allotments of land and money to individuals, listed all tribal members. It categorized Black Indigenous people separately on the Dawes Freedmen Roll (a misleading designation as not all Black Native Americans had been enslaved).

These separate rolls eventually became the basis for tribes to exclude Black members from citizenship. In 1979, the Creek tribe did just that, adopting a new constitution that tied membership to blood quantum. Gayle views this development as a triumph of white supremacy: “getting those on the margins to adopt the very segregatory habits and practices they once bucked against.” The second part of “We Refuse to Forget” details an ongoing lawsuit by several descendants of Cow Tom to restore their Creek citizenship. The plaintiffs, who understand themselves as both Black and Creek, yearn to restore their histories and their identities.

The book is at times repetitive and too often jumps between different periods and subjects. But Gayle tells a rich story with feeling and insight. He also makes it personal and timely. The author was born to Jamaican parents in New York City but raised in Oklahoma. Like his subjects, he says his identity contains multitudes. All do, he insists: “We are all beautifully complex, and there’s nothing more American than struggling to fit all that complexity into boxes you did not create in the first place.”

Toward the end, Gayle reflects on how the prosperous descendants of Cow Tom, who inherited the land their ancestor gained through tribal membership, helped him understand “the moral imperative of reparations.” He writes that being Black and Creek “created opportunities when so many other Black Americans had limited chances for success” and imagines how Black life in America might have evolved differently if formerly enslaved people had also received land they could have passed down to their descendants.