Boxing and talking: How a 1988 Olympian gives back 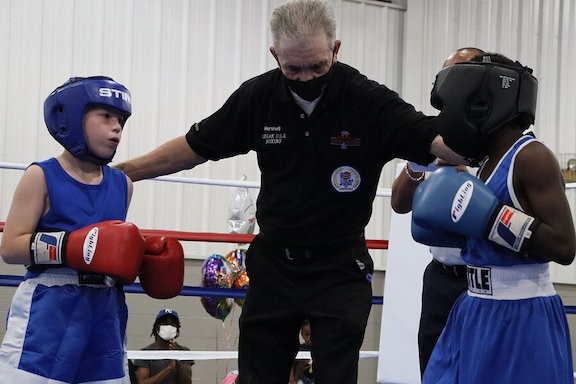 Jarmani Taylor (right) faces off with a competitor in the Arthur Flash Johnson Invitational on Oct. 9 at the Sunshine Cultural Arts Center in East St. Louis, Illinois.Amicia Ramsey

Amateur boxer Kevin Hill remembers when his mother begged high school administrators to give her son a second chance after he’d gotten kicked out of three different high schools for fighting. They did. He graduated from East St. Louis Senior High School in 2007, an accomplishment he doesn’t take lightly.

Mr. Hill recalls experiencing chronic homelessness while growing up, and losing friends and family to street violence or drug-related crimes. He dealt with it all by fighting.

“I wasn’t friendly,” he reflects. “I would have an attitude, … and that would stir a fight up.” Today, Mr. Hill is still fighting, but he’s not getting in trouble for it. He spends his days at the Flash Boxing and Activity Center, a haven for children and young adults in East St. Louis. Despite finding a coach in Arthur “Flash” Johnson later in life, Mr. Hill still has an opportunity to turn pro. 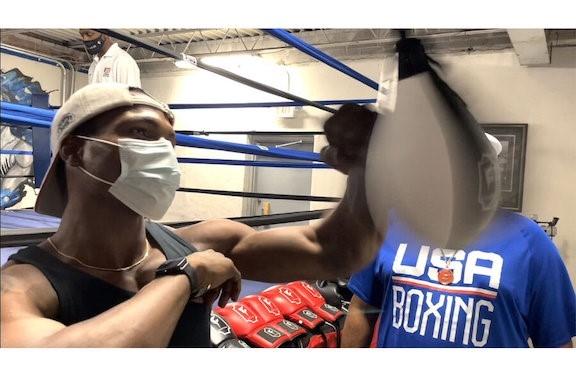 Amicia RamseyAmateur boxer Kevin Hill hits the speed bag at the Flash Boxing and Activity Center as a volunteer coach from the center watches.

Mr. Johnson, who holds both amateur and professional world titles and competed in the 1988 Olympics in Seoul, South Korea, is the founder of the activity center. He also co-founded the Arthur Johnson Foundation with his wife, Latonya Johnson, in 2001 to give back to the community and serve youth through boxing and mentoring programs.

In a high-poverty, high-crime area, where fighting is a frequent response to adversity, Mr. Johnson works to redirect that impulse into the sport of boxing and to nurture the discipline and respect needed to succeed not only in the ring, but also at school, on the job, and in the community.

“You could’ve had a lot of bad things happen to you in your life,” he says. “But at the end of the day, when you reach a certain age, life expects you to make better choices.”

From competing to coaching

After retiring from boxing in 2003 and later overcoming a disease he was told would kill him, Mr. Johnson developed a heart for coaching athletes. That’s the most obvious thing he focuses on at the activity center, which was built in 2017 following years of effort. “You have to keep knocking when the doors are closed, even if they say go to the next door and the next,” he says.

This year, after rebounding from the worst of the pandemic, the center has 40 children and young adults registered, about 85% of whom are under 18. Boys and girls can begin as young as 8. Mr. Johnson also trains men and women who want to pursue boxing careers.

Boxing is “going to demand you to be disciplined,” Mr. Johnson says, pointing out the importance of developing character – the less obvious focus of both the foundation and the center.

Alongside the coaching, a mentoring program is designed to instill values and nurture character growth. “Twice a month we get the guys in the gym, and we go to the conference room. We have a roundtable talk,” says Earnest Rice-Bey, a volunteer coach who grew up in the neighborhood. Boxing was Mr. Rice-Bey’s first love, but the streets pulled him away from it, resulting in three stints in prison, he says, before he turned his life around. “I try to mentor to that toughness,” he explains. “I know what it is like because I was there. I see it in them.” 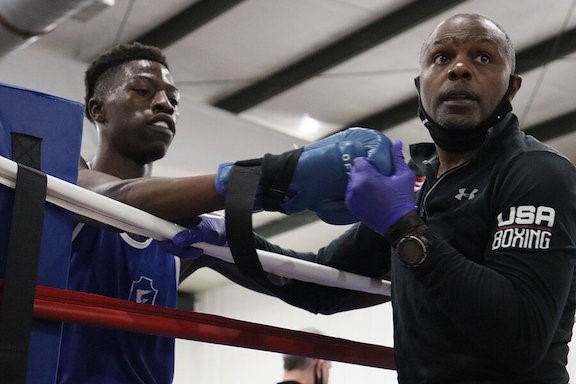 Amicia RamseyArthur Johnson, founder of the Flash Boxing and Activity Center, adjusts the gloves of Jamal Simmons at the Arthur Flash Johnson Invitational held in October.

Nothing is off-limits during the roundtable discussions.“I had trust issues at first,” says Mr. Hill, who was a young child when his father was shot and killed at just 21 years old. From that day forward, Mr. Hill explains, his only ambition was to stay alive longer than his father. Although he’s exceeded that life expectancy, it can be hard to see beyond the violence and scarcity prevalent in his environment. Mr. Hill isn’t the only one to have experiences and feelings like these come up in the roundtables. It’s where everyone comes to lay down their burdens. Then, in the ring, they can tap into their potential.

“It has to be your life”

“Coach is going to give you all the tools, and you have to work with them,” says Carlton Richardson, a 2016 Ringside World Champion.

Mr. Richardson was 16 years old when Coach Johnson spotted him at an after-school program. “There were so many other kids in the gym, and he saw something in me,” says Mr. Richardson, who had never stepped inside a boxing ring. Mr. Johnson invited him to try the sport – and that was all it took. “I developed a passion for it,” he says.

For about six months, he trained with Coach Johnson. “It was hard at first. It’s mental,” explains Mr. Richardson. He changed his diet and sleeping habits and spent countless hours in the gym. “It has to be your life,” he adds.

Then came his first competition: the Ringside World Championship, a four-day tournament in Independence, Missouri, with more than 1,500 boxers from around the world. Mr. Richardson says he took home the super heavyweight title for his division by outworking his opponent. He would go on to four more competitions and earn the rank of third in the nation that year. Now 21 years old, Mr. Richardson works full time, but he applies his accomplishments in the ring to everyday life. “It taught me how to face a lot of fears, like being comfortable in uncomfortable situations,” he says.

Off the streets and into the ring

Poverty and crime are common threads in the lives of many of the athletes who come to the center. A 2019 survey from the U.S. Census Bureau shows the poverty rate of East St. Louis is just over 33%, which is three times the national average. That same year, East St. Louis ranked as one of the most dangerous cities in the U.S., according to FBI data.

Lawrence Wise is an East St. Louis Park District police officer and a native of the city. For three decades, he’s seen how young men and women faced with adversity make poor decisions that lead to crime and jail. He says a lot of the youth he encounters have pent-up emotions that are ready to explode. That’s where Mr. Johnson’s activity center can help, he adds.

“He is taking some of the anger out of them by teaching and instilling boxing skills. The students learn self-respect,” says Captain Wise. Recalling the mentors who taught him how to value himself, he says the youth who join the boxing club get that same support. “They have potential to be great and can go on to be the person [Mr. Johnson] sees them to be,” explains Captain Wise.

Mr. Johnson knows firsthand the struggles of those he coaches. He describes growing up in public housing in East St. Louis and being raised by Estella Johnson, a single mother with 10 children who struggled to make ends meet. “She was a Wonder Woman and definitely one of my heroes,” he says.  At the age of 11, he forged his mother’s signature on a permission slip to attend a boxing camp hosted by two men in the neighborhood. They were his first male mentors. Mr. Johnson tells his athletes how the grace of God kept him out of trouble, hoping to encourage them to look beyond their current circumstances.

Faith and spirituality are core values at the center. The scripture John 3:17 – which tells of God sending His son to save the world, not condemn it – is painted on the wall. “[God] is all about loving. He is all about second chances,” Mr. Johnson says. “We don’t just throw a kid out of here because he comes in here and acts up. We give him those chances.”