The Man From the East and West

by Matthew Kalinowski from Fredericksburg Academy

Bruce Leehttps://www.azquotes.com/quote/519459       “You must be shapeless, formless, like water. When you pour water in a cup, it becomes the cup. When you pour water in a bottle, it becomes the bottle. When you pour water into a teapot, it becomes the teapot. Water can drip and it can crash. Become like water my friend.” (Bruce Lee). Bruce Lee was a powerful man. A man determined to spread his influence and to mix Easter culture to the West. He was a father, teacher, movie star, icon, and intellectual. He mastered his individual abilities, achieving a success unmatched in the world, from his reign in Asia to his glory in the United States. Bruce Lee became an icon to many and a hero to all. He taught the value of self-reflection and wanted everyone to express themselves freely. Lee expressed himself through martial arts, no matter what people thought of him. As an individual, he was of a mixed ethnicity of Asian and European culture, taunted by many Americans and Chinese. But, through his passion for martial arts, self-discipline, and philosophy, Lee never veered from his dreams. Lee created some of the most iconic films known, such as Enter the Dragon, one of the most popular films in America. Lee displayed an uncharacteristic fighting style in his movies, as he kicked with extreme power, shouted with a piercing, unusual scream. Lee brought to life a sense of coolness, and prestige to martial arts and to action movies.

Lee’s journey began in 1941 when he and his family moved to Hong Kong. In Hong Kong, when Lee was a student in school, he was constantly being taunted by his British classmates for being Chinese. Hong Kong was under Japan's control, putting many Chinese who lived there under much discrimination. Lee, through that discrimination, grew angry and joined a street gang. But Lee, experienced something rather life-changing when he found his love for discipline and began to study under Master Yip Man. Under Master Yip Man, Lee learned a martial art style, Wing Chun. His study of the style Wing Chun had a profound effect on his life. Lee’s fame in Asia began when he started beating his older classmates, who were ranked much higher than he was at the time. Lee demonstrated a willingness to learn the arts, every single minute of the day, he practiced. He progressed so rapidly that the senior students began to complain. Lee’s classmates became so jealous of his development that they wanted to find something that would be able to kick him out of the school. This they did, eventually finding out about Lee’s ancestry, learning that he contained some European blood. The students then began to tease Lee and even forced his master to kick Lee out of the school forever because of his mixed ancestry. Lee was devoted to continuing learning whether people liked it or not, and continued his training. Martial arts had become apart of Lee’s life, as it became a part of who he was, and when Lee was not allowed to show who he was, he showed it anyway. 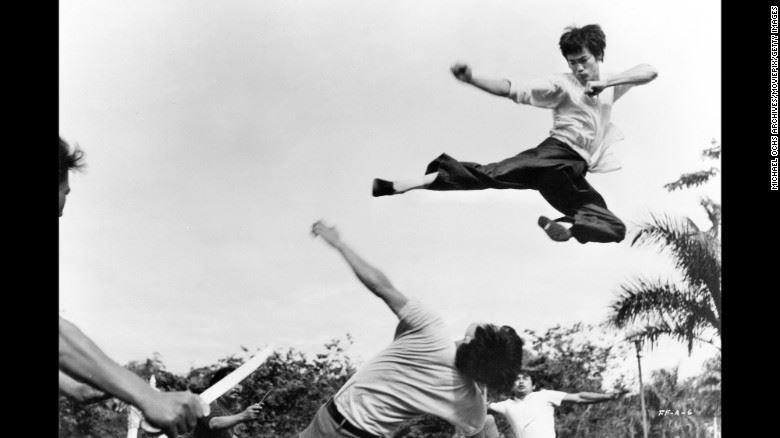 The Big Boss, (Movie of Bruce Lee's)https://www.cnn.com/2016/07/29/us/brucelee-philsophical-legacy/index.html       Lee’s transformation as an individual was not restricted to martial arts. He found a huge interest in philosophy. It was said that Lee had annotated over 1700 books. He had his own library and immersed himself with books on physics, mathematics, history, and philosophy. Lee wrote groundbreaking books, volumes on Taoism, quantum mechanics, psychotherapy, and the power of thinking as a whole. “The philosophy of Lee is more powerful than the martial arts of Lee,” says Little, author of "The Warrior Within The Philosophies of Bruce Lee. Everything that Bruce Lee did flow from his mind and his thinking.” (John Little, author of The Warrior Within: The Philosophies of Bruce Lee). Lee is most credited for his teachings of self-reliance and expressing oneself. Lee devoted this line of thinking to another philosopher in India named Jiddu Krishnamurti, who taught that truth itself cannot be found in religions and taught the art of self-reliance and one must live their life to the fullest in the present. Lee repeated these ideas through various interviews, explaining of how he incorporated this into his martial arts. Every kick and punch from Lee was the flow of his mind as a whole. Every movement was a reflection of his emotions and specifically his chi. Chi, according to Lee, was a free-flowing energy that is reserved deep inside of every individual, and once released can give great strength. Lee felt this power as it influenced every decision and movement he made in his life. Lee used this power to hone his martial art skills, but more importantly, he used this power to reflect and show himself to everyone, specifically in his movies. 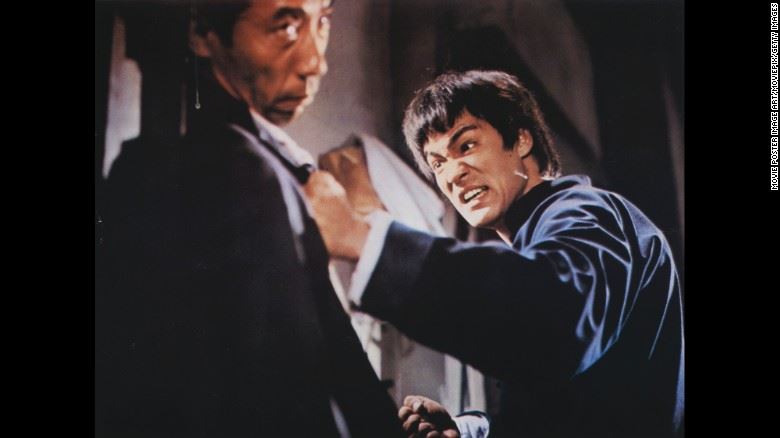 The Big Boss Death Scene, (Scene in the Big Boss)https://www.cnn.com/2016/07/29/us/brucelee-philsophical-legacy/index.html       In Lee’s martial arts films, he had an uncanny ability to attract viewers. He fought in his movies with such a unique style; the strength, the power, and the gracefulness of his abilities were unmatched. Many in the United States found Lee’s movies in Asia to be unattractive until they saw for themselves what made Lee so special. Lee's first and only American film was Enter the Dragon, where Lee incorporated his philosophy and his martial arts into one vast story. Specifically, Lee showed this at the beginning of the movie, when he talked to one of his students about the importance of feeling and keeping the mind in the now but not letting it be distracted. “Don't think. Feel. It's like a finger pointing at the moon. Do not concentrate on the finger, or you will miss all of the heavenly glory.”(Bruce Lee). Famous quotes as such made audiences gasp at the intellectual of this individual, (even at a time when many Americans discriminated against Chinese or really any foreigners). Lee, then awed all viewers, when in one scene, before his opponent and he had to fight, they stared at each other. Lee’s opponent in the movie grabbed a thick board, breaking it effortlessly and looking at Lee. Lee responded with a famous quote, “Boards don't hit back.” (Bruce Lee). Then the battle commenced, and Lee defeated his opponent displaying a style of fighting that almost seemed unreal and fake. But Lee’s character reflected Lee’s entire life, someone who was always questioned, laughed at and did not seem impressive. Lee never gave into what people thought, rather he humbly wanted to teach people better, and showed them the beauty of his gifts. Lee was devoted to opening the United States to the Chinese culture, even when Americans spat at his face. He achieved this by opening his own martial art schools, and even getting a philosophy degree at an American college, in the University of Washington. 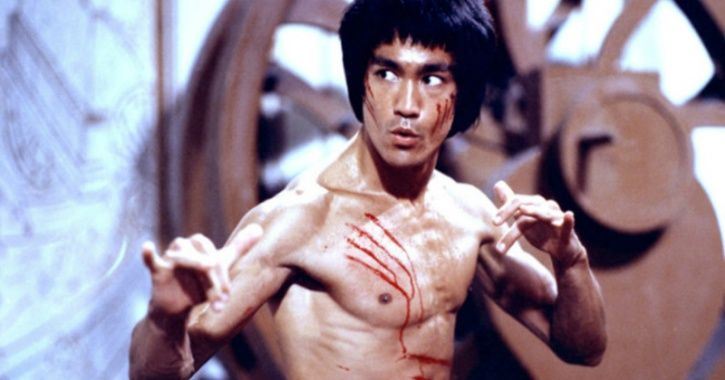 Bruce Lee, (Scene in Enter The Dragon)https://www.indiatimes.com/lifestyle/the-undefeatable-and-unforgettable-legend-that-was-bruce-lee-334501.html       Bruce Lee will go down as the greatest martial artist ever known. No one could match his abilities and determination to be the best and tell his stories. Lee is known as the founder of MMA fighting, and Jeet Kune Do. Opening the way for the mixing of different martial art styles together. Lee involved himself and continued the discussion of abolitionism and human rights. Preaching the equality of all, no matter race or gender. He paved way for martial art action movies, allowing for great movie/action stars: Chuck Norris, Jean-Claude Van Damme, Steven Seagal, and Jackie Chan. Lee is regarded by many as a hero, receiving recognition from many famous publishing companies, like CNN, and even from TV stations, like El Rey. What cemented Lee’s legacy was during an interview, the interviewer asked: “Do you consider yourself American or Chinese?” Lee responded with “You know what I want to think of myself? As a human being. Because, I mean I don't want to be like as Confucius say, but under the sky, under the heavens, there is but one family. It just so happens man that people are different.”(Bruce Lee: The Lost Interview (1971). Even when Lee died, the mark he left on the world was still there. Lee's friends would read countless letters from people, explaining how Lee changed their lives, “I got letters after he died from people from almost all walks of life, from musicians to skateboarder's -- they all said he influenced him,” (Inosanto, a close friend of Bruce Lee).

Lee wanted to create change. He wanted to change the world and open people's minds. All his lessons were for the purpose of learning. He wanted everyone to listen carefully to what he said, to enjoy his movies, but always pay attention to the philosophy and his martial art skills. These skills reflected Lee’s life, it reflected his years of determination through all the hatred that he was given by others. Today, these lessons remain as important as ever. In a world today, was individualism, and creativeness seems to be looked down upon, Lee’s teachings remind us how that is not true. Nations, today, are constantly insulting each other, having loose alliances and such. In a time where all hostility seems so inevitable, Lee reminds us that under the heaven we are all one and together. Discrimination has not gone away, and most likely will never go away, but Lee showed us to not let that affect our lives, rather live our lives to the fullest and be ourselves. Lee remained true to himself and to others whether they liked him or not, and embraced who he was. In America, he embraced his Asian descent, even when people looked down upon him. In China, he embraced his European descent, even when people looked down upon him. Lee remained himself, continuing with his passions of philosophy and martial arts, evolving into a man. This is why Bruce Lee was a hero to all, as he continually believed in himself and his goals. Goals where he wanted to show the Americans martial arts and really introduce Eastern culture to Western culture. Lee never backed down, no matter what circumstances and for that, he is and always will be a hero.