"He that troubleth his own house shall inherit the wind." Proverbs 11:29 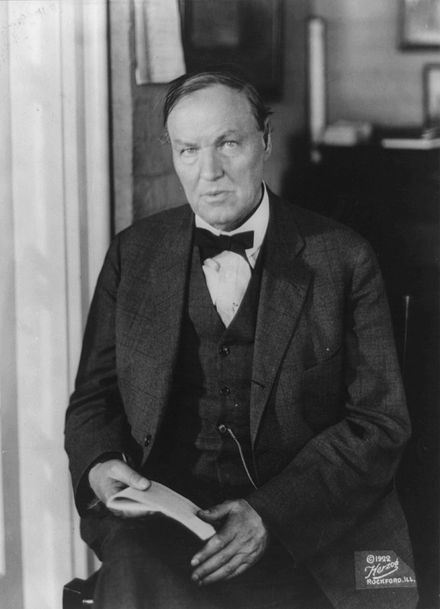 Clarence DarrowHerzog / Public domainClarence Darrow's life has inspired Morris Dees and many other lawyers to use their skills for the benefit of the underclass. Darrow defended anyone who, because of their socio-economic status or the circumstances of their case, would normally not get a fair trial.

One of the most famous of his trials was the "Monkey Trial" in which he defended John Thomas Scopes. Scopes was a public school teacher who wanted to teach Charles Darwin's theory of evolution in his classroom. He was brought to trial because some people thought that this theory threatened their religious beliefs. Clarence Darrow defended Scopes against the state of Tennessee in a very famous case which later would be dramatized in the play and film "Inherit the Wind."

It was the advent of the robber barons which informed Darrow's ideologies and ultimately influenced his professional course. The robber barons were bosses of big industries who exploited immigrant labor, forcing people to work long hours under bad conditions for very little pay. They pitted the workers against each other for jobs, so that instead of joining together, each laborer found he had to defend himself against other laborers. This was all part of the big businessowners' ploys to keep wages low and profits high. Because the robber barons had a lot of money, they could bribe politicians to make laws in their favor and bribe policemen to arrest and prosecute, under any pretext, anyone who stood up for workers.

Darrow began his career in the 1870's, a time when people didn't have to get college degrees to become lawyers. In those days, when such a career was only available to the middle and upper classes, a person (usually a man) had to get an apprenticeship with an existing law firm. An apprenticeship is known today as an internship, but back then it was the only way to become a lawyer. Darrow dropped out of the University of Michigan in order to begin his apprenticeship, and was able to join the bar when he was only twenty-one years old. Afterwards he moved to Chicago and set up a practice there, where he became a well-known public speaker and essayist. He also developed the political outlook which would lead him to some of his most celebrated cases, the ones which America remembers him for today, almost fifty years after his death.In May of 1886, during a peaceful worker's rally at Haymarket Square in Chicago, 180 policemen appeared and ordered the rally to end. As the speaker began to step down from the podium, somebody threw a bomb which killed seven policemen. Although there was no hard evidence to link them, members of an anarchist group, the International Working People's Association, were blamed, convicted, and executed. It was this incident which eventually led Clarence Darrow to become an advocate for worker's rights.

Dayton, Tennessee, has a Scopes Trial Festival every year in the middle of July, and each year the Scopes Trial is reenacted in the courthouse where the actual trial took place. The play, "Monkey in the Middle," is taken almost in its entirety from the court transcripts and gives an accurate summary of what actually happened.

In the year 2000, for the 75th anniversary of the trial, WGN radio out of Chicago (which broadcast the original trial) sent some people down and broadcast the play from the courthouse lawn. One announcer even had a part in the play. If you are interested in what really happened, come and see the play, go through the Scopes Museum, meet some of the locals who remember the trial, and talk with one of the world's experts on the trial.

Morris Dees is a Civil Rights Lawyer who co-founded the Southern Poverty Law Center. He was inspired to do this important work by his hero, Clarence Darrow.