How a Chicago community is bringing its houses back to life

Crushed by the 2008 mortgage crisis, the Chicago Lawn neighborhood is fighting crime by rehabilitating abandoned homes and apartments.

NOVEMBER 25, 2019 - CHICAGO - Many know the violent repute of parts of this city, the shootings, gangs, forgotten main streets, and residential blocks plagued with boarded-up houses and apartment buildings. 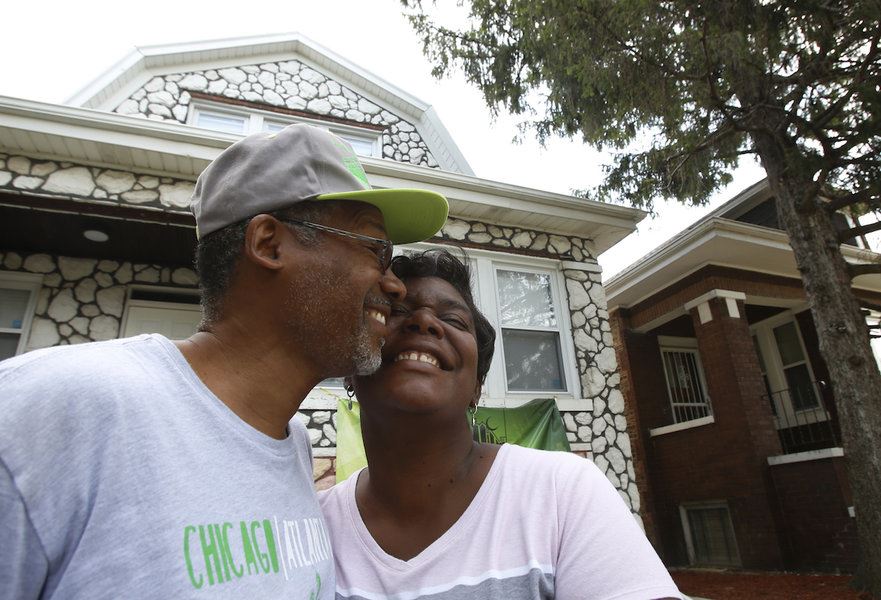 Hasan and Mary Smith stand outside their newly rehabbed home in the Chicago Lawn neighborhood of Chicago on Sept. 11, 2019. After spending decades in prison for gang-related violence, Mr. Smith is helping to rebuild the community he feels he “once destroyed.”Martha Irvine/AP

Chicago Lawn on the city’s South Side was once all that; its streets were littered with abandoned homes, especially after the 2008 mortgage crisis took hold. “In some blocks, it looked like a war zone,” said the Rev. Anthony Pizzo, then a priest at St. Rita of Cascia Catholic church, a rare neighborhood mainstay.

But then, a feisty core of residents banded together to save this place.

They are doing so with an unexpected mix of people in an often-segregated city, with neighbors who don’t always speak the same language, practice the same religion, or trust one another. They are African Americans, Hispanic immigrants, Muslims, Catholics, Jews – and “returning citizens,” men fresh from prison, like Hasan Smith, a former gang member who served nearly three decades for shooting and killing a man in a drug-related crime. He was just 19 at the time.

“I told myself when I get there, I’m going to be running, moving forward,” said Mr. Smith, who came to Chicago Lawn in 2006 in search of a second chance and who helped rebuild a home that is the first he and his wife, Mary, have ever owned. Many others are doing the same, moving into rehabbed bungalows and apartments.

And sparking nothing short of a Chicago Lawn renaissance.

Decades earlier, the Rev. Martin Luther King Jr. marched into what was then an ethnic-white neighborhood to demand fair access to housing for African Americans who’d been limited to slums by redlining. Met by angry white protesters, Rev. King was struck with a rock and temporarily deterred.

The racial makeup of the neighborhood began to shift as many whites left the South Side. By the 1990s, Chicago Lawn was tipping to majority African American with a Hispanic contingent that also steadily grew. Many who came here were first-time homebuyers, a trend that only grew as the housing market boomed.

But because of language barriers or confusion over loan terms, such as adjustable rates, many were perched precariously on the edge of the housing bubble when it burst in 2008. Some with lower credit scores also had received subprime loans with high interest rates.

Rev. Pizzo joined organizers from a neighborhood organization, the Southwest Organizing Project (SWOP), as they called for bank protests in 2009, ultimately working with the banks through repayment, credit counseling, and refinancing to save more than 500 individuals and families from foreclosure.

The neighborhood was a gang-ridden “ghost town,” Mr. Smith recalled. But he was determined to make it work. Having converted to Islam in prison, he moved into a halfway house apartment owned by the Inner-City Muslim Action Network (IMAN) and became the first graduate of the organization’s reentry program, which teaches former prisoners work and life skills.

Eventually, he got his general contractor’s license and became a construction mentor to others like him, just as the community was coming together for the next phase – rebuilding the neighborhood.

By 2012, there were at least 665 abandoned homes and apartment buildings in Chicago Lawn, counted by staff and volunteers at SWOP. They called upon outside supporters such as United Power, a large coalition of Chicago neighborhood organizations and churches, and recruited volunteer attorneys, a property developer, and one large early funder, the MacArthur Foundation, also based in the city.

They would, they decided, raise funds and buy up corner properties to spark redevelopment. They would, as they put it, “reclaim” the neighborhood and started with a rally, passing the hat as attendees threw in $5, $10, maybe $20. MacArthur pledged $500,000.

Lisa Madigan, then Illinois attorney general, added $3 million from funds that Illinois, other states, and the federal government received from five of the nation’s largest banks accused of fraudulent foreclosure-processing tactics in Chicago and elsewhere.

Then Illinois Gov. Pat Quinn pledged $4 million more and tax credits, giving the neighborhood collective enough to leverage what they had for grants and low-interest loans.

The group began with a 20-block area in Chicago Lawn, among the hardest hit with 93 vacant buildings. The first project – a 13-unit brick apartment building – was finished in 2016.

Jamillah Rashad and her two children were among the first to move into one of the apartments in a neighborhood from which her brother had been chased when he was in high school because he “didn’t belong.” Now for the first time in her adult life, she was putting up artwork on her walls.

“I never sat still enough to feel like I existed in a place long enough,” said Ms. Rashad, who works in early childhood education.

By last year, all but eight of the original 93 properties in that first target area had been rehabbed – some by SWOP, some by IMAN and others by private developers. Of the original 665 vacant homes and apartment buildings, more than 300 are now filled, with more to come. Police data also shows that violent and property crimes in Chicago Lawn have dropped about 45% since 2008.

That success prompted Illinois lawmakers this summer to approve an additional $12 million for more rehabs – and another $3 million to bring this model to North Lawndale, a West Side neighborhood racked with violence and poverty.

The next major goal is to rebuild “1,000 homes on the South Side and 1,000 homes on the West Side,” said Nick Brunick, an attorney and leader with United Power. As he sees it, this successful formula – also being used in places such as New York City – could help struggling neighborhoods across the country.

Hasan Smith sees his contributions as his “chance to give back to the community that I once destroyed.” He and his wife moved into their new home this fall.