Li Wenliang was detained by police in December after warning people about the new coronavirus on social media. His death has reignited outrage over the Communist Party's lack of transparency and accountability.

FEBRUARY 7, 2020 - BEIJING - The death of a young doctor who was reprimanded for warning about China's new virus triggered an outpouring Friday of praise for him and fury that communist authorities put politics above public safety. 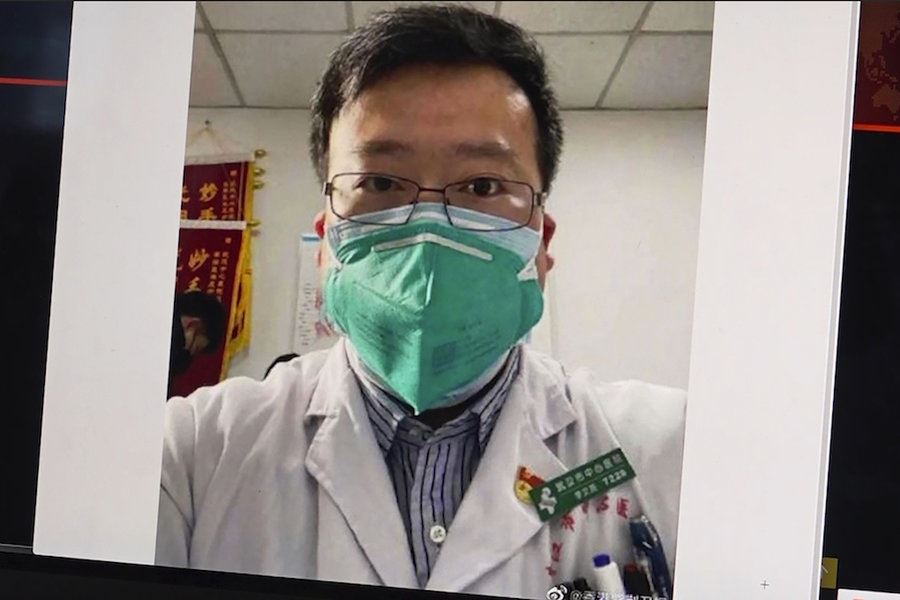 Dr. Li Wenliang was one of eight Chinese doctors who were reprimanded by government officials for warning people in December about the virus. He died on Feb. 7, 2020.AP

The ophthalmologist died overnight at Wuhan Central Hospital, where he worked and likely contracted the virus while treating patients in the early days of the outbreak.

Police in December had reprimanded eight doctors including Mr. Li for warning friends on social media about the emerging threat.

China's supreme court later criticized the police, but the ruling party also has tightened its grip on information about the outbreak.

A post by one of Dr. Li's coworkers, an emergency room nurse, said the freezing Wuhan weather was "as gloomy as my mood."

"To you, we are angels and so strong. But how strong a heart can watch the people around me fall one by one without being shocked?" wrote Li Mengping on her verified account.

Others placed blame for the deaths on Chinese officials, not the virus, and said those who made trouble for the doctor should face consequences. The most pointed online comments were quickly deleted by censors.

The ruling party has faced similar accusations of bungling or thuggish behavior following previous disasters. They include the 2003 outbreak of SARS (severe acute respiratory syndrome), a 2005 chemical spill that disrupted water supplies to millions of people in China's northeast, sales of tainted milk that sickened thousands of children, and the failure of private finance companies after the global economic crisis.

In each case, officials were accused of trying to conceal or delay release of information members of the public said they needed to protect themselves.

The party often responds by allowing the public to vent temporarily, then uses its control of media and the internet to stifle criticism. Critics who persist can be jailed on vague charges of spreading rumors or making trouble.

On the streets of Beijing, the capital, residents expressed sadness and said that China should learn from Dr. Li. "Those left do not dare to speak out," said Ning Yanqing.

Some online comments Friday hinted at broader dissatisfaction with the party and Chinese President Xi Jinping, who has tightened controls on society since taking power in 2012.

The most powerful Chinese leader since at least the 1980s, Mr. Xi gave himself the option of remaining president for life by changing the Chinese constitution in 2018 to remove a two-term limit.

Referring to one of Mr. Xi's propaganda initiatives, a message that circulated on social media said, "My 'Chinese Dream' is broken."

In Wuhan, local leaders were accused of telling doctors in December not to publicize the spreading virus in order to avoid casting a shadow over the annual meeting of a local legislative body.

As the virus spread, doctors were ordered to delete posts on social media that appealed for donations of medical supplies. That prompted complaints authorities were more worried about image than public safety.

Mr. Li was detained by police after warning about the virus on a social media group for his former classmates.

The latest episode is unusually awkward for the ruling party because Mr. Li was a physician, part of a group who are regarded as overworked, underpaid heroes who are China's line of defense against a frightening new disease.

"He showed a responsible attitude toward the society," said Cai Lin, a Beijing resident. "He is honest and faithful. So I think the whole society should reflect on this."

The World Health Organization, which has complimented China's response to the outbreak, said in a tweet that "We are deeply saddened by the passing of Dr. Li Wenliang. We all need to celebrate work that he did on" the virus.

The official propaganda apparatus tried Friday to mollify the public.

"Some of Li Wenliang's experiences during his life reflect shortcomings and deficiencies in epidemic prevention and control," said state television on its website.

The Chinese ambassador to Washington, Cui Tiankai, said in Twitter, a service the ruling party's internet censorship blocks the public from seeing, "Really saddened by the death of Dr. Li Wenliang. He was a very devoted doctor. We are so grateful to him for what he has done in our joint efforts fighting against #2019nCoV."

The government announced a team from Beijing would be sent to Wuhan to investigate "issues reported by the masses involving Dr. Li Wenliang."

This story was reported by The Associated Press. AP researcher Chen Si in Zhengzhou, China, and video journalist Olivia Zhang and researcher Yu Bing in Beijing contributed to this report.