by Jennifer Kwon from San Diego, California in United States 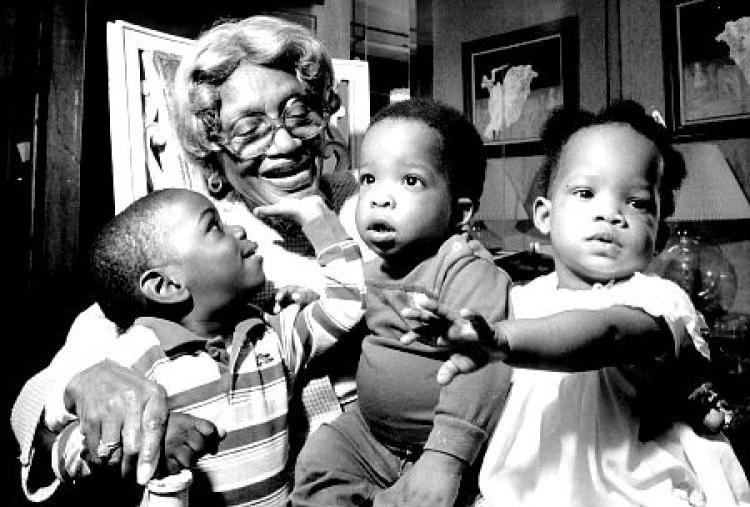 Clara Hale shows her happiness in taking care of childrennydailynews.com“Who nurtured hundreds of abandoned and orphaned babies, the most fragile victims of New York City's epidemics of drug abuse and AIDS, died yesterday at Mount Sinai Hospital” (Lambert). Clara Hale also known as “Mother Hale” was determined to give everyone a chance to live a full life. Hale constantly lived with intention and never once second guessed in what she believed in. The Hale house was where the many foster children had a place to call home it is credited with helping the futures of hundreds of babies. Clara Hale was born on April 1, 1905, in Philadelphia, Pennsylvania, the youngest in a family of four. Her mother was the main influence during her childhood, and her father died when she was a baby. Her mother was a strong woman who supported the family by having multiple jobs. She told them to be, proud  and face the world with pride. Hale took over thousands of kids and babies and continued to nurture them until her time was up. Clara decided to follow her mother's words and steps by facing the world with pride and always having confidence. Hale became passionate about something and took the first few steps in leading into the right direction by creating a home for children. After, people started volunteering and communities came together to help find better alternatives to kids in need of nurturing. Everyone is capable to help others but a real hero shows no hesitant and finds a way to bring awareness and shows full leadership. Clara Hale possessed all the traits of being a hero she brought hope and assistance to the less fortunate. Her founding of Hale House, a home for drug-addicted and AIDS-infected children allowed her community and many more to come together. A hero must possess consistency and lead by example.

Hale guards the childrenWikipediaClara Hale was a guardian to children and cared for others with the idea of not getting anything in return. She believed each and every child had a purpose in life: “I am not going to give it up, Mrs. Hale said primly as she supervised the supper of four well-mannered 2-year-olds. These are God's children and he intends them to be here and for me to take care of them” (“Hale House Fights”). Hale was extremely heartfelt about the unfortunate. She nurtured the babies that didn’t have the chance to have a proper childhood due to complications. That not only is showing that Hale is a guardian to children but this shows the love and vehement she has toward them. She sought the better future for each and every kid from the start. Hale may have sacrificed a lot of time but from a young childhood she always wanted to help others. She didn’t act for attention but kept living for a passion and strived to give to others first. She truly decided to take time and tend children. Hale possess a heroic trait which is caring and acting to others without notice.  Hale sometimes had a simple reason on why she decided to pursue excellence, everything she was doing was a reflection of what she feels happy about: "I'm not an American hero. I'm simply a person who loves children, Mrs. Hale said recently. We hold them and touch them. They love you and tell you how great you are, how good you are. Somehow, even at a young age, they understand that. They're happy, and they turn out well" (Lambert). Clara thinks about doing the right thing instead of doing what will benefit her. She offered to help without being asked. Hale cared for these children and gave her all to make sure they not only were safe but also happy.  Clara lived with a purpose in mind and something she felt compassionate about. She put someone else, day by day in front of her, she also owns a quality of excitement for guarding children. Clara shows full understanding of excellence by doing what she loves. She found a way for kids with a health disability or with parents taking medical actions to have a second shot to rebuild their life. To conclude Clara Hale influences the idea that she’s going to focus on what she is fervent about and what makes an individual feel safe acting as a guardian. 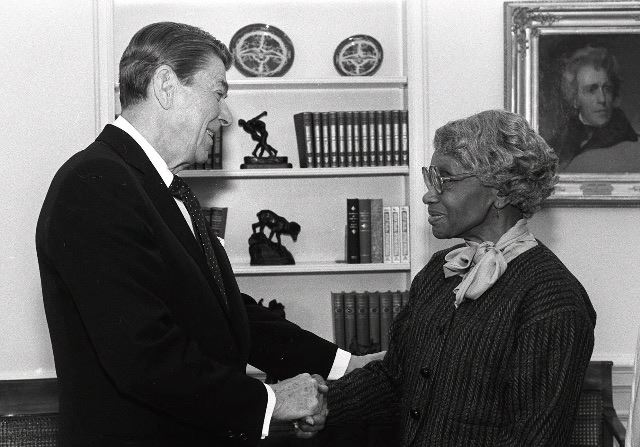 Hale meets former President Ronald Reaganthebigdm.comClara Hale lived with purpose in mind and put someone else’s needs before hers. Hale shows understanding of the children and explains, ''She's 2 weeks old, she has a heroin habit and she's crying for something she doesn't understand,'' Mrs. Hale said the other day. ''There's nothing much I can do but hold her and tell her: 'I love you and God loves you and your mamma loves you. Your mamma just needs a little time ''(“MAMMA HALE”). Hale took babies under her arm and adored them as her own. She tried to understand them and tried her hardest to create a lifestyle that would be the best for them and their mothers. Clara not only took them under her arm but gave credit to someone else to let the children believe and value themselves. A hero should try their best in anything they try to do. She tried her hardest to make the kids feel safe. Not only did she live with purpose in her life but also gave the young children a purpose to live. Hale put the kids as the center of attention all the time: “What did Mrs. Hale want for her birthday? ''Nothing,'' she said softly. ''Just to see the children, that's all I want.'Mother Hale's sincere, and she's so full of love,'' said Police Officer Rocco Poveromo, a guest at the party who regularly visits Mrs. Hale while patrolling his beat. ''She makes my job feel more rewarding” (Dunlap and Rimer). Hale lived with a purpose in mind, because her purpose is always love, it’s never the intention to get something back in return such as money or recognition but because she wants the reward of love and the children feeling loved. She always put others before herself even on days where it should have been about her, it was always about someone else. She lived with pride and saw the children as a gift. She lived a life so proud and focused on what she was capable of doing instead of what she could not do. Hale devoted her life to always put someone else in front of her for the benefit of seeing them happy.

Clara McBride Hale pursued her passion of helping the unfortunate children, she went beyond and not only nurtured them but gave them an aspiration in life. She gave the children a safe place to call home and strived to pursue happiness in everyone she met. Hale’s unflinching determination allowed her to change other people’s lives. To the children who didn’t have someone to look up to Hale found herself in the position as to take care and be a role model to those kids. Little did she know that she was becoming a role model to everyone else. “[I]t is not difficult to understand why those who knew Hale adopted the appellation of "Mother" when referring to her. It is difficult to comprehend the extraordinary sense of love and commitment that must have driven Hale to suffer with these babies. Keeping the babies clean and fed, a maxim at Hale House, must have been a burden by itself. Many were premature and sickly. Some had become addicted to heroin in the womb. The babies often suffered from shaking fits and shivering. They would scratch at their own bodies and make themselves bleed” (“Clara Hale biography”).  For these reasons Hale pursued excellence and went beyond what anyone would think would be impossible to accomplish. She sought the better future for each and every kid from the start and was a hero for her dedication and commitment for the better future.

'MAMMA HALE' GIVES HOME TO BABIES OF ADDICTS - Story of Hale's work and accomplishments on seeing the brighter and better future
NEW YORK DAY BY DAY; A Loving Tribute To a Generous Heart - Thank you letter for all that Hale has done, after she passed away.
Clara Hale, Founder of Home For Addicts' Babies, Dies at 87 - Some of Hale's greatest accomplishments up until the end.