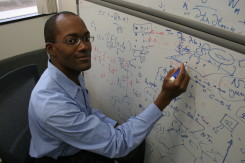 As a very young boy, he was driven by a desire to figure out how things worked, teaching himself electronics from the books his father, a telephone engineer, left lying around the house. One day, he found out that figuring out how things work is what a scientist does, so a scientist he would be. But when asked what kind of scientist he wanted to be, Johnson was annoyed: there were different kinds of scientists? He sat down with a dictionary and went through every "-ist" and "-ologist" he could find. There it was: physicist. The definition, Johnson remembers, was deliciously vague—something like "someone who tries to understand everything." So a physicist he would be—just to leave his options open.

Now a physicist at the University of Southern California, Johnson makes it his job to ask the biggest questions we can ask about our universe. He and his colleagues work at the cutting edge of physics, inventing the tools that physicists use to understand what the universe is made of and how its components interact with one another, in an ongoing mission to “understand and describe the origin, past, present and future of the Universe."

Johnson filled his childhood with creative, experimental activities, always facilitated by the fact that he had no television.

"I think I had time for two childhoods because I didn’t really watch TV that much," he says.

Instead, he would spend his time reading electronics magazines, repairing discarded cameras and radios, and, in the summertime, pursuing elaborate engineering projects that would quickly take this ten-year-old way out of his league. What began with a plastic bottle and some string—intended for a remote controlled submarine—quickly mushroomed into a project fit for a team of professional engineers as Clifford’s imagination and ambition led him to spend hours designing fancy electronic components for the interior of his submarine: radio-control, diving capabilities, torpedoes. Still, he found satisfaction in designing something from scratch and working out how he would build it if he could.

In addition to engineering, Johnson would experiment. One of the most amazing discoveries he made as a ten-year-old involved a simple cooking operation. Johnson wondered why, while watching his mother boil rice, there would always be so much more rice at the end than she had put into the pan. Either the rice grains were somehow multiplying, he reasoned—or, they were getting bigger. What followed was one of his favorite experiments. He set a pan of water boiling, placed in it a single grain of rice, and waited. Sure enough, when he took it out again, the grain had swollen.

"And I thought, Wow! That was it!" he says. "It was just great: the process of wondering something and then designing an experiment that would answer the question."

As a string theorist, Clifford Johnson is still asking questions about the way the universe works. He studies string theory, a revolutionary way of looking at what the smallest particles in the universe are made of. String theory describes the basic constituents of the universe as "strings," one-dimensional objects that vibrate and interact with each other to make everything in the universe. The way a string vibrates determines whether we detect it as one kind of particle or another.

Like many physicists, Johnson is attracted to string theory because although it has not been proven yet, it explains a lot about the universe that other theories cannot. For example, quarks—the tiny particles that make up protons and neutrons, from which atoms are composed—cannot be isolated from other quarks. In fact, if you try to separate two quarks, you end up creating more. String theory explains this phenomenon: imagine that quarks are the "ends" of strings. If you try to separate them, you stretch the piece of string that connects them, until eventually the string snaps in two. What do you get? Two pieces of string, each piece with two ends, giving you twice as many quarks as you started with.

But it was the problem of quantizing gravity that attracted Johnson to string theory when he read about it as an undergraduate at Imperial College, London University, in the late 1980s.

One of the ultimate problems in physics is that of quantizing gravity, or bridging the physics of stars and planets with the physics of subatomic particles. There is one set of physics that describes things that are very, very large—the motion of planets, stars, galaxies, and why you aren’t floating on the ceiling as you read this. There is another set of physics that describes things that are very, very small—the interaction of the subatomic particles that make up our bodies and everything we see, including the light we see it with. The first is Einstein’s theory of relativity; the second is quantum mechanics; and together they are the pillars on which all modern physics is based. But there is one problem: the two theories are fundamentally incompatible. String theory resolves this incompatibility, turning two theories which cannot coexist in the same universe into one theory which even explains why the physics of the large and the physics of the small seem to be so different from each other.

As a Ph.D. student at the University of Southampton in the early nineties, Johnson, his advisor, and another student constructed a whole new family of mathematical models for string theory that are still used by physicists today.

We have mathematical models to describe what happens to strings when they do not interact with each other. If the strings do interact with one another—which they do in the context of the theory—it becomes impossible to solve the problem exactly, but you can still use the equations for non-interacting strings to find an approximate answer. But in models of string theory where the strings are interacting a lot with one another—constantly running into each other, snapping, and reconnecting in different ways—the models become so complicated that physicists can no longer even approximate the answers to their questions. Johnson’s job is to develop new mathematical models—a whole new set of equations—for describing and solving problems in string theory when the strings interact with each other so often that the current models cannot hope to describe them.

String theory is the ultimate between-the-lines field, says Johnson, because although it has been around in one form or another since the 1960s, no one really knows what it is yet.

"I know that sounds a little weird," Johnson says, "but in some well-defined sense no one actually knows what it is per se."

Instead, string theory is defined in terms of other kinds of science, evolving by borrowing ideas from wherever it can find them in other fields of physics—particle physics, relativity, and huge areas of mathematics.

"It’s a nice example of a field which has exploited the ability to borrow from different fields and put different things together to make something new." He laughs. "And it may turn out to be wrong."

The lack of television during Johnson’s childhood did more than give him the time to explore the way the world works. It also spared him an exposure to the negative imagery in the media that might have discouraged him from doing the science he loved because of his race. Growing up in the sunny Caribbean, without a television, Johnson says he was isolated "in a good way."

"I didn’t know I wasn’t supposed to be a physicist," he says. "It’s the race thing: people look at me and they don’t expect me to be a scientist."

The average black kid growing up in America, Johnson laments, does not have access to enough imagery telling him anything positive about wanting to be a scientist.

"There’re a lot of people out there who are creative kids who don’t get opportunities to do science, or don’t even realize that there are kids like them in similar situations who also want to go into science careers."

For Johnson, education—especially science education—is by far the most important single thing that helps a society move forward. Therefore Johnson believes it is vital for every society to have a large proportion of its population be technically educated.

So one day while chopping carrots Johnson thought of starting an annual event that would bring people together in Africa to talk about science. Finding donors to help fund the event himself, he founded the African Summer Theory Institute, which brings teachers, researchers, and students of all levels together for a month-long conference on a science topic—a different one every year—to discuss, to network, and, of couse, to learn. He engineered the first ASTI event in 2004 in Capetown, and is currently gathering funding for a second.

"We can go to other countries or continents. We can give them sacks of grain, and that’s all very nice—" he emphasizes that this is indeed important—"but we’re not actually going to solve any problems long-term unless we educate those countries’ people—help them to figure out how to think for themselves, manufacture things, contribute on the world stage scientifically and technologically…and basically unlock all of that talent."

Johnson advises young people who are stimulated by the sciences to remain aggressively curious.

"Keep asking questions and finding ways to answer them," he says.