Coalition of Women
for Peace

There is no democracy without peace
and no peace without women.

--anonymous, one of the slogans used by the Coalition Of Women For Peace

We Jewish and Palestinian women, citizens of Israel, representatives of various women’s organizations and individuals have agreed to coordinate and organize joint activities in order to work together for a just peace...

The Coalition of Women for Peace is made up of a group of various peace groups from both sides who have joined together to end the conflict between Israelis and Palestinians. Their goals include making women a key part of the peace process, ending militarism, and establishing a Palestinian state as determined by the borders created in 1967.

The coalition includes members from the The Fifth Mother Movement, which is a key organization for peace in the Middle East. Founded by former members of The 4 Mothers and Women In Black, they raise a "call for women, mothers, grandmothers, sisters and girls to raise their voice, the woman’s voice, the other voice which is not heard in this country!" They believe in diplomacy rather than war and violence; words rather than bullets.

The 4 Mothers movement was started when four mothers protested Israeli forces invading Lebanon. These Israeli mothers decided that peace and life took precedence over an unjust war, and were determined to make their voices heard. Their voices carried all the way to former Israeli Prime Ministed Ehud Barak, who began dismantling the forces in Lebanon. The 4 Mothers movement had accomplished their primary goal, but there was still violence raging all around them. Their members decided to form another group which also encompassed members of Women in Black, to put their strength to another challenge--peace between Israel and Palestine.

Another member of the coalition is Bat Shalom, which is "a feminist peace organization of Israeli women" which aims to establish peace between Israel and its Arab neighbors. The organization also seeks to establish a Palestinian state to coexist with Israel, with Jerusalem as the capital of both.

Bat Shalom works with The Jerusalem Center for Women, a Palestinian women's organization also focused on promoting peace. These two organizations together make up a larger organization called The Jerusalem Link. They say, "we work together toward a real peace – not merely a treaty of mutual deterrence, but a culture of peace and cooperation between our peoples."

Terry Greenblatt, the director of Bat Shalom, said, "As women we want to be able to look our children in the eyes, without shame, and tell them that injustice was committed in our name, and we did our best to stop it. Even when we are women whose very existence contradicts each other, we will talk--we will not shoot." 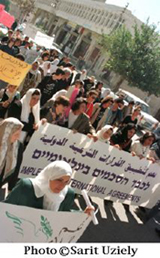 The coalition declares these as its principles:

Mothers across the globe are working for peace--for themselves, for their children, and for the future of the world.

Women's World - is an organization that supports the combination of rights, literature and development in ending conflict. They detail the struggle between Israelis and Palestinians.
"Voices Not Heard in Mainstream Media" - is an article from Ms. Magazine.